This is not Islam 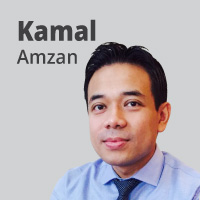 MAY 2 ― I miss the “good" old days when national headlines were worth reading. The papers spoke of the North-South Highway, the Multimedia Supercorridor, the building of a super expensive, beautiful and elegant airport.

We debated the pros and the cons of having not one, but two Petronas Towers, were excited by the introduction of PPSMI, took pride in hosting the Commonwealth Games, and showed other Muslim countries what we could do by chairing the OIC.

No matter our political opinions, we were a good example of moderation, tolerance, and how a Muslim majority country can progress while remaining peaceful, stable when others failed.

But fast forward to 2014 and we have regressed. We are headless, rudderless and spineless as we wade into the 21st century and head towards where other basket case countries await us.

We display similarly frightful symptoms. We started and perfected the art of banning artists, books, comics and cartoons deemed offensive to Muslims. A similar fate befell yoga, Poco-poco, Valentine's Day and the latest kerfuffle was on how to offer condolences to non-Muslims.

People who claim to be religious scholars demand that non-Muslims tread on eggshells around Malaysian Muslims, assuming that Muslims are spiritually, mentally and psychologically handicapped, whose feelings are very easily bruised and hurt.

Quran (7:198-189), “When you invite them to the guidance, they do not hear. And you see them looking at you, but they do not see. You shall resort to pardon, advocate tolerance, and disregard the ignorant.”

Have the scholars not read the Quran?

What happened to the thousands of religious teachers we spent so much on for an education in failed Muslim countries? What are they learning over there?

Sometimes I wonder whether our leaders realise we are on the path to a disaster that could lead to irreparable, unimaginable damage to the social fabric that currently binds us all together.

Because if they do, they would not agree to PAS's version of hudud.

Not withstanding the fact that we are a secular country, there is absolutely no need for it in Malaysia.

What are we trying to achieve? Are we trying to free up prisons? Create more one-handed people for vocational teachers to train? Or instilling fear among citizens and visitors, and to send investors with employment opportunities away?

Or worse, are we trying to be Arabs? Or other failed Third World Muslim countries? Or perhaps the Bruneians?

Believe it or not, Islam emphasises justice. And as long as our system is just, work is done to improve and enforce the existing laws to serve and protect both the accused and the accuser while keeping abuse in check ― that is Islamic enough.

Imagine, for instance, the social impact it will have when you start prosecuting and punishing women who got pregnant out of wedlock.

Can you anticipate the rise of illegal abortions and the number of babies dumped? Or the proliferation of black market babies?

What about those who steal? How would you put a price on one's limb? A fine for an offense less than a hundred ringgit, a finger for anything less than five hundred, and a whole limb for anything above one thousand ringgit?

And who determine all this? Mortals and sinners who spy and videotape couples? The people who ban books and discourage religious discourse? Self righteous authorities who determine what Muslims can and cannot watch?

Well, someone has to decide because you cannot find any of this in the holy books.

Is this the justice you want? Is this the Islam Malaysian Muslims deserve?

I don't think so.

If only the people in PAS and Umno take a moment to reflect and use their God-given brains to think, they will realise that their brand of hudud has the potential to do more injustice than justice.

Replacing a system that has served us well, with one that has not been proven to work elsewhere is irresponsible. Disguising it in the name of Islam is plain disgusting.

Even if their aim is to create an “Islamic” state, they do not need hudud. As long as we do not starve, have adequate and affordable housing, opportunities for education and live in a just and equitable society, this is as Islamic as it gets.

They should work on eradicating wastages, excessive luxury, corruption and they'd be well on their way to heaven.

This of course applies to those who really want to see a better Malaysia. People who are only interested to score political points using Muslims and Islam as their pawns will not stop until the whole nation lie in tatters with nothing left to loot and gain.

I hope I will not live to see the day where the Muslim parties and non-Muslim parties are pitted against each other. While we work towards a two-party system, the two parties must be multiracial, multicultural and multilingual instead of a religious-based coalition of political parties pitting my religion against yours.

Speak up now, your chance is fast approaching an end.

Perhaps our leaders would do well to ponder what Muhammad Abduh once said, “I went to the West and saw Islam, but no Muslims; I got back to the East and saw Muslims, but not Islam.”

The next time you do something in the name of Islam, ask yourself if it is really Islam you think about. It might just cost you your head.