In Rengit, a Bumiputera community lives in neglect as politicians thump chests ahead of Johor polls

A general view of Pasar Karat Rengit, a flea market run by Orang Asli traders where most of the settlement's main commercial activities take place. — Picture by Hari Anggara
Follow us on Instagram, subscribe to our Telegram channel and browser alerts for the latest news you need to know.
By KENNETH TEE

KUALA LUMPUR, March 8 — Norshahirah Yusof shares a cramped two-bedroom single storey house with her eight siblings and their mother in Kampung Bumiputera Dalam, an Orang Asli settlement located about 1.7km from the town of Rengit in Johor.

Since five years ago, the zinc roof over their heads has been leaking every time it rains, causing a noticeable dank smell inside, as on the day Malay Mail visited while on the Johor election campaign circuit.

“We did apply for assistance to repair the roof but it kept failing,” the 24-year-old Norshahirah related.

She said the village head also tried to help them with the application process, but that too failed.

Norshahirah said she and one older brother had previously been employed as factory workers in neighbouring Benut, about 13km away.

The onset of the Covid-19 pandemic however changed everything for Norshahirah and her family. She and the brother are currently unemployed after being “temporarily released” by the factory management some five months ago.

“We’re still waiting for the factory committee to inform us of any changes,” she said, adding that some of the able-bodied siblings would occasionally collect sea snails near the coastal waters off the village to sell. Norshahirah Yusof speaks to Malay Mail during an interview at her home in Kampung Bumiputera Dalam, Rengit March 4, 2022. — Picture by Hari Anggara

Norshahirah seemed dumbstruck when asked about her aspirations now that she could vote in the Johor state election this Saturday, now that the automatic voter registration system has been implemented.

Slowly, her voice tinged with nervousness, she expressed her vague wish that better things would come for her family.

Norshahirah’s mother was in Batu Pahat town, some 35km away from the settlement, for a scheduled health check-up when Malay Mail dropped in. Her eldest brother who works as a fisherman was similarly out.

On most days, the male members of the family would go to the nearby Rengit Wet Market to earn a daily wage while the rest stay home to care for their single parent.

Their abode is the most basic definition of a house. The two bedrooms are concealed from view by makeshift curtains. A busted motorcycle is parked right in the living room. Some wooden chairs are parked in a corner and clothes are piled in a bundle off the floor.

The dark kitchen with its bare concrete floor is located off the living room, lit during the day by natural sunlight pouring in from the ventilation holes and the gap between the walls and the roof. There isn’t really a ceiling to speak of.

The little decoration in the house can be seen on a mustard yellow wall. Like their house, photos of Norshahirah’s family are cramped inside several picture frames so they end up looking like a collage of sorts. 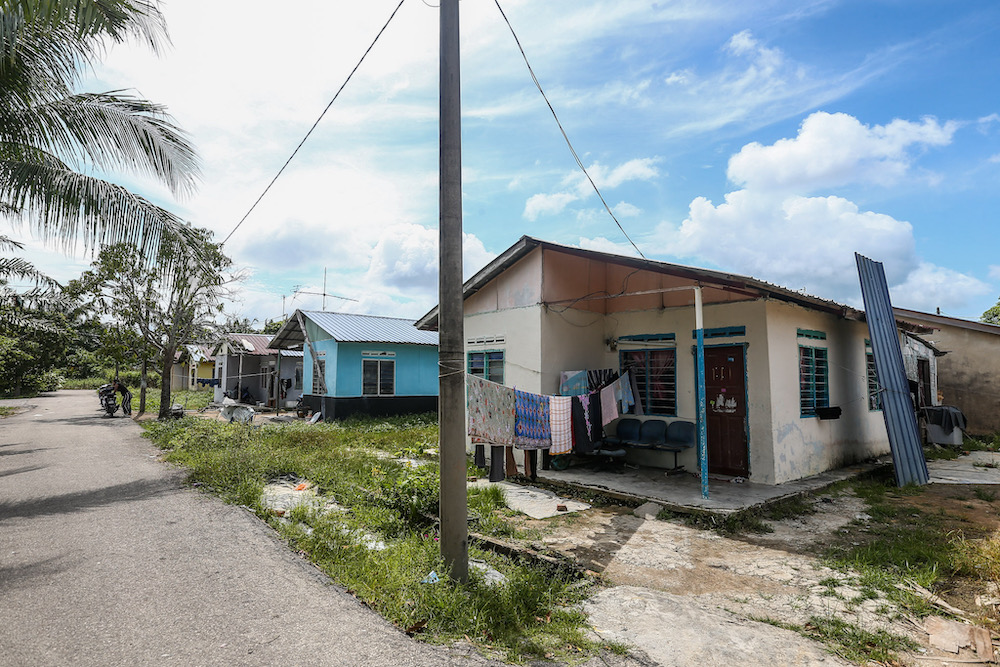 A general view of some of the basic units of housing in Kampung Bumiputera Dalam that are in deteriorating condition. — Picture by Hari Anggara

Norshahirah’s house is not the only one in a derelict condition in Kampung Bumiputera Dalam, which has been home to some 60 Orang Asli families for the past 20 years.

Visitors might be forgiven for thinking they passed through a dimensional portal while travelling to the village from Rengit town; the economic and social disparity is that jarring.

To enter the main residential settlement, one would have to pass through Pasar Karat Rengit — a 500 metre stretch of flea market run by Orang Asli on both sides of a two-lane road — before coming to an intersection with a small tarred bridge leading into the settlement and Norshahirah’s house.

The buildings after that bridge were all single storey. There were enough ramshackle wooden structures in a row that it would be easy to believe you had entered a shanty town instead of a proper village.

The piles of trash sprouting like colourful plastic hedges on either side of the road and in front of the overgrown vegetation is the first sight that greets visitors.

The heaps of decomposing garbage soaking in puddles gave rise to a pungent pong in the aftermath of the rain. The garbage trail led to a clogged stream adjacent to the settlement, which added to the stench. 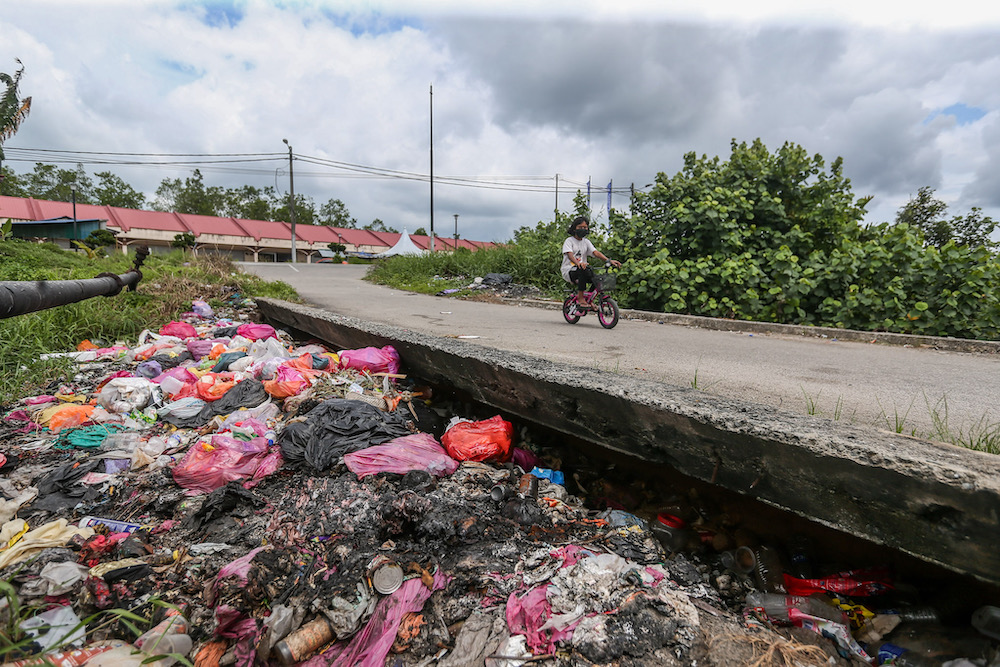 Heaps of decomposing rubbish emit an unmistakable stench of decomposition by the side of the road leading into the main settlement from the main commerce area in Kampung Bumiputera Dalam. — Picture by Hari Anggara

The drains outside the houses, including Norshahirah’s, had been clogged for months. The water was murky black. Residents said the local council has not disposed of the growing trash for a good while.

“Well they do collect, but it only happens once a year. So, many of the villagers have no choice but to dispose of their waste as they see fit,” Norshahirah said, a touch embarrassed.

It is understood that the local council “refused” to collect the waste because those living in the Orang Asli settlement don’t pay their assessment rates or cukai pintu — local land tax collected by local councils to pay for developing and maintaining local infrastructure and services.

Norshahidah’s next-door neighbour is Fatimah Belani who has been living in Kampung Bumiputera Dalam the past 20 years.

While Fatimah’s house was substantially better maintained, the building too had seen better days.

Fatimah rued the meagre assistance provided to the Orang Asli community in the village.

The grandmother said she worked in a shop nearby previously, but was let go when the pandemic hit.

“My son who works at a factory nearby is also unable to return home as he is required to undergo quarantine.

“So in order to feed the family, I tried to apply for assistance but all were unsuccessful,” said the 67-year-old, adding that she had numerous chronic illnesses that made it harder to provide for her grandchildren. 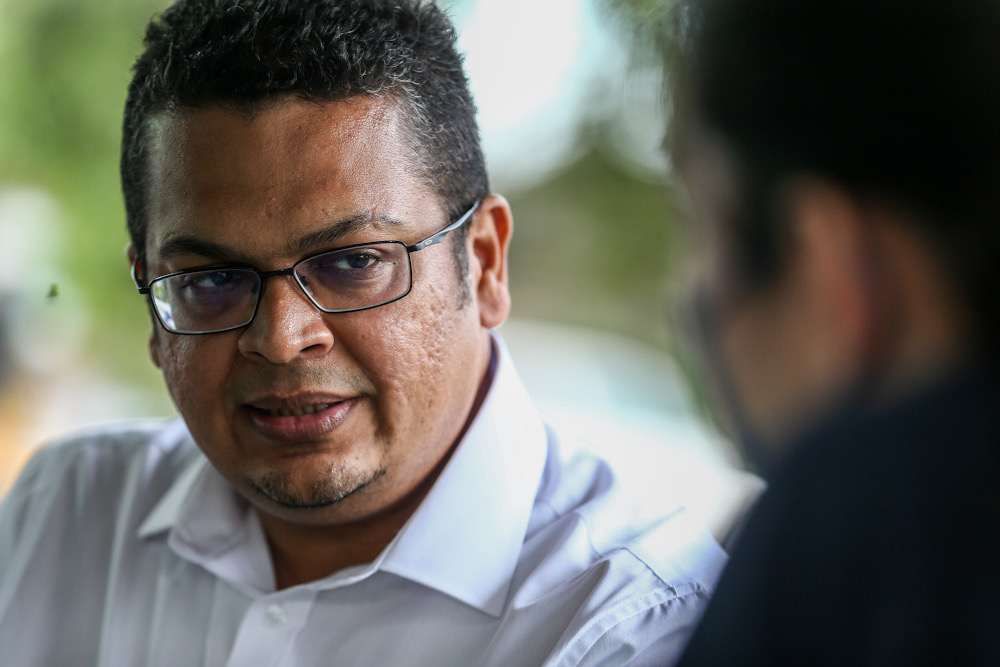 Lawyer Nizam Bashir Abdul Kariem Bashir, who is one of the four candidates gunning to represent the Rengit state constituency, said the living conditions for Malaysia’s indigenous peoples were deplorable.

“It is one thing to provide them with housing, but it's another thing to ensure maintenance is consistently given to all these individuals and families staying here.

“I think that's not too much to ask. Any other voter who is not being given basic amenities will definitely not be voting for the incumbent,” the first-time election candidate fighting under Parti Pejuang Tanah Air told Malay Mail while on a walkabout of Kampung Bumiputera Dalam last Friday.

“So it certainly begs the question, Rengit has been administered since 2004 by Barisan Nasional that this is an issue they have been living through for so many years,” he added.

What came to this writer’s mind was a line from George Orwell’s famous book, Animal Farm: “All are equal, but some are more equal than others”.

Johor voters will go to the polls on March 12 to elect a new state government, with early voting set for March 8.

The previous representative was Ayub Jami from Umno. He was a four-term assemblyman for Rengit since 2004 and was also the Johor executive councillor for housing and local government under the administration of Datuk Hasni Mohammad from March 2020 to January 22, 2022.

Ayub is not contesting in the election this time.