Property damage from the landslide that took place along Jalan Lingkungan Negri Sembilan, Federal Hills October 23, 2021. — Picture by Bukit Bandaraya Residents Association
Follow us on Instagram, subscribe to our Telegram channel and browser alerts for the latest news you need to know.
By ASHMAN ADAM

KUALA LUMPUR, Oct 24 — Residents in Federal Hills are up in arms over a landslide along Lingkungan Negeri Sembilan last night and washed soil down onto a Jalan Limau Purut.

Chairman of Selamatkan Kuala Lumpur — a coalition of resident associations in Bangsar — Datuk M. Ali said the landslide was not a surprise as those who live there have been highlighting these incidents with the Kuala Lumpur City Hall (DBKL) so it can look into developments, preventive measures and enforcement more holistically.

“Much to our disappointment, this incident was not really a surprise as we have been highlighting to DBKL to look at the developments, preventive maintenance and enforcement in a holistic manner.

“This morning, Deputy Federal Territories Minister Datuk Seri Jalaluddin Alias made a site visit to see the reality himself,” he told Malay Mail when contacted today. Ali said that he met DBKL officials on September 18 to ask for a proper water drainage system on Lingkungan Negeri Sembilan, the very road where the land slid last night.

He related that DBKL gave an assurance that work on the drainage system would begin soon.

However, Ali said the damage to the area has already been done.

“We appeal to the concerned DBKL officials at the top management and handling the project at site to communicate with us, in order for them to make the right decisions based on feedback, which we have volunteered to share without any cost for DBKL.

“In fact, DBKL must arrange with Ikram to conduct a thorough study of the entire area of Federal Hill, plus the common shared borders with Bangsar and not just do a cosmetic eyewash,” Ali said, referring to the Public Works Institute by its Malay initials.

Lembah Pantai MP Fahmi Fadzil, who visited the site last night, said that this is a worrying trend as it is the second incident of landslide in the last few months. 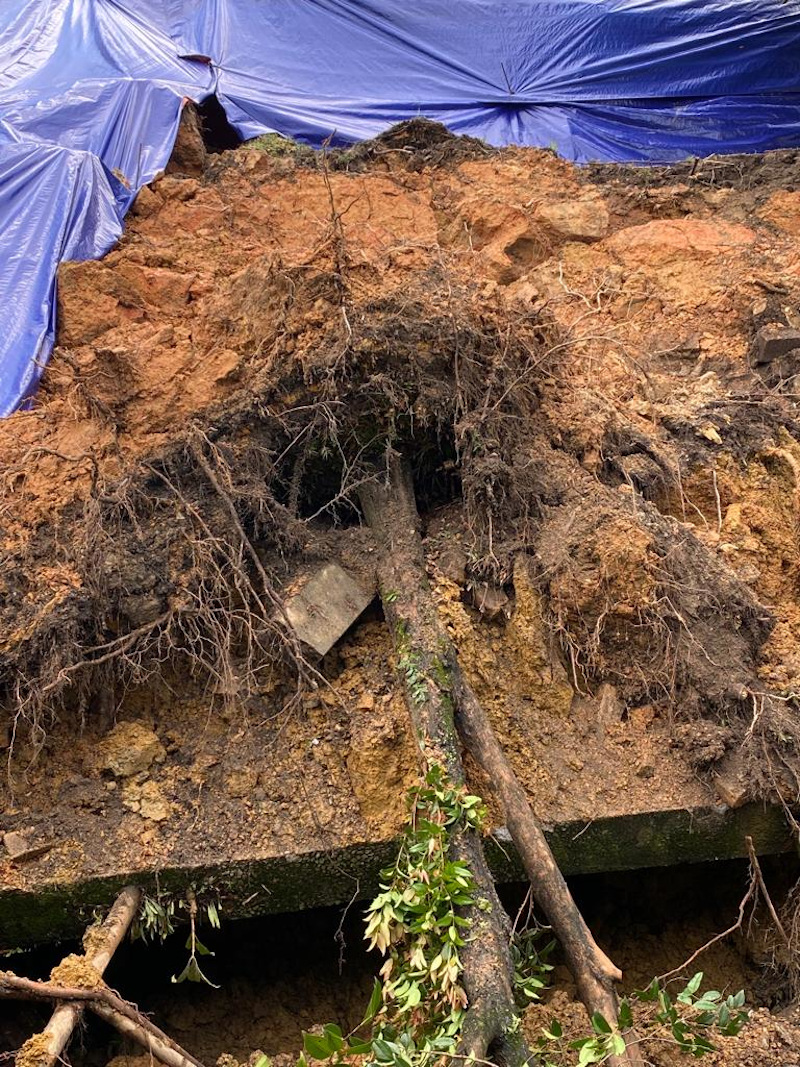 A tree that uprooted due to the landslide that took place along Jalan Lingkungan Negri Sembilan, Federal Hills October 24, 2021. — Picture by Bukit Bandaraya Residents Association

According to a preliminary report by the Fire and Rescue Department, the soil slipped down from the shoulder of the main road along a 40-metre stretch at 7pm last night.

Fahmi later told The Vibes news portal that remedial works will begin while Ikram takes about two to three weeks to issue a full report on the incident.

“Tenaga Nasional Bhd (TNB) will enter the site to remove some cables. DBKL will install some tarpaulin or canvas to protect the exposed areas.

“In the meantime, I am requesting a full survey and inspection of Federal Hill by Ikram due to the frequency of landslides and sinkholes, ageing water and drainage infrastructure, and also due to some development taking place nearby,” Fahmi was quoted saying.