“This matter can be proved without any doubt by having a special Parliamentary sitting, with only one agenda, to table, discuss and decide on the vote of no confidence against him,” they said, referring to Muhyiddin.

The statement further stated that postponing the vote of no-confidence to September did not make sense, with the government’s stability and the lives of the public facing the Covid-19 pandemic hanging in the balance.

“We also request that all civil servants, especially enforcement bodies, continue to act professionally, neutrally, and never follow the political appetite of the current ruling party to suppress or intimidate the Members of Parliament especially in the matter of support for [Muhyiddin],” they added.

On Wednesday, Umno president Datuk Seri Ahmad Zahid Hamidi held a press conference along with 10 other Umno MPs announcing that they had withdrawn support for Muhyiddin and the Perikatan Nasional government.

This indicated that at most, only 104 MPs still supported Muhyiddin, leaving him several members short of the majority he needs to maintain his position.

However, yesterday Muhyiddin announced that the Agong had agreed to his proposal to test his majority in a confidence vote when Parliament reconvenes in September.

All combined, PN theoretically controls 115 out of 220 seats in Parliament. While the Dewan Rakyat officially has 222 constituencies, two remain vacant due to the deaths of their incumbents.

Those who oppose PN ― adding up PH MPs, independent MPs and the dissenting Umno MPs ― could number up to 116. 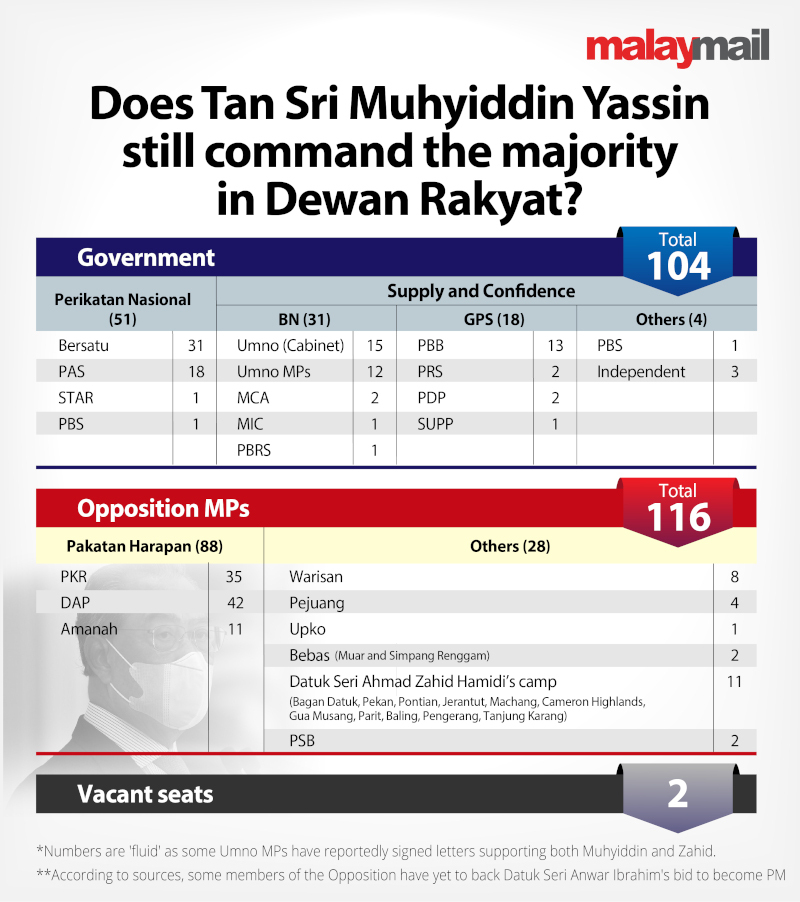