Dewan Negara lawmakers address reporters near the Parliament building in Kuala Lumpur August 3, 2021. ― Picture by Shafwan Zaidon
Follow us on Instagram, subscribe to our Telegram channel and browser alerts for the latest news you need to know.
By IDA LIM AND EMMANUEL SANTA MARIA CHIN

KUALA LUMPUR, Aug 3 ― Dewan Negara lawmakers from the Opposition bench marched to Parliament this morning, demanding the Upper House proceed with its three-day special sitting that was supposed to start today.

The gates to Parliament remained closed today, just like yesterday when the Opposition lawmakers from the Lower House attempted entry for a sitting that was similarly cancelled following an outbreak of Covid-19 cases involving several parliamentary staff.

However, the Opposition senators were not put off by the closed gates and handed a three-page memorandum to Dewan Negara secretary Muhd Sujairi Abdullah earlier this morning.

In the memorandum addressed to Dewan Negara Speaker Tan Sri Rais Yatim, the 16 Opposition senators made their case for why the Upper House must sit.

According to the senators, they have a duty and obligation to meet and debate on the Proclamation of Emergency and the Emergency Ordinances in light of the Yang di-Pertuan Agong’s remarks to the government last week.

They said the Federal Constitution’s Article 150(3) requires both the Proclamation of Emergency and Emergency Ordinances to be laid before and debated in both the Dewan Rakyat and Dewan Negara, before both the proclamation and the ordinances can be annulled or revoked.

“The Dewan Negara should correct the error that happened in the Dewan Rakyat when the Proclamation and Ordinances were revoked by the Cabinet without going through both Dewan,” they said in their letter.

In the Dewan Rakyat, the government had only via the law minister on July 26 announced the decision to revoke the six Emergency Ordinances and that it will not advise the Agong to extend the Emergency that was due to expire on August 1. 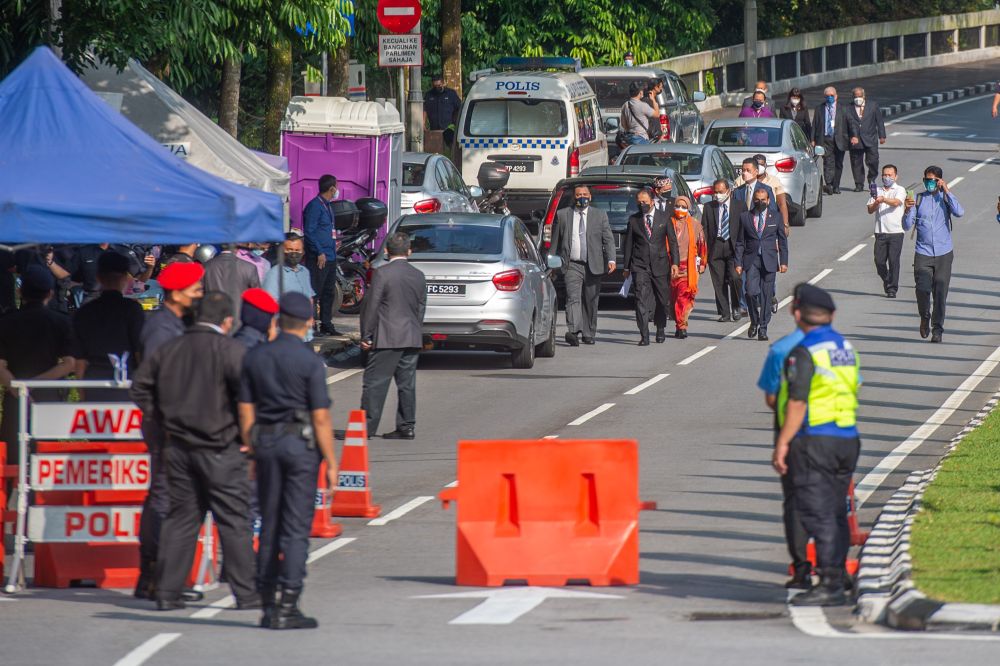 Opposition senators are pictured after marching to the Parliament building to hand a memorandum to Dewan Negara secretary Muhd Sujairi Abdullah on August 3, 2021. ― Picture by Shafwan Zaidon

The 16 senators highlighted the Dewan Negara’s role as the highest legislative body in the country that was established to provide checks and balances on legislative affairs in the Parliament.

“Taking into account the current situation and the disorder that happened in the Dewan Rakyat, it is appropriate for the Dewan Negara to take this chance to correct the situation to uphold the Dewan Negara’s position as the highest legislative Dewan,” they said.

In the same letter, the senators also expressed regret over the short notice given for the abrupt cancellation of the three-day Dewan Negara special sittings that was initially scheduled to be held on August 3 to August 5.

On August 1, the Dewan Negara secretary had informed the Dewan Negara lawmakers that the prime minister had on July 31 decided to postpone the three-day special sittings to a future date to be fixed, due to the Health Ministry’s evaluation of Parliament as a locality with the risk of Covid-19 infections spreading.

The 16 senators said many of them had come to Kuala Lumpur since July 30 in order to carry out the necessary Covid-19 tests ahead of the three-day special sittings.

“We are also told that almost all (99 per cent) of Dewan Negara lawmakers and staff have already received two doses of vaccine. This means that the Parliament area has achieved herd immunity. If there are Covid-19 cases at all, it would not be memudaratkan (harmful),” they said in the letter to Rais, pointing out that all Dewan Negara lawmakers had undergone the Covid-19 tests on July 30.

Pointing out that the Dewan Negara is also composed of lawmakers appointed by the Agong to represent minority communities such as Orang Siam, Orang Asal and the disabled, the 16 senators said it was critical for their interests to be voiced out in Dewan Negara sittings especially in finding solutions for the Covid-19 pandemic.

The Dewan Negara is formed of lawmakers who were selected by their respective state legislative assemblies, as well as those directly appointed by the Agong.

The lawmakers concluded the letter by urging for the Dewan Negara to be able to sit to enable efforts together to find solutions for the Covid-19 crisis and said they were willing to meet Rais to discuss how this could be carried out for the public interest and nation. When speaking to the press after the handing over, which was streamed live across Facebook, Raj Munni implored further with Rais for the sittings to continue, saying the five National Principles, or the Rukun Negara, would be violated without it.

“The basic principles of the Rukun Negara would be violated.

“Parliamentary democracy has been damaged, supremacy of the constitution has been destroyed, and the sovereignty of a constitutional monarch has been betrayed.

“So we are here to defend all these institutions which help form the country,” she said when addressing the horde of media representatives present at the Parliament this morning.