Malaysia Airlines flight MH319 carrying a shipment of the Sinovac vaccine approaches the Kuala Lumpur International Airport (KLIA) in Sepang February 27, 2021. ― Pictures by Yusof Mat Isa
Follow us on Instagram, subscribe to our Telegram channel and browser alerts for the latest news you need to know.

SEPANG, Feb 27 ― Malaysia today took delivery of the Sinovac vaccine, another brand of the Covid-19 vaccine it has procured, almost a week after it received the first batch of the Pfizer-BioNTech vaccine.

The envirotainer ― a temperature-controlled container ― with 200 litres of the vaccine arrived at 9 am at the KL International Airport (KLIA) from Beijing in a Malaysia Airlines Airbus 330-300 aircraft, Flight MH319, bearing the livery of the Jalur Gemilang (national flag).

The passenger-to-cargo flight had left Kuala Lumpur for Beijing at 7.05pm yesterday to pick up the vaccine.

Several ministers were at KLIA when the vaccine arrived.

After the aircraft cargo door was opened, the envirotainer containing the vaccine was unloaded using a jumbo container pallet loader and transferred to a dolly.

The envirotainer is able to maintain the temperature within at between 2 and 8 degrees Celsius.

After the envirotainer had been unloaded, Ouyang handed a white box to Ismail Sabri to symbolise the handing over of the vaccine.

Then, the envirotainer was brought to the i-Secure area for the MASkargo vaccine handling team to check that the container still maintained the stipulated temperature and there were no dents or leakage.

After the inspection, the envirotainer was transferred to a Pharmaniaga truck which left for the designated vaccine storage location under police escort.

The bringing of the vaccine from the Sinovac plant in Beijing was handled by Sinovac and Pharmaniaga Logistics Sdn Bhd under an agreement.

Pharmaniaga announced on Jan 13 that it had signed an agreement with Sinovac to bottle and distribute 14 million doses of the Covid-19 vaccine.

Khairy had said that the National Pharmaceutical Regulatory Agency (NPRA) is in the process of evaluating the Sinovac clinical data. The Sinovac vaccine has passed the third stage of clinical trials in several countries, including Brazil, Turkey and Indonesia.

On February 21, Malaysia received its first batch of 312,390 doses of the Pfizer-BioNTech vaccine.

The programme will be carried out in three phases, with the first phase,  from February to April, for frontline personnel.

The second phase is scheduled from April to August for senior citizens aged 60 and above and vulnerable groups with morbidity issues, as well as persons with disabilities, while the third phase is from May 2021 to February 2022 for those aged 18 and above. ― Bernama 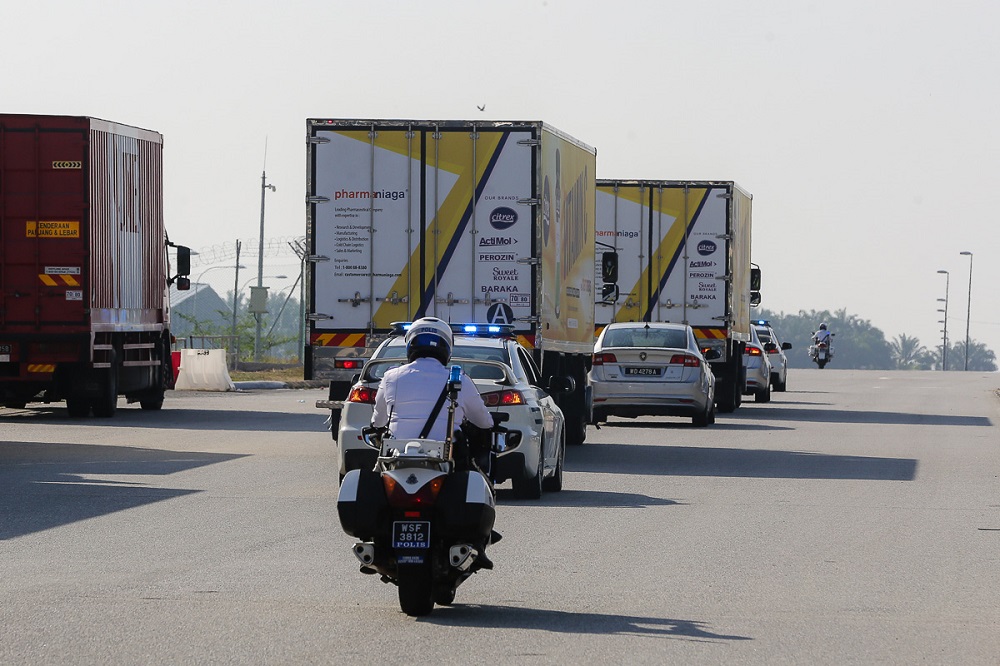 A convoy of vehicles carry the Sinovac Covid-19 vaccine with police escort from Cargo Village in KLIA February 27, 2021.