Day One of Klang Valley MCO 2.0 sees commuters happy with lighter traffic, but some sceptical if Covid cases will drop

Amalina Osman speaks to Malay Mail during an interview at KL Sentral in Kuala Lumpur January 13, 2021. ― Picture by Yusof Mat Isa
Follow us on Instagram, subscribe to our Telegram channel and browser alerts for the latest news you need to know.
By R. LOHESWAR AND KEERTAN AYAMANY

The transport hub which houses the capital’s train and metro lines was empty of the usual crowds rushing about and that gave the office worker much relief, especially with the latest surge in Covid-19 cases.

“I think this MCO 2.0 is a good move so we can control the pandemic. I mean, you know how people's attitude is.

“We open up many economic sectors but they don’t follow the SOPs. By doing this MCO again in a way it’s like a reminder to the public, or shall I say it makes them more aware of the grave situation we are currently in,” she told Malay Mail when approached.

Amalina who works in an insurance agency in the area said her company is adopting the timeshare approach so she and her colleagues take turns to come into office to limit the people capacity in the building.

She said her train was around six minutes late, but the lack of passengers in the train was a welcome sight. 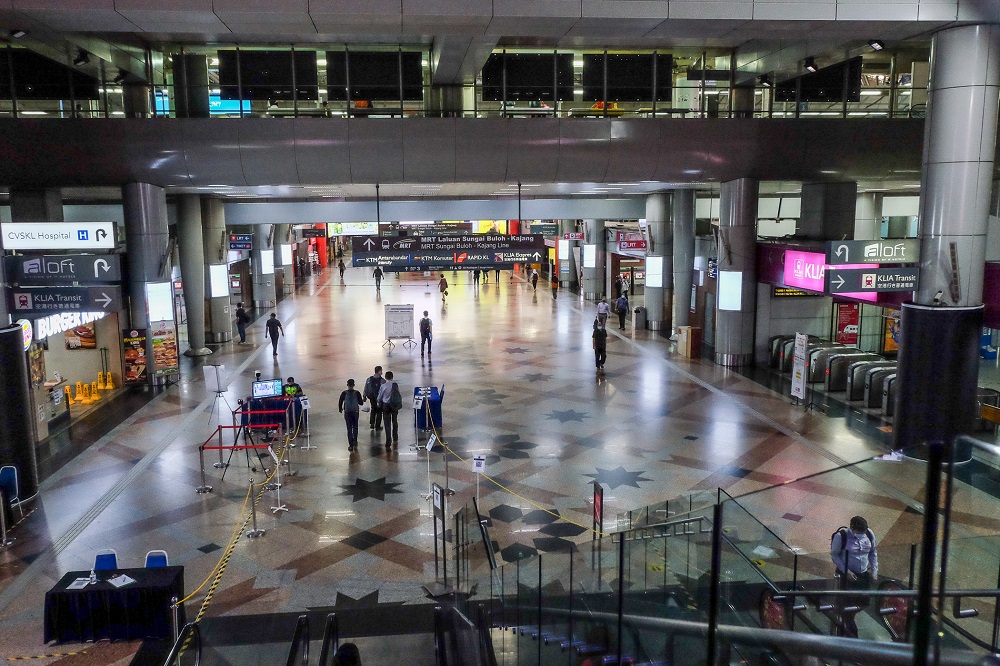 A general view of KL Sentral on Day 1 of the movement control order (MCO) in Kuala Lumpur January 13, 2021. ― Picture by Yusof Mat Isa

On Day One of the second round of the movement control order (MCO) in the Klang Valley, traffic on the roads was fairly light during the “morning rush”. The same was true of public transport too.

Usually it provides services for 200,000 commuters daily and 60 million annually. Today there were hardly anyone alighting from the LRT trains while the KTM Komuter trains ― which picks people from surrounding suburban areas ― had only a handful of people alighting from them.

Another commuter Sufrizan Dawing, 28, said he loved the empty train and train station.

“This is the best,” said Sufrizan. “I commute everyday from Cheras to here and to see this place so clean and quiet and spacious is lovely. In my opinion I feel even with this second MCO things are still more or less the same on the streets, just a few adjustments here and there like no dine-in and so on.

“I think since today is only the first day let’s see how compliance is in the coming week.”

According to the staff manning the ticket booths at KL Sentral, there was no change to the train timetable. As to whether or not there will be fewer trains in the coming days, it is yet to be known.

Outdoor activities like running and exercising will be allowed in states where a two-week movement MCO will be enforced starting today.

However, only members from the same household will be allowed to do so, he stressed.

Norzainah Zulkifli was jogging with her sister Fadilah around the Bukit Jalil stadium this morning, deviating from her preferred path in the Bukit Jalil Recreation Park, which was closed today.

The avid exerciser who works at the Universiti Kebangsaan Malaysia Hospital was relieved that the government had brought back the MCO, but felt some people may not take it seriously enough and be lax in complying with Covid SOPs as they had become accustomed to it.

“In the previous MCO everyone was staying indoors, you weren’t allowed to go out at all unlike now where we can still exercise outdoors,” said Norzainah.

“However there are way fewer people here compared to last week or even a few days ago. The tai chi groups, jogging groups are all missing. I think it’s good to have people at home although I feel two weeks is not enough.

“Now since we are reopening certain sectors people tend to go out still so I hope we can get things under control.” 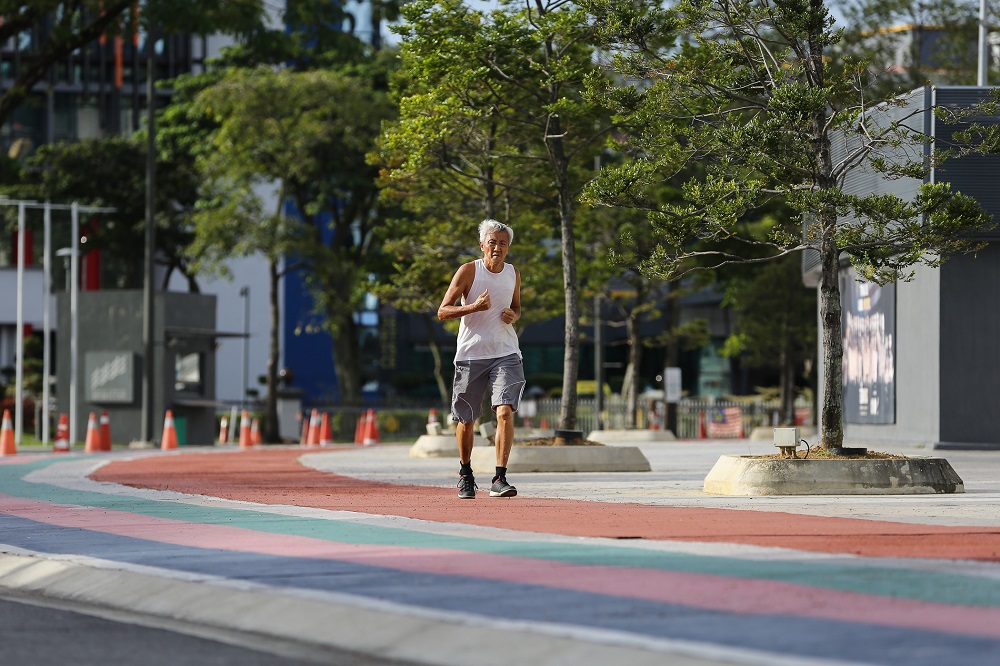 Another jogger in the area, Chew Thiam Ho said there are too many grey areas in the government's announcements regarding the restrictions.

“Right now I feel things are still the same as before, not so strict like the earlier MCO. If possible it would be nice to follow Singapore’s method where they give senior citizens a wristband and they monitor where they go instead of us having to sign in with our phone or write down our names at every place we visit,” the retired advertising executive told Malay Mail.

All the food stalls were closed and one staff working at a Chinese medicine shop called Yong Fong Thai seemed frustrated and agitated when asked how the situation was and if they felt the MCO was worthwhile.

“I don’t know how it goes. Everywhere here now closed so just wait and see. I got no business for weeks,” said the unnamed man.

While taking photos, a biker stopped in front of us and asked us if the area was going to reopen. The rider seemed lost as to when or if Chow Kit was going to reopen and before leaving said he was looking to buy spare parts for his aquarium.

Around the Kuala Lumpur City Centre (KLCC) areas, popular eateries like NZ Curry House were desolate, with mostly only construction workers seen walking around the area.

The KLCC park itself was closed, so people have resorted to jogging along the surrounding causeway. Justin Kijam, 38, who works in an office-bound job in oil and gas said he went to visit his family in Negri Sembilan last week, when he heard about the MCO speculations.

He came back to KL earlier this week to prepare for the MCO.

“Not really [worried about the MCO], because we've already learnt what to expect from the first time. So I didn't think this time would be a lot different.

“The announcement of the state of Emergency doesn't really worry me either. We understand that it is for stability.

“I understand that it's not the same as a wartime emergency, so it doesn't really affect the average person's day-to-day,” said Justin. 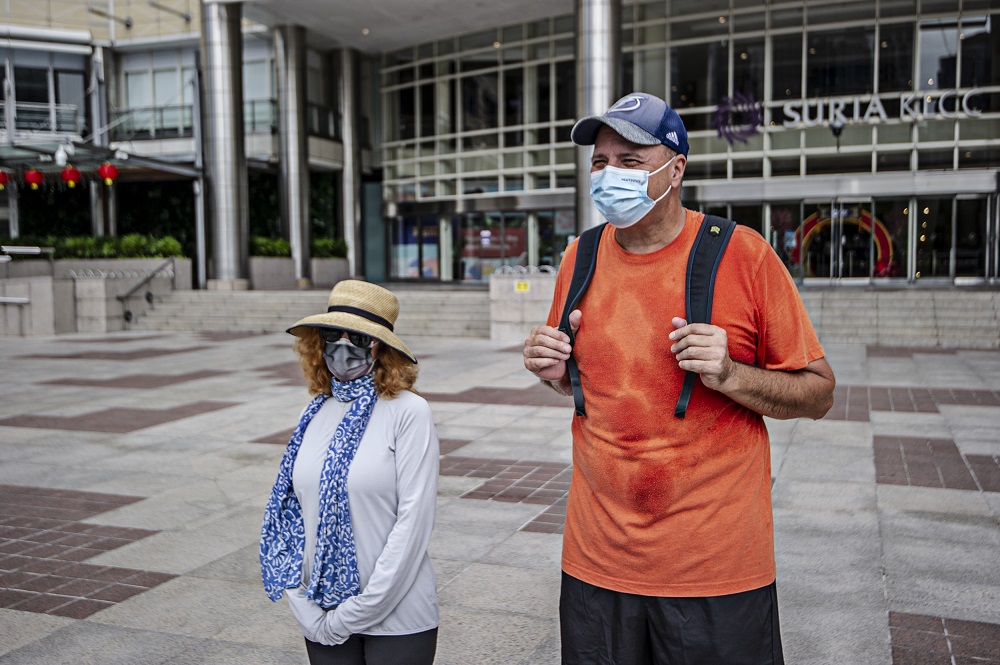 Expat Keith R. and his wife Cheryl speak to Malay Mail during an interview session in Kuala Lumpur January 13, 2021. ― Picture by Shafwan Zaidon

Meanwhile, 62-year-old Keith R. who is an expat under the My Malaysia Second Home programme, said he has been in Malaysia since March 2.

He and his wife Cheryl were met while jogging near the KLCC park and they said the first MCO was scarier than the current one.

During the first MCO they were both stuck in a hotel for three months, after which they were able to find a place to stay nearby to KLCC.

“The first MCO scared the hell out of us because we didn't know how we were going to eat if we couldn't leave the hotel.

“But that went okay, and we kind of got used to it, so now it's not as scary,” said Keith.

“The Emergency announcement was a bit disconcerting for sure but after they explained it I felt  better about it.”

MCO 2.0 is set to run till January 26. The disease caused by the coronavirus Sars-CoV-2, Covid-19, was starting to overwhelm the country’s major public hospitals, 15 of which he said were already “at breaking point.”

Selangor, Penang, Melaka, Johor, Sabah and all three Federal Territories will be placed under the MCO while six states will remain under the conditional movement control order (CMCO).