Health Director-General Tan Sri Dr Noor Hisham Abdullah said of the 660 cases, only two cases were imported from India and Nepal respectively. — Picture by Choo Choy May
Follow us on Instagram, subscribe to our Telegram channel and browser alerts for the latest news you need to know.
By ASHMAN ADAM

KUALA LUMPUR, Oct 13 — The Ministry of Health recorded four Covid-19 deaths today, as new cases shoot back up to 660.

But the country also recorded the highest daily recovery rate at 350 cases, bringing the total number of active cases to 5,345.

He said from the 658 local cases, 618 involved locals while 40 cases involved foreigners.

Selangor has the second highest number of cases today at 76, with 45 coming from already existing clusters, 16 from close contact tracing, nine from returnees from Sabah, five from Covid-19 symptom screenings and one from the new Bah Kenangan cluster.

Kedah registered 60 new cases, all from the Tembok cluster, while Penang recorded 23 new cases, with 18 coming from the Penjara Reman cluster, three from the new Penjara Jawi cluster and two from Covid-19 screenings.

Perak registered 16 new cases, all from the Tembok cluster, while Johor registered 10 new cases, five from close contact tracing, four from already existing clusters and one returnee from Sabah.

Kuala Lumpur recorded nine new cases, where six were returnees from Sabah, two from already existing clusters and one from close contact tracing.

As of today, the number of cases being treated in the Intensive Care Unit (ICU) has gone up to 101, with 32 needing to be intubated.

Dr Noor Hisham added that four more deaths have been confirmed today. The first deceased was identified as an 84-year-old Malaysian female who had a history of high blood pressure and dyslipidemia. The second deceased has been identified as an 83-year-old man with a history of high blood pressure, diabetes and dyslipidemia. Both first and second deceased passed away at the Duchess of Kent Hospital, Sabah.

The third deceased is a 36-year-old woman with a history of tuberculosis. She passed at the Semporna Hospital. The fourth deceased was identified to be a 59-year-old man with a chronic kidney disease who passed away at Tawau Hospital. 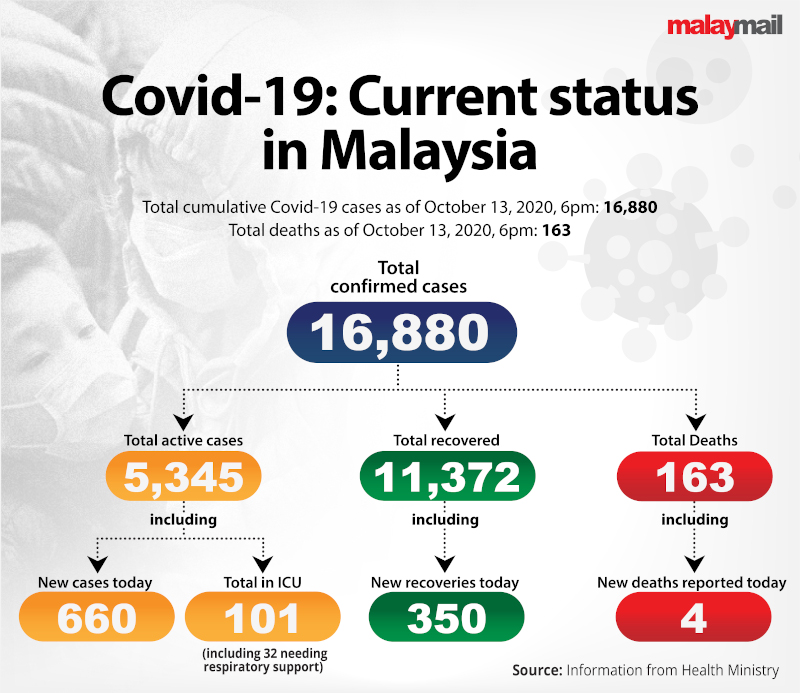