KUALA LUMPUR, Oct 4 — The Health Ministry today recorded 293 new Covid-19 cases spread out over nine states and the federal territories of Kuala Lumpur and Labuan, with no additional deaths recorded.

Malaysia had been charting a continuous streak of new highs in terms of daily new Covid-19 cases over the past three days, with 260 recorded on October 1, followed by 287 (October 2), and the nation’s current record high at 317 cases (October 3 or yesterday).

Health Director-General Tan Sri Dr Noor Hisham Abdullah today said that the 293 cases composed of 292 locally-transmitted cases (involving 269 Malaysians and 23 foreigners), while the remaining case is an imported case involving a foreigner who arrived from Bangladesh and was detected in a sign-on screening in Kuala Lumpur.

The bulk or about 81 per cent of the 293 cases today were detected in Sabah (126 cases) and Kedah (113 cases), while the rest were recorded in Selangor (31), Johor (eight), Labuan (five), Kuala Lumpur (three), Perak (two), Negri Sembilan (two), and one case each in Penang, Kelantan and Sarawak.

This brings the cumulative total of Covid-19 cases recorded in the country to 12,381 to date, but with 83.05 per cent or 10,283 having recovered and discharged so far.

With 67 individuals discharged today, the current total for active cases or Covid-19 patients still under treatment is 1,961.

Of the 1,961 cases still being treated, 28 are in the intensive care units (ICU) with four of them intubated or on respiratory support.

Breakdown of the 292 local cases today

For the other cases today that were detected outside of Sabah, 30 of them involved those who had returned from visiting Sabah, which means that since September 20, there has been a cumulative total of 206 Covid-19 cases with a history of travel to Sabah. The Health Ministry dubbed Sabah a “high-risk area.”

Selangor’s 31 cases today all involved Malaysians, 13 were screened upon return from Sabah, 13 are new additions to Kluster Jalan Meru, while three are part of newly-announced cluster Kluster Embun, and two are from close contact screenings.

For Johor’s eight cases today, six are Malaysians who were screened upon their return from Sabah, one from a foreigner who was screened before return to the country of origin, and one job screening for a foreigner.

Kuala Lumpur’s two cases involve a Malaysian from the Kluster Jalan Meru and another Malaysian who had returned from Sabah, while Sarawak was a Malaysian detected through sign-on screening and Penang involved a Malaysian who is a close contact to Covid-19 patient number 11,133.

The rest of the cases today all involved Malaysians who had returned from Sabah, with such cases detected in Labuan (five), Negri Sembilan (two), Perak (two), and Kelantan (one).

Dr Noor Hisham also noted that senior minister Datuk Seri Ismail Sabri Yaakob had earlier today announced a 14-day targeted enhanced movement control order (Temco) at the Alor Setar prison and the prison staff’s quarters in Kedah from October 6 due to the spike in cases there, before adding that this would enable the targeted detection of cases and the curbing of the spread of Covid-19 infections. 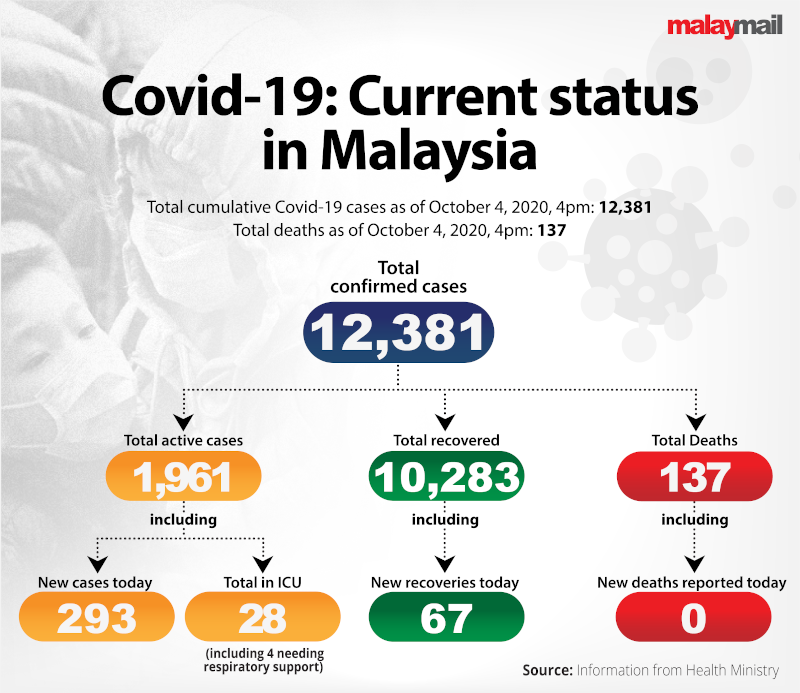