He shared the information on his Facebook page, where he wrote that the number of active cases now stands at 858. Of today’s 111 cases, 107 were local infections while the rest were imported cases involving four non-Malaysians.

Of the 107 locally-transmitted cases, 76 were Malaysians while the rest were foreigners.

“There are four cases in the internal care unit with three of them needing the aid of ventilators.

“As of 12pm today, two of the import cases are in Kuala Lumpur after the individuals returned from India and Indonesia. They were both admitted to Hospital Sungai Buloh for observation,” Dr Noor Hisham said in a statement.

“Another case was reported in Selangor involving an illegal immigrant from Indonesia as well, who was caught by authorities and sent to the same hospital. The last import case involved an individual returning from Singapore and the case was reported in Johor,” he added.

As for the 107 local cases, one case apiece was found in Selangor and Pahang after the individuals returned from Semporna and Kota Kinabalu in Sabah.

Kedah had eight new cases while the bulk of Covid-19-positive cases came from Sabah at 97.

Of the 97, 64 were locals and 33 were foreigners. From that total, 13 came from close contact detection at the Benteng cluster, two cases from the Laut cluster, 74 cases from Bangau-Bangau, two symptomatic cases and one was a severe acute respiratory infection (SARI) patient.

Two more cases from Sabah were from workplace screening while another case was detected at one of the international terminal entry points into the country. The final two cases were discovered after the individuals visited the hospital for testing.

In Kedah, seven cases came from the Sungai cluster involving six Malaysians and one foreigner. The remaining case was a Malaysian SARI patient currently in Hospital Bahiyah.

With no deaths today, the death toll stays at 133. 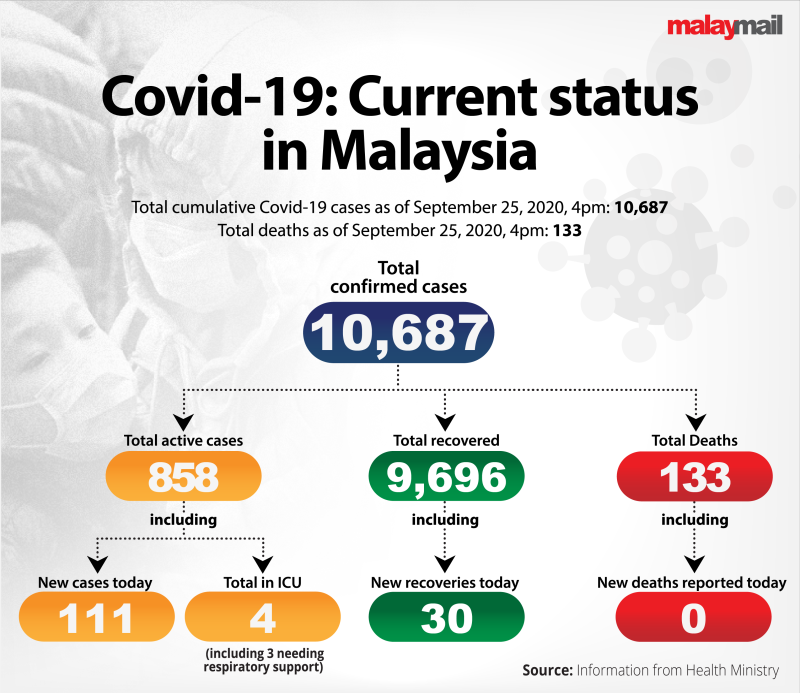