Health director-general Datuk Dr Noor Hisham Abdullah speaks during an interview with Bernama in Putrajaya May 30, 2020. — Bernama pic
Follow us on Instagram, subscribe to our Telegram channel and browser alerts for the latest news you need to know.

PUTRAJAYA, May 30 —  Malaysia is in the final phase of recovery following implementation of the movement control order (MCO), enforced since March 18, which has successfully reduced the number of new Covid-19 cases.

Health director-general Datuk Dr Noor Hisham Abdullah said now, with the implementation of the Conditional movement control order (CMCO) since May 4, it had also reduced the infectivity rate or R-Naught (RO) to 0.3, compared with 0.6 during the MCO period.

“It means that an infected person can only infect 0.3 people, so it is decreasing and to look into future cases, the model is working well. Right now, we are in the final stages of recovery, “he said during an exclusive interview with Bernama here.

R0 is a mathematical term that indicates how contagious an infectious disease is. It’s also referred to as the reproduction number. As an infection is transmitted to new people, it reproduces itself. it tells the average number of people who will contract a contagious disease from one person with that disease, whereby reducing the RO value to less than 1 continuously will help to end the outbreak of the disease.

Dr Noor Hisham said the Health Ministry (MOH) would continue to monitor the situation in the country throughout the CMCO period which is enforced June 9.

“If the number of new cases can be maintained at a one digit number for more than a week then it is likely that 100 per cent of the economic sector can be opened, as well as the social and educational sectors,” he added.

He said based on data obtained from May 4 to 29, which was almost a month of the CMCO period, after the CPPB came into force, it showed that there were only about 200 cases involving Malaysians out of the 1,800 new Covid-19 cases reported in the country.

“This means that the CMCO is a success, even with the MCO, we also managed to flatten the curve. The people’s compliance with the SOP. The success is possible not only by what was done by the Health Ministry and the government, but together with the people because Malaysians adhere to the SOP,” he added.

Dr Noor Hisham said that besides facing a sudden increase in cases involving illegal immigrants at the Immigration Detention Depots, the Health Ministry also anticipated an increase with the interstate travel during the Aidilfitri celebration.

However, he said, a surge in the number of cases would not happen and the situation would be under control if the people continue to comply with the SOP set by the government.

“… Maybe, there will be an increase in cases but not drastic increase. So, if the people follow the SOP we might not get the third wave, we are waiting, the raya is over, maybe in a week, two weeks we will see new cases every day.

“If the number of case is maintained at two digits or one figure, the CMCO period will end on June 9. We’ll see how things go,” he said.

No death due to Covid-19 was reported in Malaysia for the past seven days until yesterday.

The cumulative number of Covid-19 fatalities in the country remained at 115 cases or 1.49 per cent of the total number of Covid positive cases in Malaysia, which was 7,732, as of yesterday. — Bernama 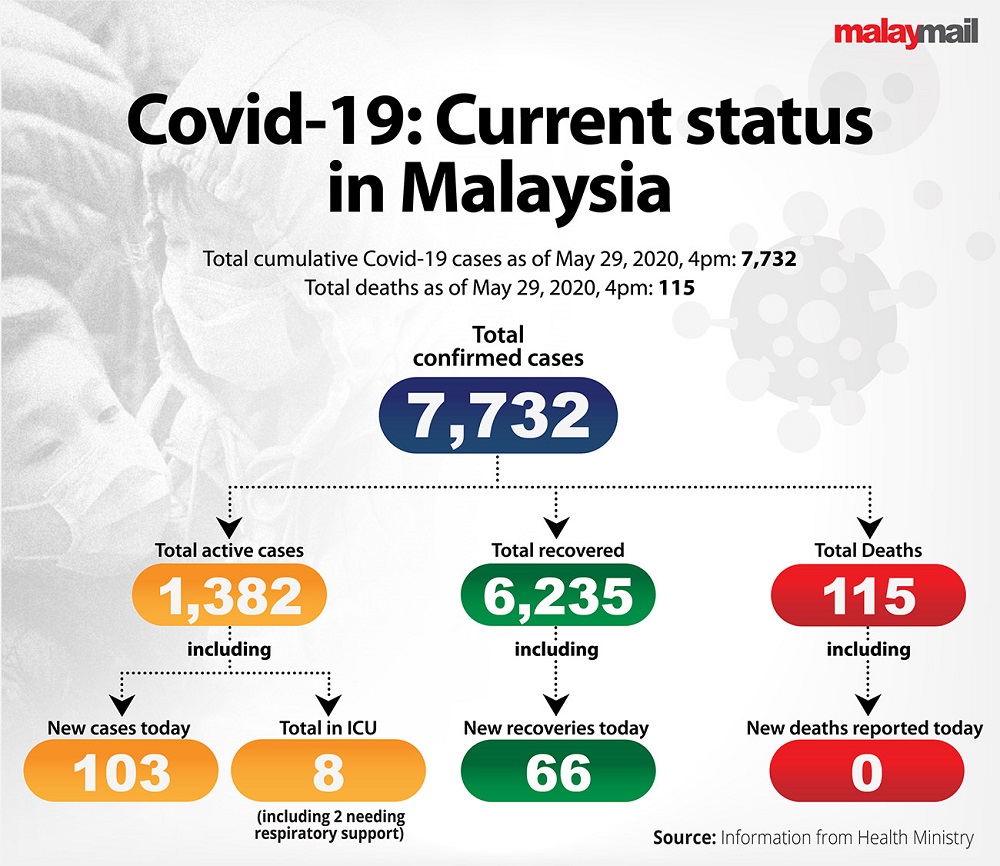