Demonstrators take part in Women's March Malaysia 2020, in conjunction with International Women's Day in Kuala Lumpur March 8, 2020. ― Picture by Miera Zulyana
Follow us on Instagram, subscribe to our Telegram channel and browser alerts for the latest news you need to know.
By IDA LIM

KUALA LUMPUR, March 8 — Malaysians who gathered today in the nation’s capital in conjunction with International Women’s Day listed seven key demands, with one of the most prominent messages being the call for a ban to child marriages which are currently supported in seven states in the country.

The multiracial group of men and women, who appeared to be predominantly youths, marched peacefully this morning from in front of Sogo complex to a small triangular patch of grass near the junction of Jalan Raja and Jalan Tun Perak.

While seven demands were listed out, the issue of underage marriages appeared to be one that resonated strongly with the crowd.

Child activist Hartini Zainudin spoke about the years and years of struggle on the issue of child marriages, calling for immediate action to end marriages involving children to enable them to study instead.

She listed the seven states that were still supportive of child marriages, namely Sarawak, Kelantan, Terengganu, Kedah, Pahang, Negri Sembilan, and Perlis, urging those who attended today to call for a instant ban of such marriages in those states instead of adopting five-year plans.

“No five-year plans. Ban child marriage now,” she said in a speech shortly before noon to an estimated crowd of 300 to 400 participants.

On January 16 this year, then deputy prime minister Datuk Seri Dr Wan Azizah Wan Ismail had launched the National Strategy Plan in Handling the Causes of Child Marriage, which outlined short, medium and long-term programmes and actions to be implemented over a period of five years from 2020 to 2025 to tackle the six main factors identified as causing child marriage. 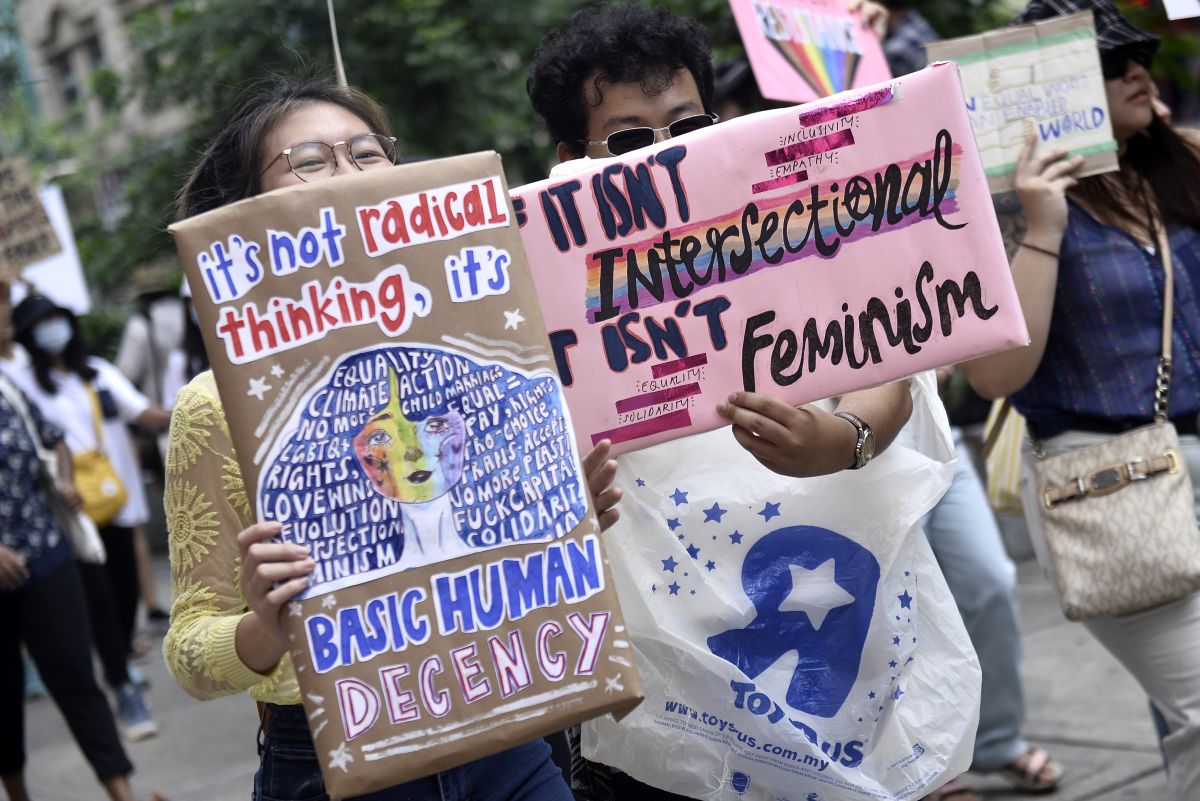 Another female activist who spoke delivered a rousing speech against child marriages, pointing out the incongruity of allowing children to be wed when even young adults such as her in their earlier 20s lack knowledge on matters such as responsibilities of being a spouse, tax matters or even buying property.

Many among the crowd or at least 50 had identified themselves by a show of hands as being first-time participants of the annual Women’s Day march, with most of these being youths.

When asked by this 23-year-old activist on how many knew someone who had married as a child below the age of 18, a startling number of around 30 to 50 of the youths present raised their hands — indicating how common the problem was. Many of these had also shot their hands up to show that they were first-timers at the rally.

She urged those present to write to their MPs in the seven states that have refused to ban child marriages, pointing out that children deserve protection and that children are the country’s future.

“We are the youth, why are we letting all these old men tell us it’s ok to be married at 10?” she asked during her speech at around 12.30pm.

Last November, then deputy prime minister and women, family and community development minister Datuk Seri Dr Wan Azizah Wan Ismail said in Parliament that only Selangor has amended its state laws on the minimum age for child marriage, with the Federal Territories in the process of making such amendments and with only the five states of Penang, Sabah, Johor, Melaka and Perak named as having agreed to amend their laws to stop child marriages.

Hartini and the 23-year-old activist were among about 13 speakers and two poets who spoke during the rally, including an Orang Asli woman from Kelantan speaking out for the rights of the indigenous community seeking to protect the forest and their land rights, as well as a woman from Ipoh who spoke about union rights.

Letters from a 14-year-old girl against child marriage and a representative of the Rohingya refugee community in Malaysia were also read out by the organisers, as those present wanted to voice out for those who are not allowed to attend rallies under the law. 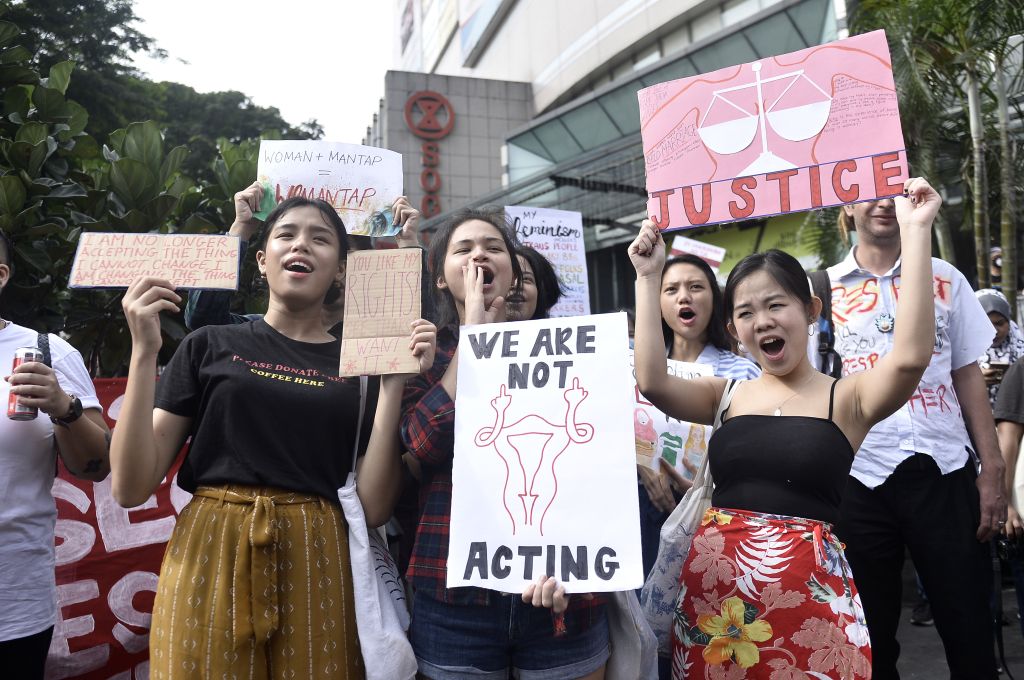 A wide range of handmade placards, signs and posters were seen during the rally today, with varied themes including messages against rape, child marriages, gender inequality and climate change.

The messages included “End rape culture”,  ”End violence against women”, “Rape is the rapist’s fault”, “The way we dress doesn’t mean yes”, “End victim blaming”, “Police your behaviour. Not our bodies” and “Marriage is not a transaction for your sexual pleasure”.

In line with climate change being an official demand of this year’s rally, signs were spotted stating “Save Kuala Langat North Forest Reserve, Feminists demand climate justice - Act now”, “Destroy the patriarchy not the planet”, “Who will kill me first? Patriarchy or climate change”.

Other signs spotted read: “It’s 2020 and I can’t believe we still have to protest for equality”, “Men of quality don’t fear equality”, “Women empowerment is not a threat”, “Equal pay for work of equal value”, “A woman’s place is in the Parliament”. 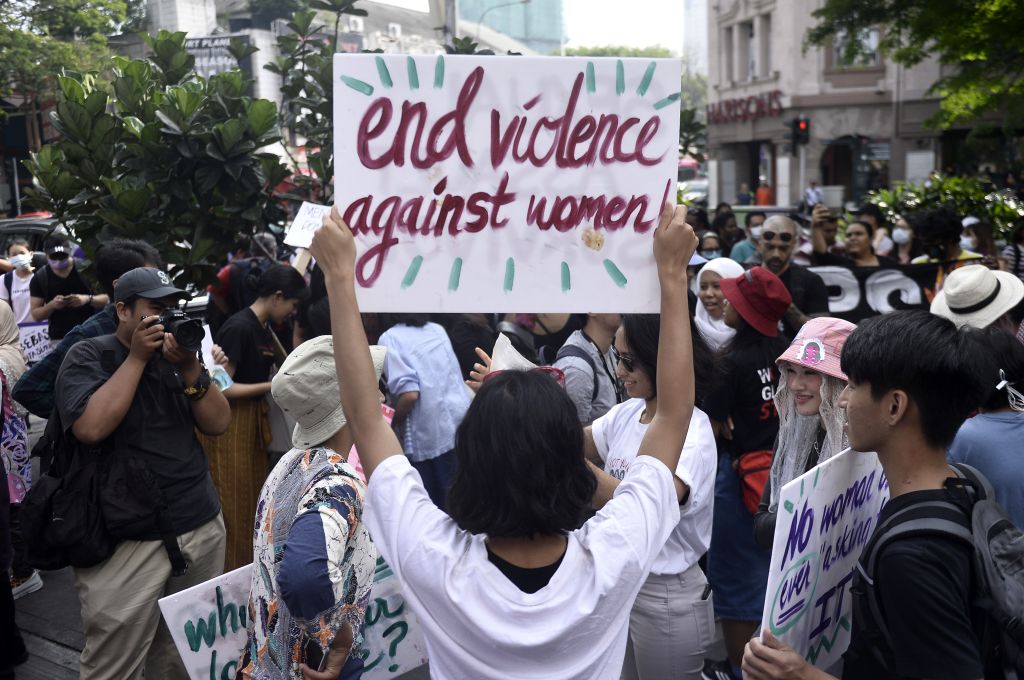 The seven demands this year include calling for an end of all violence based on gender & sexual orientation; the ban of all child marriages; ensuring the right and freedom to make choices over their own bodies and lives; equal pay for work of equal value.

The other demands are for the enactment of a Gender Equality Act; equal public and political participation; as well as a call for a declaration of “climate crisis” and the formulation of a national plan to mitigate climate crisis. 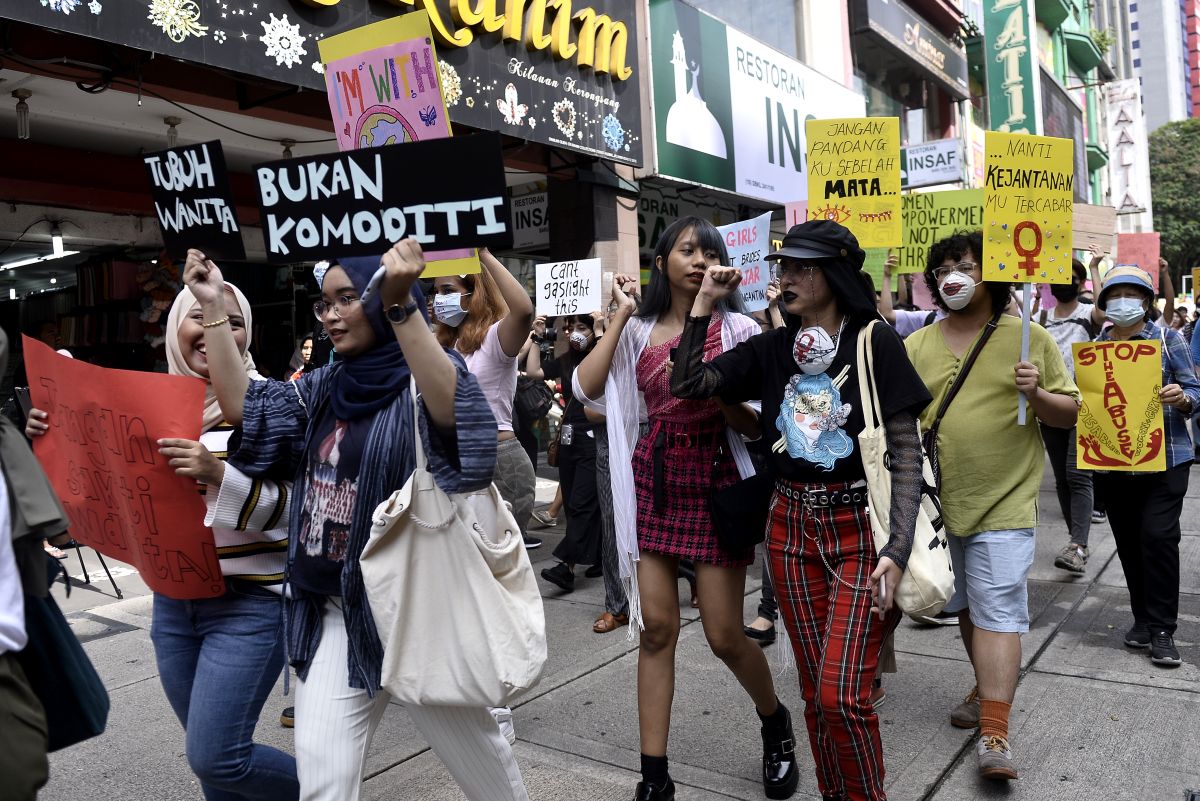 Gathering in front of the Sogo shopping complex along Jalan Tuanku Abdul Rahman at 10am and listening to speeches, the participants of the rally marched in rows in an orderly fashion along the pavement from 10.40am until 11.10am where they reached the patch of grass near the Dataran Merdeka area which was closed off for a half marathon event.

Having chanted and sang slogans as they made their way to the patch of grass that also served as a road divider in between the Sultan Abdul Samad building and the countdown clock installation, the crowd sat down to hear more speeches before dispersing shortly before 1pm.

Police personnel were seen escorting the rally participants and keeping an eye on proceedings, while also ensuring they stayed away from the road and on the pavement while traffic continued uninterrupted along the road.

The rally ended without any incidents, with one of the organisers seen picking up any rubbish and with participants also asked not to leave any rubbish behind.

Malay Mail understands that a total of 12 representatives from the Human Rights Commission of Malaysia (Suhakam) were present as observers, while four lawyers were present onsite to observe with two others also on standby to provide legal assistance if required.