KUALA LUMPUR, Oct 12 — Pakatan Harapan (PH) tabled what was seemingly a political Budget that targeted most if not all key constituents yesterday, channelling funds under a people-pleaser spending plan aimed at creating jobs, increase buying power and welfare assistance.

Budget 2020 saw some of the most economically vulnerable groups such as low-income Bumiputera given priority, but with focus given on long-term goals aimed at elevating living standards in line with the Shared Prosperity Vision 2030 for inclusive growth.

Under the RM297 billion Budget, PH sought to tackle some of the longstanding economic issues that fuelled public anger towards its predecessor, Barisan Nasional. 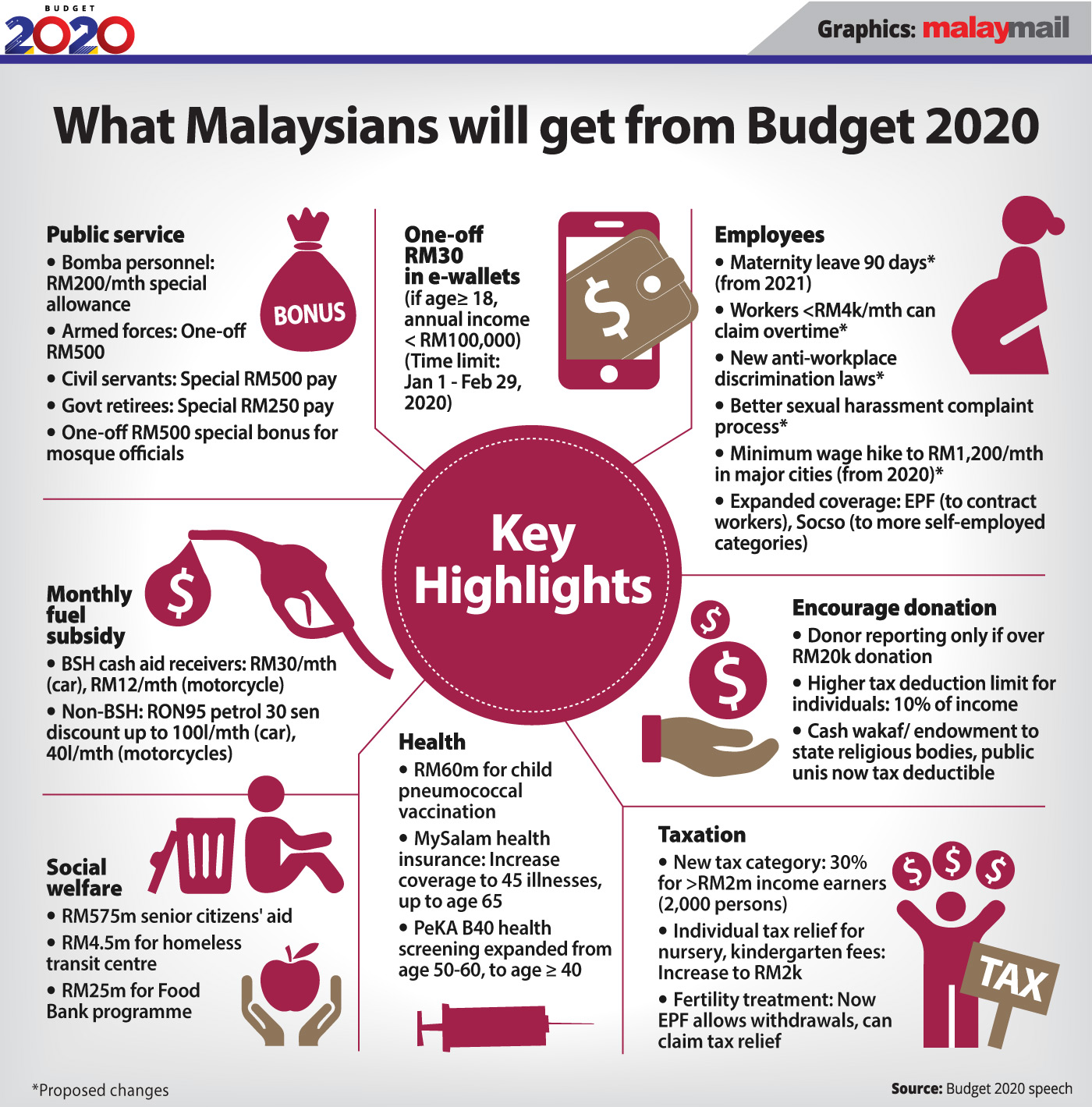 Billions were poured into spurring key industries like opening up financing access for small and medium enterprises, the country’s largest employers by sector, while youth employment received unprecedented attention both in the form of aids and skills development.

The attention given to education encapsulates PH’s long-term goal of turning the country into another South Korea, in which industry and innovation will be at the core of its transition towards high-income status.

Finance Minister Lim Guan Eng when tabling the coalition’s second Budget said it would direct RM5.9 billion into Technical Education and Vocational Training Programme (TVET), in a bid to strengthen synergy between public and private sectors.

The PH administration believes TVET holds the key to the graduate unemployment conundrum, and would help create jobs, especially in the high-tech manufacturing sector where such skills are said to be lacking.

“In addition, the Employees Provident Fund will receive an allocation of RM20 million, matched by a RM20 million allocation from the Human Resources Dividend Fund to encourage working adults to take professional certification exams in Industry 4.0 related courses,” Lim said.

Graduate unemployment has been three times higher than the national unemployment rate in the last five years, at over 100,000 average. Bank Negara Malaysia, in a note published on the issue last year, said a mismatch in skills is among the chief causes. 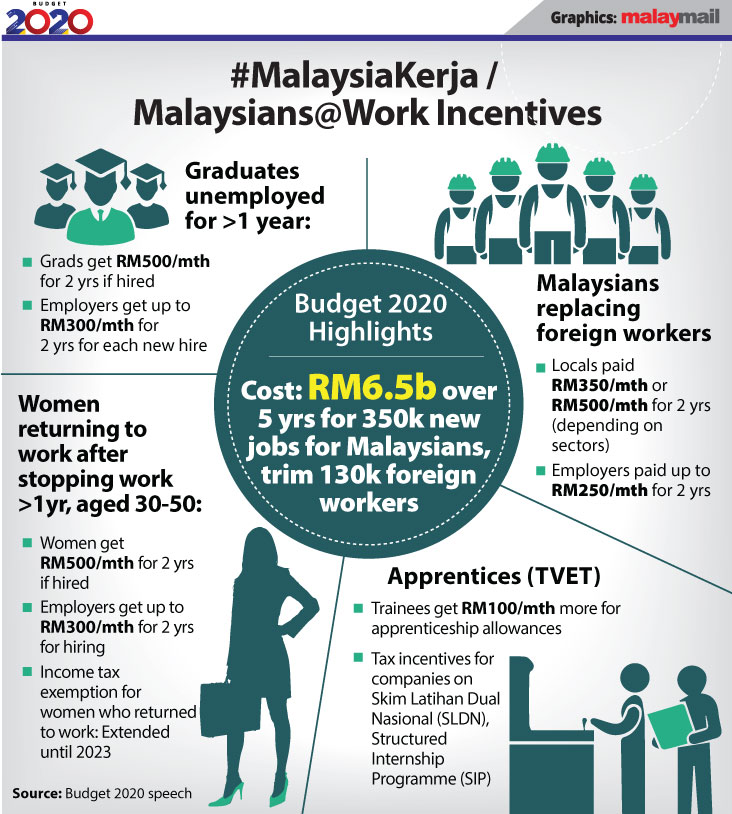 Youth and Sports Minister Syed Saddiq Syed Abdul Rahman had said that TVET skills will be crucial to prepare the younger workforce for “Industry 4.0”. Next year’s TVET allocation is RM400 million more than 2019.

On Twitter shortly after Lim announced the initiative, the 25-year-old Muar MP noted that the ruling coalition will be spending over RM60 billion to help youths get jobs. He declared Budget 2020 was clearly a “youth Budget”, and that it reflected PH’s commitment to assist them.

Youths will form the largest share of voters come the next general election after PH lowered the voting age to 18 earlier this year.

The ruling coalition also showed urgency in catching up with digitisation. Under Budget 2020, close to RM25 billion will be poured into beefing up internet infrastructures.

This, Lim said, reflects PH’s vision for Malaysia in the digital market, where there is opportunity for more entrepreneurship and ultimately, jobs.

Much of it will go into implementing the National Fiberisation & Connectivity Plan (NFCP), a public-private partnership the government estimates will bring in total investment of RM21.6 billion in over five years.

Under the digitisation policy, RM50 million will be allocated to pilot a 5G ecosystem to help Malaysian companies ride the global 5G wave, and RM25 million to spur more high-tech projects on digital applications like drone delivery and autonomous vehicle, all requiring fast internet.

PH believes its investment into high-speed internet connectivity will make the rural economy more vibrant and bring more jobs and business opportunities to some of the country’s poorest constituents, who are Budget 2020’s key recipients.

This comes on top of increased spending on assistance and the rolling out of policies meant to affect them directly.

For next year, allocation for subsidies and social aid will be up by more than RM1 billion to RM24.2 billion, while the ruling coalition also announced incentives and fresh remuneration for its 1.6 million strong civil service in what is seemingly an attempt to woo their minds and hearts.

This attempt at political enticement is also extended to Sabah and Sarawak, two states that hold over a third of Parliamentary seats.

Sarawak PH chief Chong Chieng Jen said allocation for the state under the federal Budget 2020 is the largest ever compared to previous years’ allocations, a total of RM4.5 billion or 14.8 per cent of the RM30 billion in development expenditure for the states.

All this will be done despite a drop in projected revenue and a much smaller budget. 2019’s expenditure was RM316 billion while revenue stood at RM263.3 billion, compared to next year’s RM297 billion and RM244.5 billion in expenditure and revenue respectively.

In a press conference after the Budget was tabled, Prime Minister Tun Dr Mahathir Mohamad said it was certain to make “almost everyone happy”.

He told a press conference after the tabling of the Budget in Parliament that this is also a reflection that the PH administration is a capable government in light of the extra funding being granted across the board.

“The rakyat... many people are happy. Almost everybody got something,” said Dr Mahathir when asked if next year’s Budget can change Putrajaya’s decreasing popularity among the public.