The Subang Hindu temple: Its ‘history’ and legal dramas

A general view of the Sri Maha Mariamman Devasthanam temple in USJ 25, Putra Heights. 2018 — Picture by Firdaus Latif
Follow us on Instagram, subscribe to our Telegram channel and browser alerts for the latest news you need to know.
By By Ida Lim

KUALA LUMPUR, Nov 29 — The Sri Maha Mariamman Devasthanam temple in Seafield, USJ25, Subang Jaya came into the spotlight this week as its compound became the scene of rioting, but what do we really know of its history?

Official information is lacking about this Hindu temple at the heart of a dispute that was supposed to have been resolved four years ago, but here is what we found out based on information from previous news reports and legal documents.

So how old is the temple?

It is hard to verify details about the temple, as there are actually two “factions” within with sometimes conflicting information: one group that is willing to relocate the temple in accordance with a 2014 court order to vacate the land owned by a private company, and another group that is refusing to move due to a need to defend its heritage.

But Chellappa Kalimuthu, who was recognised by the courts as the head of the Sri Maha Mariamman Hicom temple committee which is willing to relocate the temple, said the temple was only built in 1974 with funds provided by an MCA politician — which would make it 44 years old this year.

“Actually it’s not 147 years old, this temple was built in 1974,” he told Malay Mail, adding that both the Seafield temple and a look-alike temple in Batu 8, Jalan Bukit Kemuning were “built by the same sculptor” — a Malaysian named Perumal.

V. Ganabatirau, the state assemblyman for Kota Kemuning where the Seafield temple is located, had also previously said the temple was built in 1974.

MIC president Tan Sri SA Vigneswaran, in an open letter published earlier this month, quoted a 1993 court judgment that said the temple has been there since 1891, or 127 years ago.

When asked about the temple, Hindu Sangam president Datuk R.S. Mohan said there was a lack of proper details on the temple’s history, but believed it could be possibly over 100 years old as plantation workers who arrived from India as far back as a century ago built temples in the estates they worked in.

According to Mohan, the Sri Maha Mariamman Devasthanam temple hosts the Amman (mother) or a goddess respected and worshipped by Hindus as a powerful deity.

“In this country, most of the estates, when Hindus from India come here, they worship Mariamman... mostly in estates, the temple we built in the early days are Sri Maha Mariamman temple, so that’s why every estate you can see Amman temple,” he told Malay Mail. 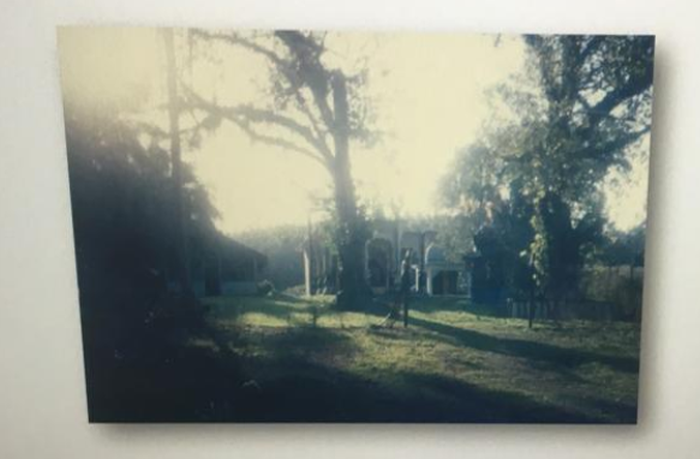 A view of the temple's condition from the front in 1990. — Screengrab of picture courtesy of K. Chellappa

While the temple’s pro-stay faction had reportedly highlighted the Arasamaram or sacred fig trees in the temple’s compound as being previously gazetted as 125 years old, Chellappa was quick to point out that the issue at hand was not about trees.

“The subject matter is the temple, not trees, so let’s not get distracted by what they are telling. Basically, to prove that the temple was there, you have to show records,” he said. 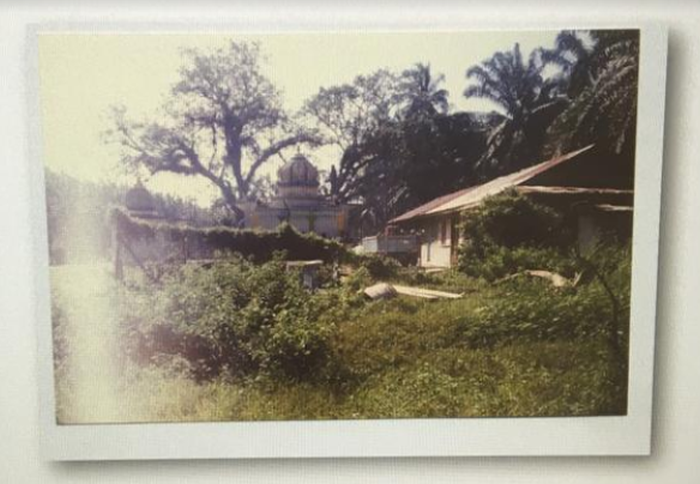 A view of the temple in 1992 when its entrance was located at the back. — Screengrab of picture courtesy of K. Chellappa

According to Chellappa, the temple was previously “abandoned” in 1990 by the former workers of the Seafield rubber estate who left after signing an agreement to receive compensation from Consolidated Plantations Berhad when the land was sold to developer Sime UEP Properties Bhd.

When Sime UEP wanted to develop the land where the temple was located, Chellappa said Nagaraju Merganathan and the latter’s father and former Seafield worker Merganathan Nallo then sought his help to “save” the temple that was “deserted.”

“I came and asked Nagaraju and his father where are all the people, they said they don’t know where,” he said, adding that the temple was then in a jungle area with the temple’s entrance then at the back.

Chellappa said a temple committee was then formed in 1993 with himself elected president and tasked with dealing with legal matters and government departments, while Nagaraju became the temple secretary in charge of temple operations. The temple was also registered with the Registrar of Societies on December 24, 1993, he said.

Chellappa said the Seafield temple had engaged the late Karpal Singh and Gobind Singh as its lawyers to seek an injunction in December 1996 to stop the developer and then Barisan Nasional-led Selangor government from demolishing the temple.

Chellappa claimed that Nagaraju and his group objected in 2001 to the relocation of the temple, with Chellappa alleging that he was forced to leave the temple when Nagaraju’s group took over the temple. Chellappa later filed a lawsuit in court over which was the rightful temple management body.

A view of the temple from the front in 1992. — Screengrab of picture courtesy of K. Chellappa

What happened in the courts

Chellappa highlighted the High Court’s decision in two separate matters — one involving the land owned by a private developer, and another involving an internal dispute on who was the rightful temple administrator.

For the land matter filed in 1996, it ultimately resulted in a consent judgment or a court order with terms agreed by all parties being recorded on March 11, 2014 at the High Court in Shah Alam.

The consent order was between Chellappa as the temple’s public officer against Sime UEP Properties, the Selangor Town and Country Planning director, the Selangor government, the land’s subsequent owner One City Development Sdn Bhd and Merganathan Nallo. Nagaraju was allowed to intervene just to be bound by the consent judgment.

Among other things, the consent order required Nagaraju and his group who were then occupying the existing temple to vacate the land and hand it over to One City Development within two months after a new temple is built on a new land known as Land A, and with One City Development to deposit RM1.5 million for the temple including the new temple’s construction costs.

The consent order also stated that an additional one-acre land named Land B would be given to the temple’s rightful management body once the existing temple is vacated, while the Selangor government would gazette Land A and Land B for places of worship.

The consent order also said a lawsuit filed in 2001 would be where it was decided if Nagaraju or Chellappa would have the right to possess and manage the new temple on the new plots of land.

As for the 2001 lawsuit by Chellappa against Nagaraju and nine others, the High Court on July 25, 2014 declared that Nagaraju was not validly possessing and managing the temple since 2001.

Chellappa said Nagaraju did not appeal against the 2014 consent judgment or the 2014 decision that declared Chellappa as legally being the temple’s administrator. 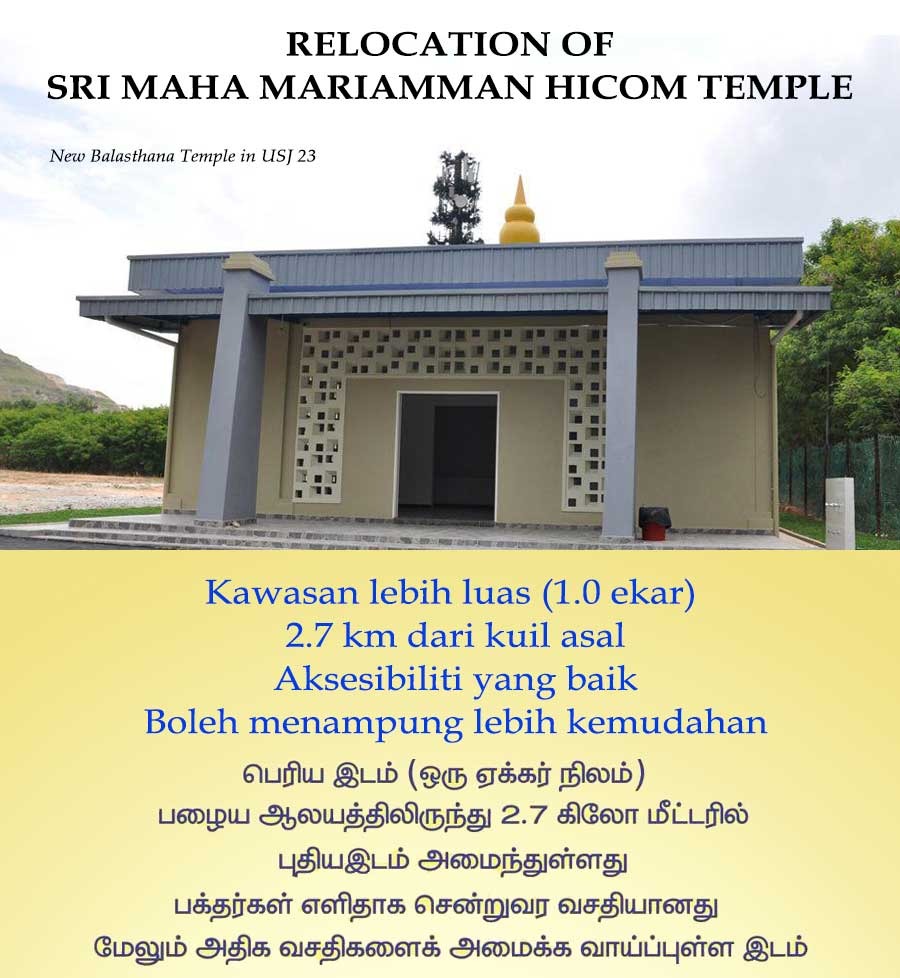 A poster showing the already constructed temporary shrine or Balasthana at the new plot of land. — Picture courtesy of K. Chellappa

Following the 2014 consent judgment, Chellappa said that a Balasthana has been built in 2017 at the new site in USJ 23 or Land B which is 2.5 kilometres away from the existing temple.

Hindu Sangam explained that a Balasthana is a temporary shrine to house the relocated statues of the deities pending the construction of the new temple, or typically when a temple is being renovated.

“The new site we already built a small temple for relocation, developer gave us the money, we built it.

“We want to have a nice temple and multipurpose hall in the new site, we also want to do arts and cultural centre, school of Hinduism studies and also a community service centre,” Chellappa said of the plans for Land B.

As for Land A measuring 15,000 square feet near the existing Seafield temple, Chellappa said the temple committee had decided to return it to the developer as it was “landlocked”, adding that the developer will be paying another RM1 million for this returned land once the temple is relocated.

He clarified, however, that the previous RM1.5 million and the additional RM1 million does not go to him, but rather to the Sri Maha Mariamman Hicom temple committee that is registered with the Registrar of Societies.

“The deities are still at the current temple, we cannot get them relocated, because all the fiasco going on,” he said. 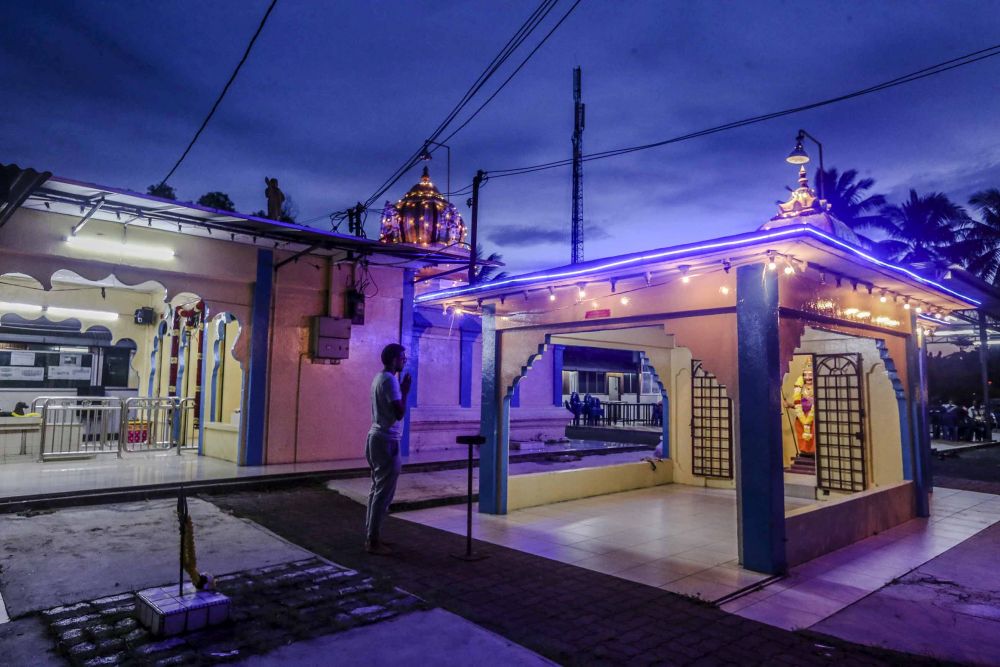 Before this week’s riots

The High Court had reportedly on September 28 asked those occupying the temple to vacate the land by October 15, but several temple devotees including Nagaraju went on a hunger strike.

One of those who went on the hunger strike reportedly claimed it would be insensitive to ask for the relocation in the midst of the nine-day Navarathiri festival and ahead of the Deepavali celebrations on November 6.

Following the hunger strike, the developer One City Development had on October 26 reportedly announced that it would agree to delay the relocation to November 22 as a gesture of goodwill.

One City Development had said that all parties should on November 22 comply with the court order to allow the company to take over the USJ 25 land where the existing temple is, and to allow the relocation of the temple to the new USJ 23 land measuring 0.4 hectares and with RM2.5 million already allocated for the new temple’s construction costs.

On November 21, the pro-stay faction under the Save Seafield Sri Maha Mariamman Devasthanam temple taskforce held a protest at Parliament and handed over a memorandum addressed to the prime minister, seeking the latter’s aid to resolve the matter.

Hindu Sangam’s Mohan told Malay Mail that its religious advisory council was asked for advice in a November 24 (last Saturday) meeting with Pakatan Harapan lawmakers regarding the temple.

Mohan said Hindu Sangam, in a mediatory role, had proposed a solution to retain a small plot of land on the existing Seafield temple location to have a temple for heritage purposes similar to Mid Valley Megamall where a Hindu temple was retained, while also at the same time building a new temple on the new plot of land.

But before he could get an appointment with One City Development on November 26 (last Monday), the two-day unrest happened. Mohan told Malay Mail on Tuesday that Hindu Sangam would seek a fresh appointment with the developer to see how the issue can be settled amicably.

Back to the courts again

Chellappa said Nagaraju has this year been declared by the court to be a “vexatious litigant” after the latter brought eight similar lawsuits that were dismissed, noting that this meant Nagaraju would not be able to file new legal proceedings without first seeking the court’s permission.

Today, an application by the pro-stay faction to freeze the relocation of the temple will come up at the High Court. Chellappa, who has been named one of the seven respondents, described the latest legal action as merely a “tactic” to buy time and to drag out the matter.

Prime Minister Tun Dr Mahathir Mohamad and Selangor Mentri Besar Amirudin Shari are expected to make key announcements in relation to the temple issue later today, with the latter saying that a solution would be announced.