The MCMC had asked for the websites providing ‘live’ updates and results for the polls to be blocked or redirected to the IP address used to host a standard government legal notice that a site has been blocked. — AFP pic
Follow us on Instagram, subscribe to our Telegram channel and browser alerts for the latest news you need to know.
By By Zurairi AR

KUALA LUMPUR, May 19 — The Malaysian Communications and Multimedia Commission (MCMC) had ordered censorship for several sites providing “live” updates and results for the polls, fearing it may affect “national stability, public order and harmony, and economic stability”.

According to a copy of its May 9 confidential request to internet service providers (ISPs) sighted by Malay Mail, the MCMC asked for websites live.malaysiakini.com, live.undi.info and undi.info to be blocked or redirected to the IP address 175.139.142.25 — the address used to host a standard government legal notice that a site has been blocked.

“The commission hereby request you to undertake the actions under Section 263(2) of the Communications and Multimedia Act 1998 with respect to the following URL/web address,” said the letter signed by MCMC chief operating officer Datuk Mazlan Ismail, on behalf of its chairman Tan Sri Halim Shafie.

“Specific to this request, due to the nature of the offence that may affect national stability, public order and harmony, and economic stability, you are required to perform the redirection immediately.”

The address live.malaysiakini.com refers to portal Malaysiakini’s “live” coverage, while live.undi.info is the “live” version of undi.info, a database of lawmakers and election candidates, also run by Malaysiakini.

The MCMC said the three sites had allegedly contravened Section 233 of the Communications and Multimedia Act, which handles “improper use of network facilities or network service”.

Section 233 deals with “any comment, request, suggestion or other communication which is obscene, indecent, false, menacing or offensive in character with intent to annoy, abuse, threaten or harass another person,”

If found guilty, one stands to be liable to a fine not more than RM50,000, or prison not more than one year, or both — and further fine of RM1,000 for every day the offences is continued.

Failure to comply with the MCMC’s request to block the three sites would be an offence under Section 242 of the same act, the ISPs were told.

Section 242 handles compliance to the Act, punishable with fine not exceeding RM100,000, or prison not exceeding two years, or both.

In copies of the emails from MCMC’s Network Media Management Department under its Digital Surveillance Division also sighted by Malay Mail, the directive to block the three sites came at 9.13pm of the polling day.

The emails were sent to not just TM (and its subsidiary Webe) and Maxis, who were found censoring those sites by watchdog Sinar Project, but also to other ISPs such as Celcom, Digi, YTL (which runs Yes), TIME, Mykris, Redtone, Aries Telecoms, and Extreme Broadband.

The directive was then revoked in another email sent at 11.45pm the same night.

In a statement yesterday, MCMC claimed that censorship on live.undi.info was due to “public complaints” of allegedly inaccurate information displayed. It did not mention the blocking of live.malaysiakini.com.

Sinar Project had on Wednesday reported that broadband providers Telekom Malaysia and Maxis blocked access to live.undi.info on the evening of polling day, with the first measured incident of censorship occurring at 9.55pm.

Maxis later told Malay Mail that matters related to the blocking of websites should be referred to MCMC and that the company is subject to local laws regulating ISPs.

The censorship took place before official results showed that the Barisan Nasional coalition had failed to retain a simple majority of parliamentary seats required to form government.

The release of official results from the Election Commission was also halted around the same time that night, until Tun Dr Mahathir Mohamad announced that Pakatan Harapan had won the majority to form the federal government around midnight.

The EC subsequently released the official results for states that were won by at least a simple majority in the early morning of May 10, and PH was officially announced as the winner for Putrajaya around 5am. 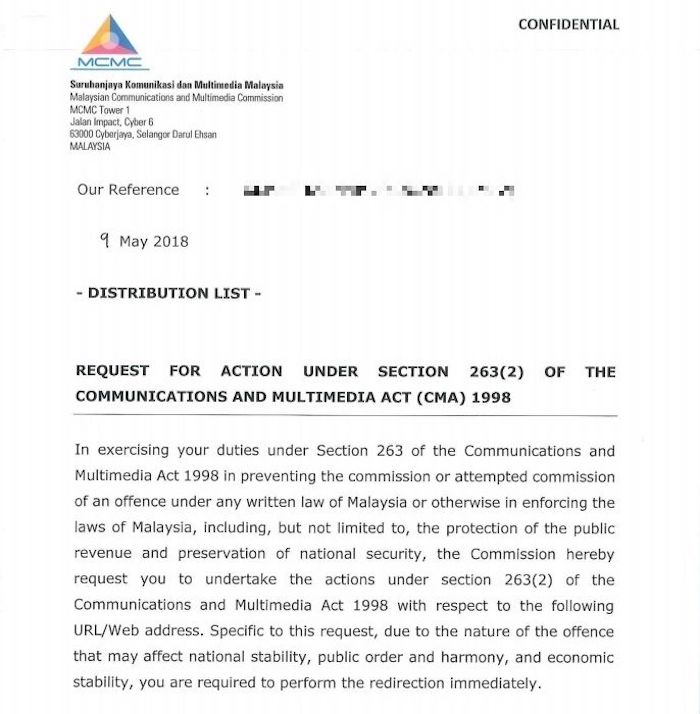 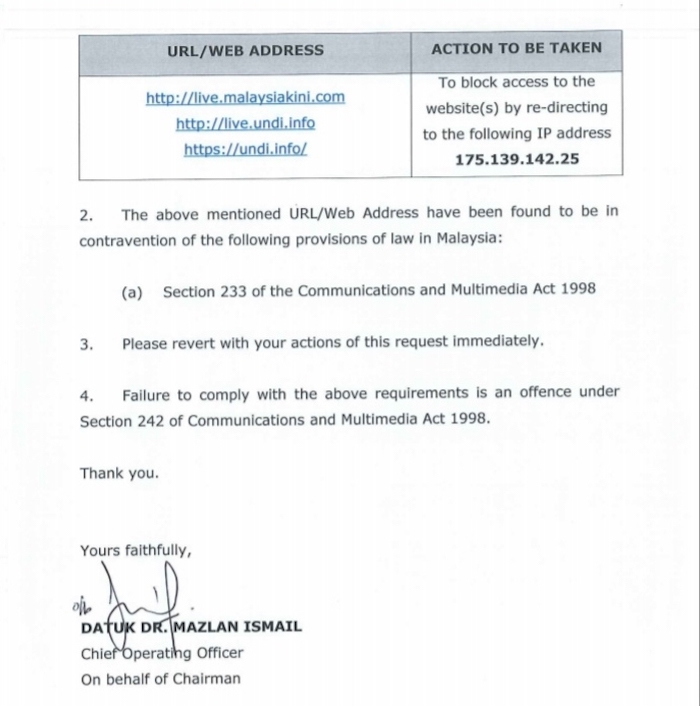 A copy of MCMC’s May 9 confidential request to internet service providers (ISPs) sighted by Malay Mail.