Datin Rozita Mohamad Ali (centre) is escorted by police at the Shah Alam High Court on March 29, 2018. ― Picture by Yusof Mat Isa
Follow us on Instagram, subscribe to our Telegram channel and browser alerts for the latest news you need to know.
By By Danial Dzulkifly

The ruling was a revision of an earlier Sessions Court decision in which Rozita ― previously dubbed a “Datin” in media reports ― was released on a good behaviour bond for five years with surety of RM20,000 for causing grievous hurt to Suyanti Sutrinso, who was only 19 at the time, and which led to a public uproar.

“I view the court bond as issued incorrectly and it does not fit the offence,” Judicial Commissioner Datuk Seri Tun Abdul Majid Tun Hamzah said in his ruling.

Tun Abdul Majid also noted that Suyanti’s decision to withdraw her police complaint should not have been taken into consideration by the Sessions Court when deciding on Rozita’s sentence.

“Then it is up to the attorney-general to pursue the case against the alleged perpetrators if there is sufficient evidence,” he said. 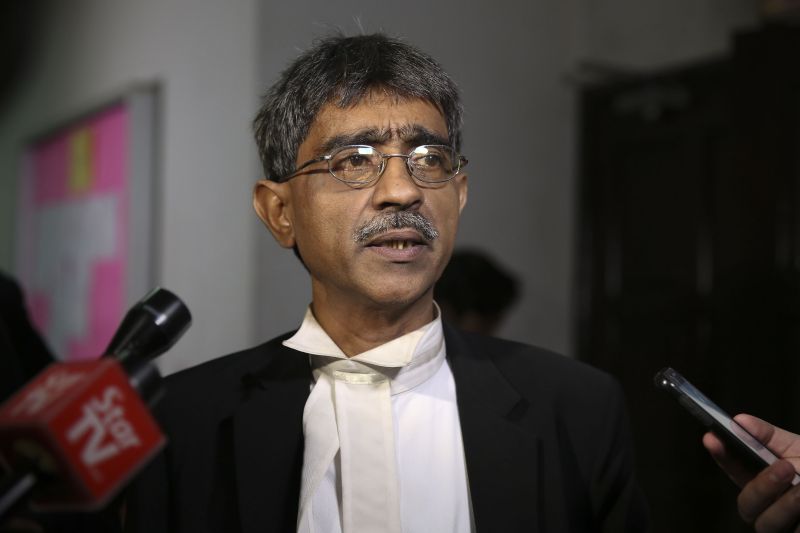 Lawyer Haniff Khatri Abdulla speaks to journalists outside the courtroom of the Shah Alam High Court on March 29, 2018. ― Picture by Yusof Mat Isa

Lawyer Hanif Khatri Abdulla who represented Rozita said he had been ordered to file an appeal and pleaded for a stay of execution.

The court rejected the stay plea pending the appeal.

Rozita, who dressed all in black today, including her sequinned and beaded headscarf, was immediately escorted by police officers out of the courtroom and towards the courthouse lock-up.

She was seen making an effort to cover her face from public view throughout the court proceedings earlier, either with a pair of sunglasses or lifting up the ends of her tudung.

Though she had briefly shown her face while she in the dock, she moved immediately to wrap her black tudung tightly around her face when escorted out of the courtroom, leaving only her forehead and part of her trimmed eyebrows visible where the cloth had slid down.

During hearing earlier today, the head of the Selangor prosecution team Muhamad Iskandar Ahmad told the court that the case has affected the bilateral ties between Malaysia and Indonesia.

Rozita's case drew public interest after a video of the victim, who was seriously injured and lying near a drain, was shared on social media.

She pleaded guilty on March 15 to abusing Suyanti with a kitchen knife, a steel mop, a clothes hanger and an umbrella in December 2016.

* Editor’s note: Malay Mail is removing mention of Rozita as a “Datin” as it is unclear if she is one. The police have since confirmed that they had never identified her as one.