In explaining the triple digit growth of almost 200 per cent in interest for the laser vaginal rejuvenation procedure, the report highlighted the relatively fuss-free nature of the treatment to tighten the vagina.

“The treatment is relatively pain free and the patient can return to a normal day to day routine very soon after,” the clinic comparison site’s annual global report said.

In its analysis of 10,290 email enquiries to over 100 Malaysian clinics made through the online clinic directory site over the past two years, WhatClinic.com’s data showed a whopping 191 per cent jump in interest in the laser vaginal rejuvenation procedure in Malaysia with a leap from 103 enquiries in 2015 to 300 in 2016.

At an average starting price of RM2,575 based on last year’s figures, laser vaginal rejuvenation is also the cheapest among the country’s top 10 plastic surgery treatments WhatClinic.com users enquired about. 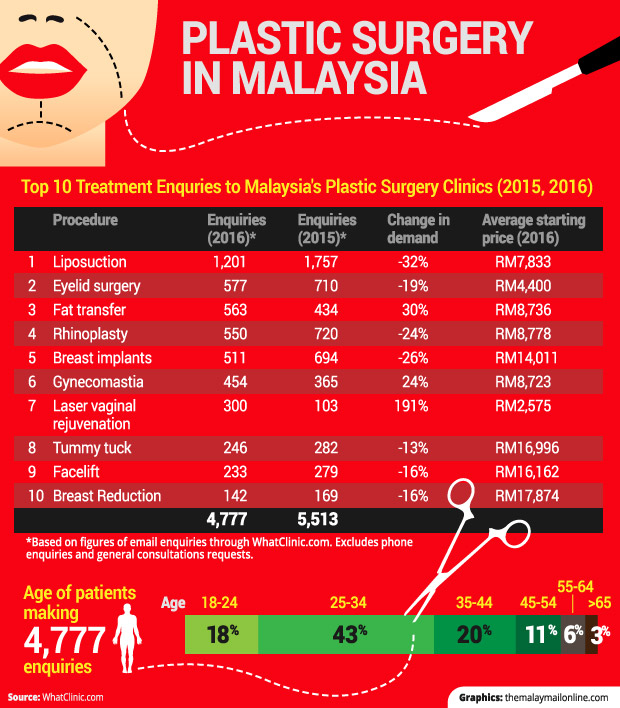 Based on both enquiries locally and from abroad, liposuction which removes excess body fat attracted the greatest interest with 1,201 enquiries alone last year, while eyelid surgery and the procedure to shift body fat to another part of the body were also in the top three list last year at 577 and 563 enquiries respectively.

In terms of percentage, however, interest in seven out of the top 10 treatments sought by patients fell at an average rate of 20.8 per cent when compared against the previous year, including liposuction and eyelid surgery which fell by 32 per cent and 19 per cent, as well as breast implants (-26 per cent) and rhinoplasty to reshape the nose (-24 per cent).

It is unclear how big a role pricing plays in these trends, as the average starting price last year for the seven treatments that experienced a fall in interest mostly fall in the range of RM7,833 to RM17,874 with only one of them at RM4,400 (eyelid surgery).

Two of the three treatments in the list showing growing popularity had average starting prices of RM8,723 (gynecomastia or treatment to correct enlarged male breasts) and RM8,736 (fat transfer) as compared to rising star laser vaginal rejuvenation at RM2,575.

Weighing in on the interest levels in Malaysia’s plastic surgery services, WhatClinic.com said: “We haven’t seen a huge increase overall, in fact there was a 4 per cent decrease in interest in plastic surgery when we compared the past three months to the same period one year ago—however there has been growth from overseas in some treatments.”

Out of the 4,777 email enquiries last year for local plastic surgery services, the bulk of them came from those in the younger age groups of 25 to 34 at 43 per cent and 35 to 44 at 20 per cent respectively, with demand gradually decreasing from these two age groups onwards. Those in the 18 to 24 age group represent the third largest group by accounting for 18 per cent of the enquiries.

“The demographics are consistent with global trends of recent. Digitally connected millennials are bombarded with more and more ‘versions’ of beauty by brands and their peers. This causes pressure to achieve the best possible look,” Philip Boyle, WhatClinic’s Head of Consumer Matters, told Malay Mail Online.

Although women continued to dominate last year in terms of number of enquiries made for plastic surgery services in Malaysia at 70 per cent, WhatClinic.com noted that the number of men seeking such treatments has seen a “sharp increase” over the past few years, predicting that the balance will shift in the future. 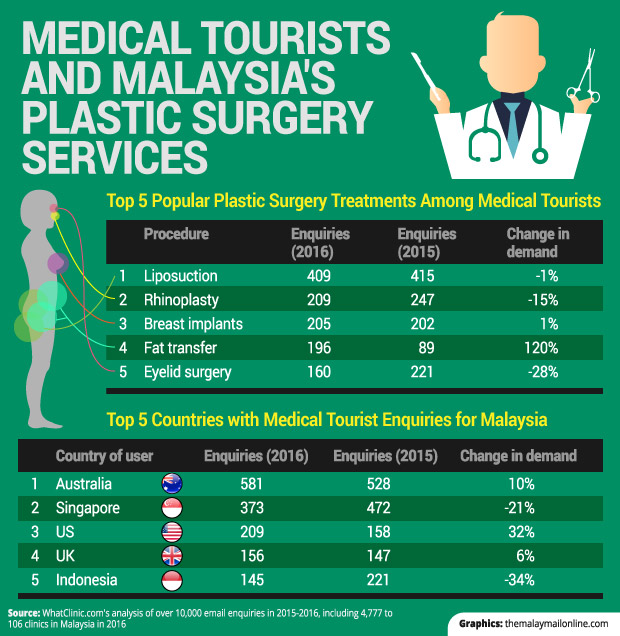 US and Australia loving it

Boyle cited “currency advantages” for Malaysia’s popularity among visitors from Australia and the US, while WhatClinic.com predicted that the strong growth figures from Australia meant the trend from that country was likely to continue.

“The US is Malaysia’s fastest growing medical tourism market, growing 32 per cent in the past 12 months. This has no doubt been influenced by the weakening ringgit (MYR) against the dollar (USD),” the report said.

WhatClinic.com also attributed Malaysia’s popularity for plastic surgery to government initiatives to promote the country as a medical tourism destination, as well as the improved quality and reputation of Malaysian plastic surgeons.

As for the plastic surgery treatment in Malaysia favoured by medical tourists, liposuction was the firm favourite last year with its 409 enquiries. This is almost twice as many as the second on the list, rhinoplasty at 209 enquiries.

This was followed by breast implants, fat transfer and eyelid surgery, with the latter showing a marked decline of 28 per cent from 221 enquiries in 2015 to 160 enquiries last year.

“Fat transfer appears to be the treatment of the year, experiencing 2.2x growth in the 12 months to January 2017,” the report said, referring to the growth of 120 per cent from 89 enquiries in 2015 to 196 enquiries last year.

What is ‘beauty’ now?

Boyle said the treatment trends reflect consumer interest, with more showing a preference for safer treatments such as fat transfer — which is less risky due to the use of the patients’ own cells.

For the star treatments of laser vaginal rejuvenation and fat transfer, Boyle cited “increased availability, increased awareness, word of mouth” as factors driving the demand for these procedures in Malaysia.

Commenting on the decline in demand for some treatments such as liposuction, eyelid surgery and rhinoplasty, Boyle said: “There are now more non-surgical options than ever before—fat freezing and the non-surgical nose jobs are now available as less invasive, and more affordable options.”

Boyle also told Malay Mail Online that the change in demand for certain types of plastic surgery procedures is linked to both affordability and a change in the sense of beauty.

“We have seen global trends for butt implants and fuller thicker eyebrows (which many have attributed to popular celebrities and models) We have also seen in the UK, smaller breast implants, as more and more women become interested in fitness. Laser hair removal has become extremely popular.

“We have also seen growth in demand for eyelid and chin surgeries.

“All of these are linked to changes in what ‘beauty’ means. Not to mention the medical aesthetic market, which is bringing out things like vampire facials and fat freezing to consumers,” he said.

(A vampire facial is where a person’s own platelet rich plasma is injected into her face to help the skin renew and rejuvenate.)

The next big hit?