KUALA LUMPUR, Feb 7 — Malaysia has failed to rein in household debt that started ballooning since the 2007 global financial crisis and may expose the country to crisis should the credit bubble burst, according to a report released this week.

In the report tracking household liability in the seven years since the US subprime crisis by international research firm McKinsey Global Institute (MGI), Malaysia’s consumer debt was shown as having surpassed even that of the US.

The Southeast Asian economy was also listed among seven countries most vulnerable against debt.

“In developing economies, household debt is generally at much lower levels, but it is growing rapidly. In Thailand and Malaysia, household leverage exceeds US levels,” said the report titled “Debt and (not much) deleveraging”.

“The question today is whether countries with high levels of household debt are at risk of a crisis, or whether high debt levels can be sustained.”

Latest data from the fourth quarter of last year showed that Malaysia’s household debt-to-gross domestic product (GDP) ratio is 146 per cent, an increase from 139 per cent during the same period in 2007.

The other countries deemed “vulnerable” besides Malaysia were the Netherlands, South Korea, Canada, Sweden, Australia and Thailand, where their debt-to-income ratio might be “unsustainable”, according to MGI. 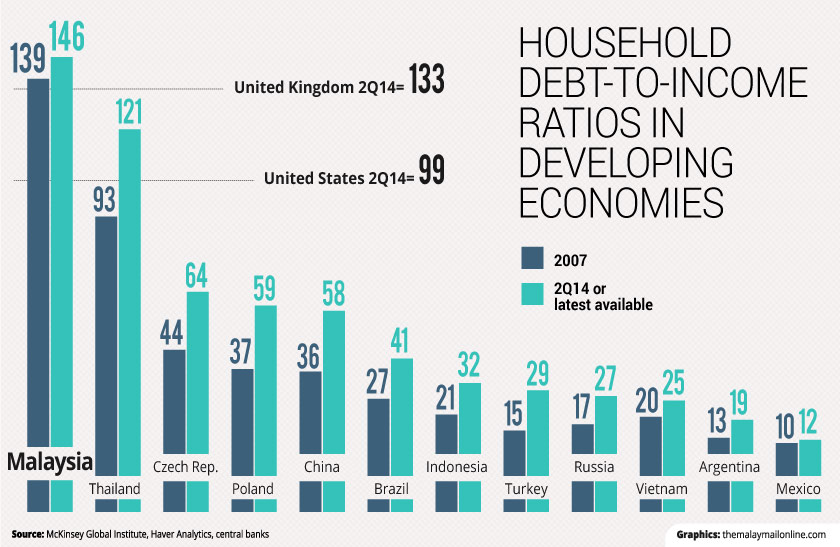 In the chapter titled “Lessons not learned”, MGI warned that untenable household debt in some of the world’s largest economies, such as the US, had been “at the core” of the 2008 financial crisis.

“These figures suggest potential risk but do not signal imminent crises. The creditworthiness of borrowers, the ability of lenders to assess risk, and the state of the macro-economy will all influence the outcome.

“Nonetheless, these countries should, at a minimum, be monitoring the situation very carefully,” said MGI in the report.

MGI also said that the main cause behind rising household debt was high mortgage rates, highlighting that household debt is lower in countries where more people rent rather than buy their homes.

The MGI report also revealed that global debt has grown by US$57 trillion (RM202 trillion) since 2007, with developing economies contributing roughly half of the growth.

In March last year, Bank Negara Malaysia announced that household borrowing had spiralled to 86.6 per cent of the total value of the entire economy in 2013, up from just over 81 per cent in 2012.

Despite that, Prime Minister and Finance

Minister Datuk Seri Najib Razak said in November that the figure remained manageable despite being among the highest in the region, as the debts were backed by physical assets that will appreciate in value over time.