In the thousands, GST critics hit streets in May Day rally (VIDEO)

Anti-GST protesters gathering at the National Mosque before converging at Dataran Merdeka in Kuala Lumpur, May 1, 2014. — Picture by Yusof Mat Isa
Follow us on Instagram, subscribe to our Telegram channel and browser alerts for the latest news you need to know.

KUALA LUMPUR, May 1 — Smarting from rising living costs, thousands of demonstrators hit the streets of the capital today, protesting an unpopular consumption tax that will be rolled out in April next year.

Dressed in striking red, wearing headbands and carrying assorted placards and banners, multiracial crowds gathered at four key points in the city from 11am — the park at the foot of Petronas Twin Towers, around the Sogo mall, at Dataran Maybank and near the National Mosque.

As their numbers swelled, the crowd took up the chant: “Hancur! Hancur! Hancur GST!”, signalling their resolve to remove the Goods and Services Tax.

In efforts to widen its narrow tax base, Malaysia’s government approved a flat rate consumption tax, set at 6 per cent, to start from April next year.

The move is proving to be unpopular, given that it comes at a time when Malaysians are already grappling with rising costs after the government rolled back subsidies on fuel and electricity.

Opponents of the new tax argue that it is regressive and will punish people on lower incomes. 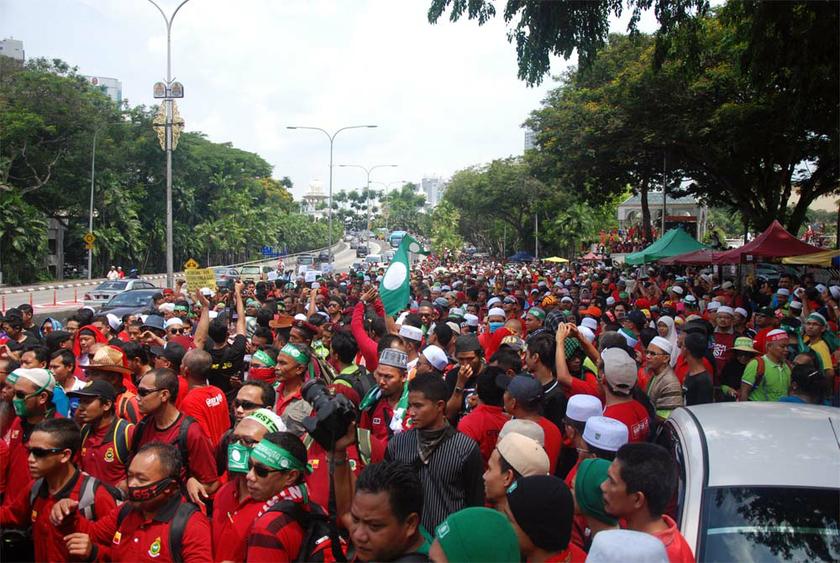 Protestors in their thousands converged on the streets of Kuala Lumpur to protest a proposed consumption tax that is expected to negatively impact the cost of living in Malaysia, May 1, 2014. — Picture by Yusof Mat Isa

GST — Protest till it is dropped

Today’s rally, themed “GST — Protest till it is dropped”, coincides with the International Worker’s Day celebration.

The Pakatan Rakyat (PR) federal opposition has pledged to back the protest to stop Putrajaya’s roll-out of the controversial tax next year.

PR politicians were prominent among the crowds at the rally.

Outside the National Mosque, PKR secretary-general, Datuk Saifuddin Nasution Ismail, took charge, calling on the people to demand the government call off the new tax.

“You continue with the GST, the people will rise and topple the Umno-Barisan government,” he said.

“We must pressure BN. Only then will the government realise they are not popular and are rejected by the people” PAS MP for Kuala Krai Hatta Ali said from his vantage point atop a lorry.

“Today is not just Workers’ Day. Today is a day for Malaysians to demand for our rights. Oppose GST!”

“We must also press for free and fair election. Long live the people!” said the former co-chairman of elections reform watchdog, Bersih 2.0.

Parti Sosialis Malaysia (PSM) secretary general S. Arutchelvan, one of the leaders behind the rally, called the GST a regressive tax.

“Tax systems place the onus on the rich. Taxes are collected from the rich and distributed to the poor. With the GST, we see the poor being taxed,” he told reporters at the KLCC Park.

“If we have free education, healthcare and an increase in wages, then yes, it is justified. But subsidies are being cut and wages are not increasing,” he added. 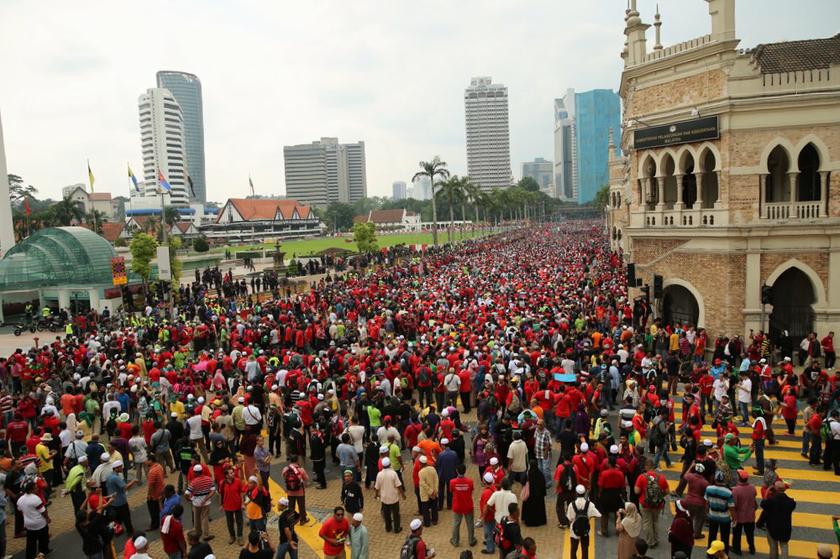 Thousands of Malaysian protesters turn up to protest against the Goods and Services Tax (GST) in front of Dataran Merdeka, on May 1, 2014. — Picture by Choo Choy May

At Dataran Maybank, the rally has taken a festive air, the shrieks from vuvuzuelas mingling with car and motorcycles horns as people march towards the historic Dataran Merdeka, about 1km away.

The street demonstration moved along peacefully despite minimal police supervision — just about 10 police officers were spotted along the key route to Dataran Merdeka.

But scores of policemen were on guard at Jalan Raja. Also on duty there were City Hall officers, identifiable by their neon yellow vests, manning the barricades that block off access to Dataran Merdeka.

PAS’ volunteer unit, dressed in their trademark maroon shirts, were on hand to help with traffic control.

The scene was repeated along other key routes to Dataran Merdeka.

At the busy Jalan Bukit Bintang, one of three roads that demarcate the shopping and commercial hub of Kuala Lumpur’s Golden Triangle, policemen there played a vital role in ensuring the marchers could proceed easily to their convergence point.

Many of the demonstrators appear to blame the ruling Barisan Nasional coalition’s main party, Umno, for their hardship.

As they walked, the protestors began changing their chants to: “Tolak GST! Hancur BN! Jahanam Umno!”

After congregating at Jalan Raja, a small group of young protesters, seemingly restless from listening to the numerous speeches, attempted to invade the historic Dataran Merdeka that was cordoned off to rally-goers.

“We can listen to speeches during other times, bro. But now, let us go to Dataran,” a male protester in his early 20s, clad in black, was heard shouting.

The protesters were members of student movements, with one of them waving the flag of the Antifa Malaysia group.

Antifa is a worldwide anti-fascism movement linked to anarchism.

The attempt was quickly headed off by alert members of the PAS Charity Unit, which lead to a scuffle breaking out, but which prevented the rally from turning ugly.

The rally that kicked off under a blazing hot sun ended as the skies turned gloomy and opened up on the crowd.

Demonstrators started dispersing at about 6pm when it started drizzling. 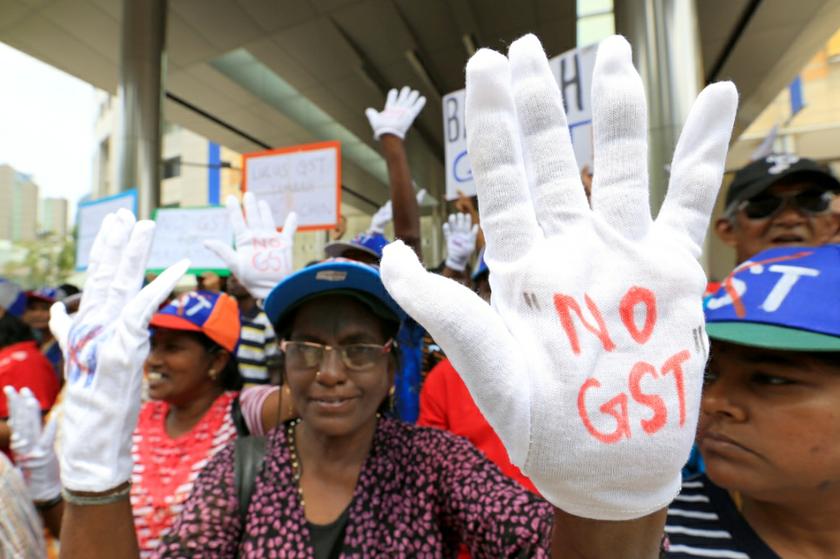 Crowds have gathered at various locations in Kuala Lumpur by noon before converging at Dataran Merdeka for an anti-GST rally, May 1, 2014. — Picture by Saw Siow Feng