Kuning's paintings, merchandise and memorabilia will be on sale to raise funds for Furry Friends Farms, which the former stray dog had been staying with since 2009 prior to his passing in September. — Photo courtesy of Myza Nordin
Follow us on Instagram, subscribe to our Telegram channel and browser alerts for the latest news you need to know.
By SYLVIA LOOI

KUALA LUMPUR, Oct 25 — After more than a month following the death of Kuning, Furry Friends Farm (FFF) will be organising a memorial for their stray dog that played a pivotal role in rescuing abandoned dogs at Pulau Selat Kering in 2009.

FFF president Myza Nordin said the event would be held online on November 14 at 11am via FFF’s Facebook page and Instagram.

Kuning died at his caretaker’s home on September 24 and was later buried at the sanctuary in Kundang, Rawang.

Speaking to Malay Mail, Myza said the event was also in conjunction with World Animal Day that is celebrated on October 4.

“There will be two sessions to the event. The first session will be a tribute to Kuning where we share his stories with our viewers and the second session will be his memorial,” she said.

He added that viewers will also be taken on a virtual tour of FFF’s 0.8 ha sanctuary during the memorial. 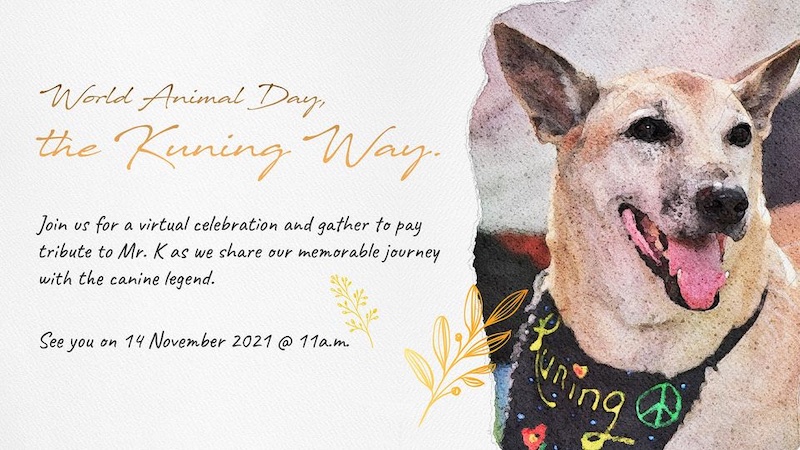 Myza said a slew of other events have been lined up for the celebration, scheduled to end at 4pm.

As part of FFF’s fund raising, there will be an auction of Kuning’s paintings, merchandise and memorabilia.

“There will also be a charity vegetable pie sale where proceeds from the sale will be used to feed our 350 dogs,” she said, adding that each pie is retailed at RM10 and it would be fed to the dogs at a later date.

As a remembrance to Kuning, there will also be a sponsorship drive for the farm’s senior dogs.

“We have identified some 20 senior dogs for that campaign,” she said, adding that the sponsorship is for one year.

One of them, said Myza, was Macho, who was rescued together with Kuning.

“The sponsorship is ideal for animal lovers who could not keep dogs as pets due to commitments,” she said.

It was previously reported that some 400 dogs were found abandoned on the desolate island by Pulau Ketam residents in 2009.

The Star reported that many of them are believed to have died of hunger while the stronger ones survived by eating canine carcasses.

Kuning, or affectionately known as Mr K, was instrumental in helping rescuers by swimming to Pulau Selat Kering and herding the dogs into cages and traps set by the rescue teams.

Kuning, himself a rescue from Pulau Selat Kering, had been staying at FFF since 2009.