A car in Kuala Lumpur was spray painted in red over alleged bad parking. ― Picture via Facebook/mcclubz
Follow us on Instagram, subscribe to our Telegram channel and browser alerts for the latest news you need to know.
By MILAD HASSANDARVISH

According to photos posted on Mcclubz Facebook page, a white minivan whose driver appears to have parked improperly had caused dissatisfaction or obstruction of traffic to other motorists.

As a result, the car owner was shocked to see his car painted in red with words such as “Mati” (die), “Gila” (mad) and “Park Properly”.

Although there were no mention of the time and location the incident, Autonion body workshop in Taman Wahyu, Kuala Lumpur confirmed that the car was sent there for the body works.

The Facebook post, which has been shared over 1,400 times, has garnered many comments from netizens, praising the vandal’s action. 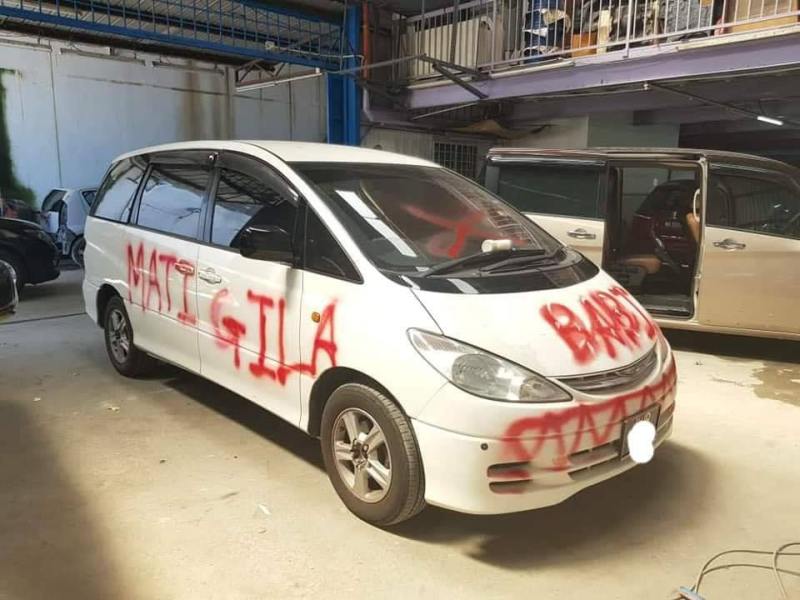 The minivan was spray painted in red with words such as ‘mati’, ‘gila’ and ‘park properly. ― Picture via Facebook/mcclubz

Some social media users agreed that the car owner’s negligence deserves such consequences while others labeled the vandal’s actions inappropriate and unprofessional.

Another user Domnic Danaraj Peter advised the driver to be more responsible next time and not cause inconveniences to others.

“While it many have very sensitive graffiti and not too Malaysian, the message is clear: zero tolerance to indiscriminate parking,” he added.

“Be a responsible drive, your selfish convenience can cause extreme inconvenience to others.”

However, this is not the first time that road users express their rage over poor parking by other motorists.

Last month, an infuriated driver in Bangsar lost her patience and repeatedly knocked into a double-parked white hatchback, which prevented her from reversing to exit the parking lot.

this lady smashing her car into a car who double parked in front of her is the funniest thing i’ve seen all week.

check out the thread to see what she wrote on a paper she put on the car. pic.twitter.com/5nVOtORtF9