Director Mark Teh questions the dreams and aspirations of Vision 2020 in ‘Version 2020’. ― Picture by Ahmad Zamzahuri
Follow us on Instagram, subscribe to our Telegram channel and browser alerts for the latest news you need to know.
By By Melanie Chalil

KUALA LUMPUR, March 15 ― If you lived through the 90s, then Vision 2020 ― the Malaysian model put forth by former prime minister Tun Mahathir Mohamad to make the country an industrialised developed nation ― needs no introduction.

But what does it really mean to be a high-income, fully developed nation? Will we ever get there?

In Version 2020 ― The Complete Futures of Malaysia, a theatre performance which premieres tonight at Taman Tun Dr Ismail’s Five Arts Centre, director Mark Teh of Baling fame questions these dreams and aspirations that today, despite being two years away from 2020, never seemed so far away.

“The closer we are to 2020, it’s very clear we are not going to get there, whatever there meant in the first place,” he told Malay Mail.

Unlike most theatre performances, research for Version 2020 started three years ago when Teh met with his collaborators, who are activists, filmmakers and performers, and began talking about Vision 2020, also known as Wawasan 2020.

“At that point, we were three to four years away from 2020 but it began to get very quiet especially on whether we have reached the goals we set for ourselves.

“All of us have lived through the Vision 2020 era when it was proposed and those of us who grew up in the 90s had to draw our vision of 2020 in art class and write essays on what the future will be like,” he recalled.

Version 2020 was commissioned by the Spielart Festival Munich in Germany where it premiered last October before touring in Tokyo’s Theatre Commons last month. 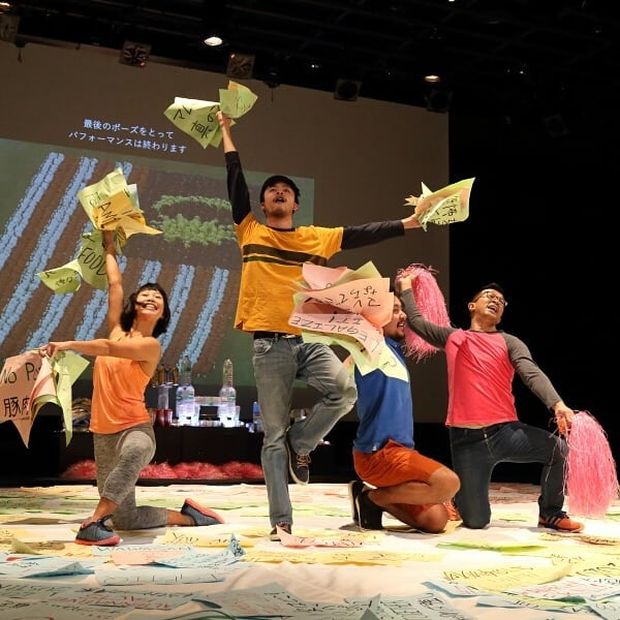 A scene from ‘Version 2020’ being performed in Japan. – Picture via Instagram/Five Arts Centre

Known for his interdisciplinary approach, Teh and his team started tracking down children’s drawings, essays, school murals, books and policy speeches from the 90s.

“Imri performed in one those Wawasan 2020 parade in 1994 ― that’s how many young people were inculcated with Vision 2020 propaganda,” said Teh, who earned a master’s degree in art and politics from Goldsmiths.

The show will include an excerpt of the speech that Mahathir gave in 1997, a few months before the Asian financial crisis when Malaysia’s economy was growing rapidly.

This documentary theatre performance which combines personal experiences is the third chapter of The Complete Futures of Malaysia, an ongoing project series presented in various formats including exhibitions and a lecture.

“For this performance, I wanted to reflect a little bit more personally, so I asked the five performers to look back at our own histories and memories of growing up in the 90s – what did the future mean to us? Did we believe in vision 2020? Did it have a big impact in your life?” Teh said.

“Let’s dig deep, let’s look at our own feelings, experiences, contradictions and perspectives of growing up in 2020 and at this moment as we face 2050.” Teh and his team tracked down Wawasan 2020 imagery that ranged from artworks, books, essays and school murals. ― Picture by Ahmad Zamzahuri

He also added that in 2018, the concept of Vision 2020 has been eclipsed by TN50, Malaysia’s newest development policy that aims to transform the country into a leading nation by 2050 and hopes audiences will think about ideas that are being proposed for their future.

“We should be a lot more critical about promises about the future in general and we are going to see a lot of that in the next weeks and months with the elections around the corner,” he said.

Asked if he was worried about wading into the subject of politics, Teh is anything but.

“I don’t think that’s my job ― I don’t think people actively seek controversy unless you want to make headlines.

“My job is to make a good, thought-provoking show that entertains and educates,” he said.