Temple cuisine: Food for the body and soul

KUALA LUMPUR, Dec 7 – Many Buddhist temples offer vegetarian food for those who abstain from meat and these places, the offerings are not limited to just devotees but a large crowd of eaters who throng there for delicious well-cooked meals.

Finding reasonably priced food in the heart of Kuala Lumpur is not easy but the office workers around Jalan Ampang throng to the Dharma Sagely Realm Monastery to fill their tummies. According the annals in the temple’s library, the vegetarian food court was set up in 1994.

Its aim was to promote healthy vegetarian food to the general public. The history of this particular temple goes back further to the 1880s, when it was one of the first temples in the city built from bricks and tiles.

In the old days, it was known as Kun Yam Thong. Following cracks in the temple around 1994 due to tunneling works for the LRT, extensive renovation was carried out from 2000 to 2005. The temple was also renamed the Dharma Sagely Realm Monastery.

The place is organised like a food court with various counters selling different fare and can sit up to 1,000 people at peak hours. It starts with the buffet spread of more than 60 varieties of vegetable dishes including some mock meat items.

Once you select your food, walk to the drinks counter for a glass of brown barley or the slow-boiled sugarcane drink, good to cool you down with the heat. Next is the fresh fruit counter – an abundance of papaya, guava and etc for you to finish off your meal. Noodle lovers can head to the stall selling all kinds of noodles like wantan noodles, curry mee and even Taiwanese noodles. 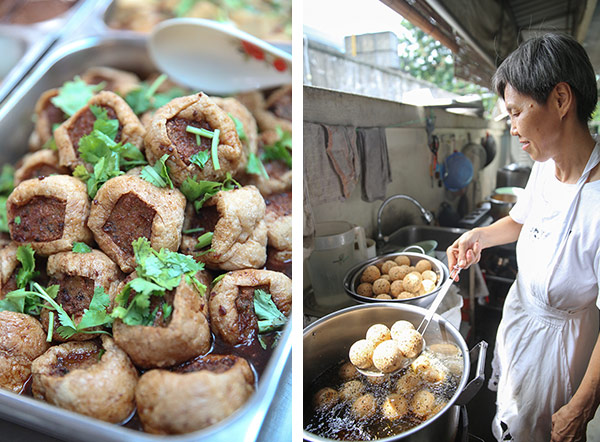 Stuffed tofu puff is one of the items you can find from the buffet spread at the Jalan Ampang temple (left). Ms. Lau fries up jin tui or crispy sesame dumplings (right)

Further down, there are all kinds of snacks like crispy sesame balls or “jin tui”, only available on Wednesdays and Fridays. According to Ms Lau, who runs the stall, their sale proceeds go towards the monastery as well as the food court’s operations.

She was once a tailor and used to do volunteer work. Now she is hired by the temple to run the stall, making delicious treats like the crispy sesame balls. She stuffs them with red bean paste, lotus bean paste and ground peanuts. 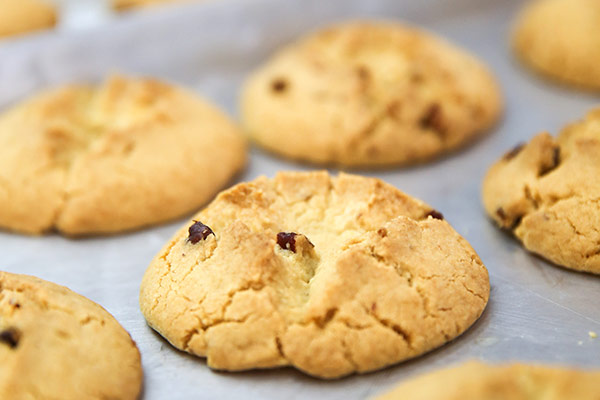 Fresh from the oven, walnut biscuits or hap tau sou

Try and grabthe one with the fragrant peanuts; she makes a small batch each day since it’s rather difficult to wrap this variant. On other days, you get steamed and fried pau together with fried doughnuts. Ms Lau also makes biscuits like hap tau sou with real walnuts or soft buns filled with walnuts and wolfberries or kei chee.

As ata regularcanteen, you are encouraged to clear your own dishes and cutlery by placing them in special buckets on one side of the food court. Food waste is frowned upon and posters placed all around encourage people to choose carefully to avoid wastage. On Fridays, the crowd swells up as they flock here for the weekly special of lui cha. This Hakka specialty is one that is full of vegetables that requires tedious chopping and cooking each of the elements. You get sweet potato leaves, cabbage, choy sum, choi poh or radish, tofu, sweet soy beans and long beans served with healthy brown rice. Toasted peanuts and sesame seeds are added on top. 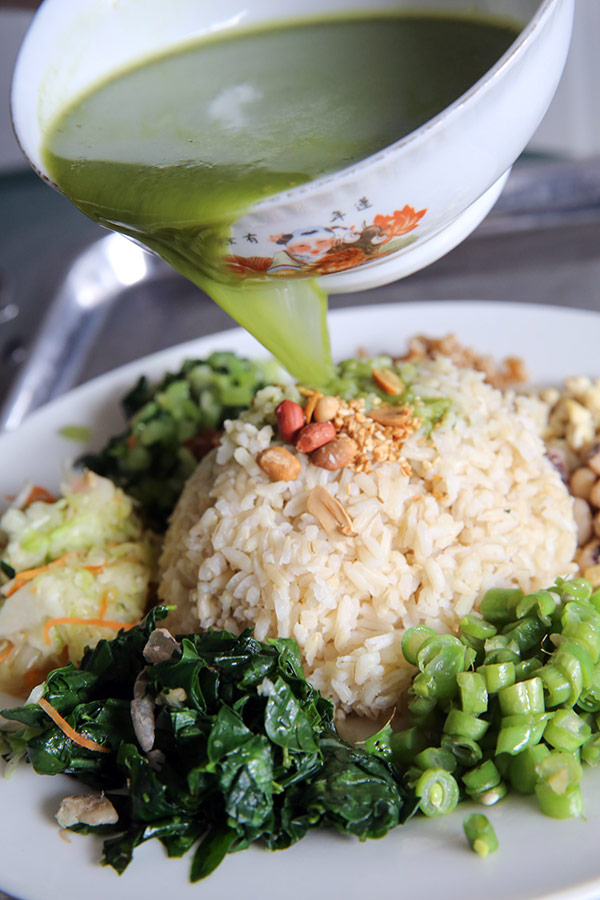 Mix it all with an aromatic green broth made from various herbs like basil and mint leaves. Madam Lee Gnek Meng, 60, has been cooking her popular lui cha dish for the past five years. Originally a volunteer who ran a tuition centre, she decided to join them full time to help with the cooking. 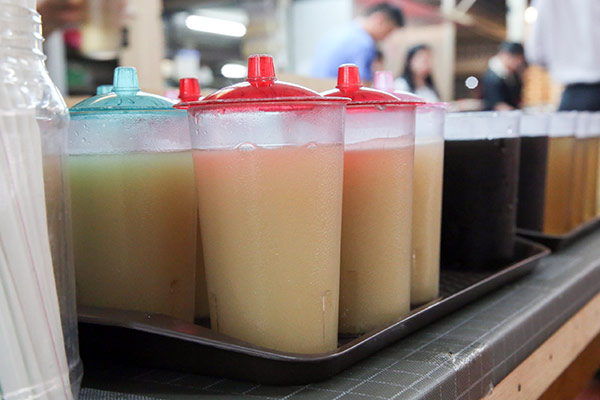 Healthy practices are also conducted here. No white sugar, preservatives or MSG are allowed. Brown sugar is the preferred choice, hence their barley drink is a brownish rather than the usual milk white concoction we get in kopitiams. At the counter, organic grape juice and coconut oil are also sold.

An abundance of fruits is also served here. On the day, we visited it was a bumper harvest of durians, the village variety. The King of Fruits is harvested from the monastery’s own plantations, one in Raub Dharma Realm Mountain and another in Kalumpang Garden. Don’t be surprised if you spot tourists bumping shoulders with you as you queue up to select your lunch. Travellers get directed here from rave reviews on popular travel website TripAdvisor where praises like “great value vegetarian food cooked with love in the centre of Kuala Lumpur” or “in vegan heaven all meals are like this.”

The temple also does good every day, as free breakfast is given out every morning from 7.30am to 9.30am during weekdays. According to Ms Lau, this goodwill means “each vegetarian meal served is one less without meat.” Various items are served on a rotational basis. One of its popular items is nasi lemak on Monday. On other days, there’s porridge and bread, fried meehoon, mee soup with yam cake and fried kway teow with dessert. 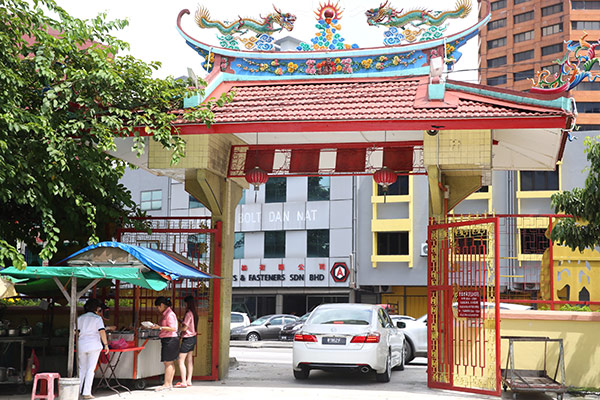 On a smaller scale, you can get your vegetarian fix at a 27-year old stall located within the compound of Kuan Min Kok Buddhist temple along Jalan Ipoh. A woman known as Madam Ooi runs the place with her husband. A constant stream of people pop over here during lunch time since the place offers ample parking within the temple’s grounds. Tables and chairs are set under the sprawling tree that offers shade for those who dine in. Vegetarian food is often labelled as tasteless due to the absence of meat. Since Madam Ooi did not want to resort to using artifical additives like MSG, she prefers to the fiery heat from a cooker fueled by firewood. The breath of wok or “wok hei” produces tastier dishes. Sourcing for firewood is tough, but her husband looks for wooden pallets from factories to be cut down to size for the stove located at the temple. It’s hard work for the husband-and-wife team who start cooking from 7am onwards as the immense heat is often unbearable.

Originally from Penang, Ooi learnt how to cook vegetarian food from her mother-in-law. “She volunteered in a temple at Balik Pulau,” she says. Before she opened this stall, Ooi was a tailor. According to her, one of the monks from the temple asked her to open this stall. 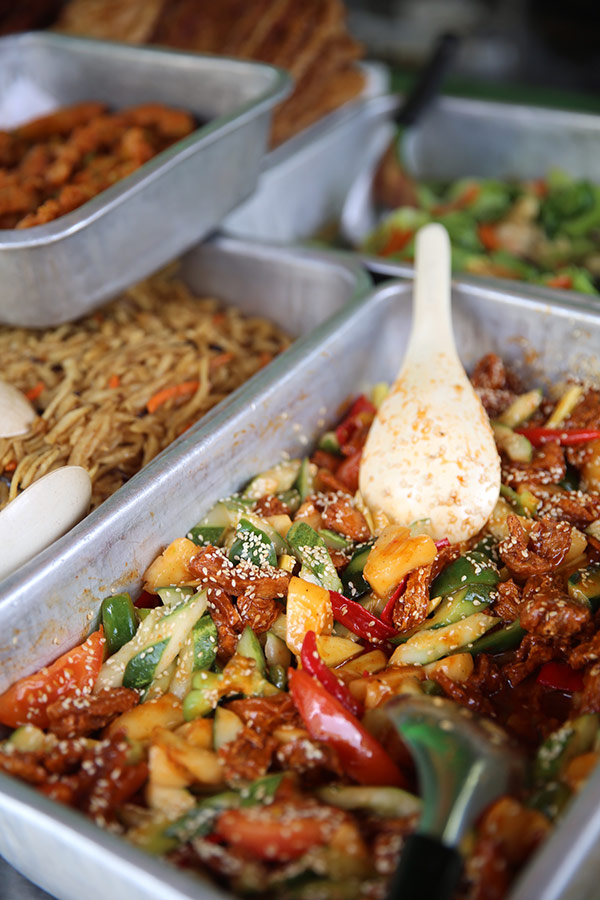 The spread at Jalan Ipoh has rotating daily specials

The testament of their tasty food is the pool of regulars like Raymond Lee, 39, who visits the place almost every week. Originally working at the shophouses nearby, the part-time photographer still returns here even though his office shifted to Segambut. He prefers eating vegetables since he does not need to deal with pesky bones. Madam Ooi cooks up a vegetarian spread of about 15 varieties including her all-time bestseller, curry vegetables. She does daily specials, rotating items like cauliflower, yam or bittergourd that is deep fried. You can also pick up vegetarian rice dumplings filled with soybeans, chestnuts and shiitake mushrooms for an easy-to-go meal.

This story was first published in Crave in the print edition of The Malay Mail on December 6, 2013.