Cool and refreshing, this tangy tomato ‘zaru soba’ is the perfect dish to kick off your summer

Cool and refreshing, this tangy tomato 'zaru soba' is the perfect dish to kick off your summer.
Follow us on Instagram, subscribe to our Telegram channel and browser alerts for the latest news you need to know.
By Kenny Mah KUALA LUMPUR, May 28 — When we live so close to the equator, it can feel like summer all year round.

Yet, as tentpole movies such as Doctor Strange in the Multiverse of Madness and Top Gun: Maverick are being released, it does feel like summer has finally arrived.

With the changing of seasons (in our cinemas, at least, and in more temperate climates), it’s time to whip up some summer favourites. After cooking soba, cool the noodles immediately in iced water.

Whether it’s a simple raspberry and Brie salad or glasses of sparkling water chilled by minty ginger and lemon ice cubes, we’re seeking something cool and refreshing.

This is where zaru soba or chilled soba noodles can be a nifty little addition to your summer menu.

In Japan, where summer can be incredibly humid and prone to heatwaves, there’s nothing like a rolled up mound of chilled buckwheat noodles served on a bamboo strainer (or zaru, hence the name). You can’t have zaru soba without the accompanying tsuyu (dipping sauce). Tsuyu is usually a blend of dashi (the ubiquitous Japanese broth made from kelp and shavings of fermented skipjack tuna), soy sauce, and mirin (a sweet rice wine similar to sake).

While bottles of tsuyu concentrate are available from supermarkets, needing only some cold water to dilute to the right consistency, the dipping sauce — as with many dishes — tastes better when you make it fresh yourself.

Here’s where we can take things up a notch by including an atypical ingredient: fresh, ripe tomatoes. Or rather, fresh, ripe tomatoes that have been frozen.

Freezing a tomato not only intensifies its flavour but also creates a fruity "granita” to add to your tsuyu. Not only will your dipping sauce gain a tangy dimension, the tomato "granita” makes it even colder.

Just like tsukemen, we dip the noodles into the sauce before eating. Cool and refreshing, this tomato zaru soba is the perfect dish to kick off your summer.

A well stocked pantry will make this recipe a breeze. Freeze a couple of fresh tomatoes to create an unusual dip for the noodles.

Rather than making dashi from scratch, for instance, you can easily make the umami-rich Japanese broth from powdered granules these days. Just add water to the dashi powder to make instant dashi.

Cutting down the number of ingredients also helps. I’m omitting the mirin typically used for making the tsuyu as I want the dipping sauce to be truly tangy with the taste of the tomatoes and the yuzu from the flavoured soy sauce.

If you’re adding the rice wine, however, just simmer it together with the dashi and soy sauce till the alcohol is boiled away, before chilling in the fridge.

Other pantry staples you will need include toppings such as kimjaban (seasoned seaweed flakes), ebiko (shrimp roe) and white sesame seeds. Grating the frozen tomato to get tomato 'granita.'

Kimjaban is a Korean ingredient rather than Japanese; it’s a textural wonder packed full of flavour. The roasted seaweed flakes are often sprinkled with powdered soybean and sesame seeds; these contribute a lovely nutty note to balance the brininess.

Using ebiko (shrimp roe) means adding a vibrant pop of colour. That bright orange-red just whets one’s appetite. You may substitute this with tobiko (flying fish roe) or even the larger-sized ikura (salmon roe) but ebiko is typically the most wallet-friendly option.

Combine the dashi broth, yuzu flavoured soy sauce and sugar in a mixing bowl. Stir well till the sugar has dissolved in the liquid. Cover and allow this tsuyu sauce to chill in the fridge for at least an hour. 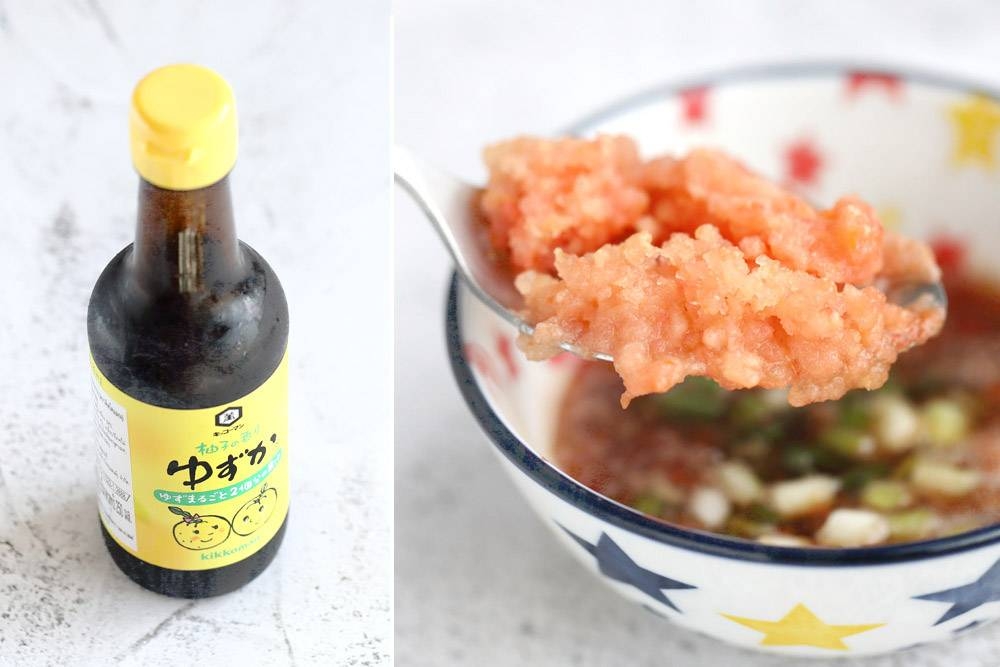 Bring a large pot of water to a boil. Once the water has come to a rolling boil, add the dried soba noodles, making sure to stir continuously. Cook for about 4 minutes (or according to the instructions on the package).

Strain the soba immediately. Transfer the noodles to a bowl of iced water to chill and firm for about two minutes before straining again.

Place soba on a large plate. Top with kimjaban followed by the ebiko. Garnish with a sprinkling of white sesame seeds. Just like 'tsukemen', dip the noodles into the sauce before eating.

Grate the frozen tomatoes until you have a few spoonfuls of "tomato” granita. Add these to the bowl of chilled tsuyu sauce. You may also add some sliced green onion, if desired.

Serve the zaru soba with the tsuyu sauce on the side, for dipping.

From chewy 'pan mee' to old-school Hainanese chicken chop, this Serdang kopitiam brings back the flavours of yesteryear