East meets West: How to make a Hong Kong-style French toast with a ‘golden berry’ twist

KUALA LUMPUR, May 22 — Tough times call for comfort food and self care. What better way to care for oneself than with familiar flavours from one’s childhood?

Sheltering in place has meant I am spending more time in my kitchen. While perusing my pantry, I realised I had a surplus of eggs. It reminded me of what my mother used to do when there were too many eggs at home.

No, it wasn’t making an omelette. Instead, as a special treat, she’d make French toast for us. Not the French toast we associate with brunch cafés, with fans of thinly sliced fruit and dollops of whipped cream.

It was something simpler, more fitting her frugal nature (a trait I realise I’m displaying the older I get). An eggier French toast, with crispy, almost tempura-like edges.

My family didn’t drink fresh milk so there was none at home. No cream either, of course. This was a more basic take that eschews making a custard.

One that feels more right, to me at least. It’s remarkably similar to what you get in a Hong Kong cha chaan teng but it always tasted of Malacca to me, and not some distant city.

Dig in while your ‘golden berry’ French toast is hot!

Of course, now that I am older, I can’t help but fuss with the recipe a little. I doubt my French toast will be as good as my mother’s version but a little twist helps to bring more of me, more of my own life experiences, to it.

Readers with good memories or those who pay close attention might notice I incorporate berry compote in a lot of my recipes. For one, it’s always good to make a large batch and go through it briskly, using every spoonful in a creative way.

A homemade berry compote is delicious spread on bread (of course!) or as topping for granola. Cereal and smoothie bowls. A very berry flower power tea, even.

But mostly because I have a lot of berry compote at home and need to figure out how else to enjoy it. The frugal approach to one’s pantry can offer up riches, if one looks hard enough.

Ripe strawberries for your berry compote; you may use any berries you have in your pantry.

Sometimes that can be as simple as adding one extra ingredient, a new element to liven up what you’re slowly getting bored of. A square of full cream, unsalted butter in this case.

Rather than using corn syrup that professional kitchens employ, a generous pat of rich butter can also add a lovely shine to your berry compote especially if you thin it out with a little water to create a decadent sauce.

Pantry magic is merely using whatever we have handy, you see.

My version of the Hong Kong-style French toast here uses three standard sized slices of bread, the sort we’d normally get when we buy a loaf from our neighbourhood bakery. 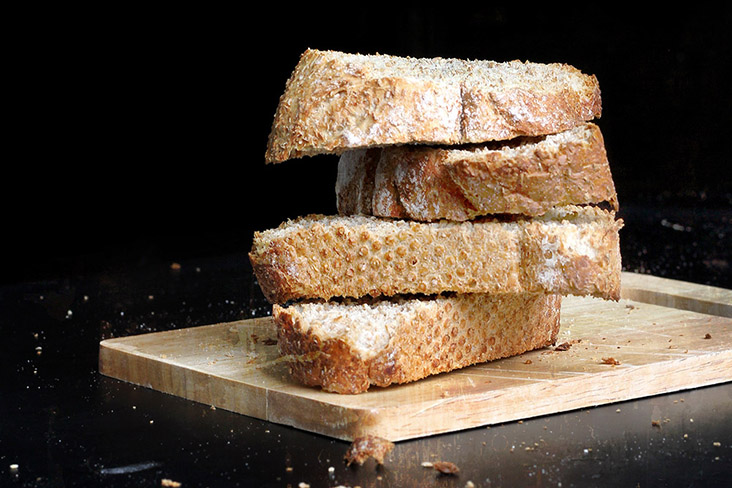 Transform sliced bread into a sandwich with a difference.

If you prefer to slice your bread at home (and have a trusty — not rusty! — bread knife), then by all means cut two thicker slices (just like the sort a bona fide Hong Kong cha chaan teng would use) instead.

In such a scenario, you might be tempted to layer twice the amount of peanut butter between these two larger slices but a word of advice: go easy. Too much peanut butter and the excess might just spill out during frying. Burnt bits of melted peanut butter do not a good French toast make.

A filling of peanut butter is what differentiates Hong Kong-style French toast with its Western counterpart.

For the bread, opt for softer, fluffier breads such as milk bread or brioche. The Hokkaido-style milk loaf is especially good when you’re going the thick cut route. But honestly? Even sourdough or a whole grain bread would taste good, albeit coarser in texture.

When plating, Hong Kong-style French toast is typically topped with a cube of butter or copious amounts of condensed milk. Given that there is already butter incorporated in the golden berry sauce, I’m omitting further dairy for the toast else we’d really be gilding the lily here.

To make the golden berry sauce, first melt butter in a pan over medium heat. Once the butter has melted, stir in the berry compote and a little water (to thin out the compote into your desired consistency for the sauce) until everything is well combined. Remove from heat and set aside. 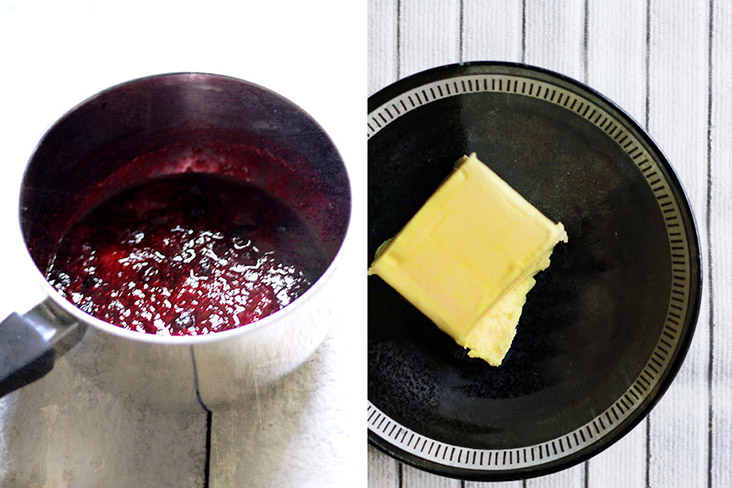 Spread a decent amount of peanut butter on two slices of bread. Sandwich these together with the third slice in the middle. To create a sharp square shape, slice off the crusts from all four sides.

In a shallow dish, whisk eggs together with the sugar until the sugar has dissolved. Lightly soak your sandwich in the egg mixture. Just a few seconds; you don’t want the sandwich to get soggy and the soft bread to fall apart. Make sure every side is coated.

All you need are some fresh eggs to make an eggier French toast.

Heat the cooking oil in a saucepan over a medium-low fire. You’re going for a shallow fry so not too much oil.

Remove from the pan. Place the French toast on some paper towels to absorb any excess oil before plating. Spoon the golden berry sauce over the toast and serve immediately.