Make southern Thai massaman curry... and get memories you can always savour

KUALA LUMPUR, May 15 — On rainy evenings (which has been the pattern of late), there’s nothing more comforting than a bowl of Thai massaman curry, full of spices and nutty notes.

Eaten with hot and fluffy steamed white rice, I’m immediately taken back to Phuket where I first had this dish many years ago. The white, sandy beaches; the friendly locals; the flavoursome massaman curry.

Okay, let’s get real. Back then I was less enamoured with the beaches; those were crammed full of tourists, most of them Westerners rather than locals. Those friendly locals were hard to spot, not unless they were hawking souvenirs to gullible tourists.

But the massaman curry? Now that’s a memory I could savour.

Years later, I even learned how to make it at a Thai cooking school. It wasn’t a matter of dumping all the ingredients into a pot and heating it up. There were so many steps and stages.

First we had to make the massaman curry paste (or namphrik kaeng matsaman in Thai) from scratch. No food processors, please. Only a pestle and mortar... and plenty of elbow grease. 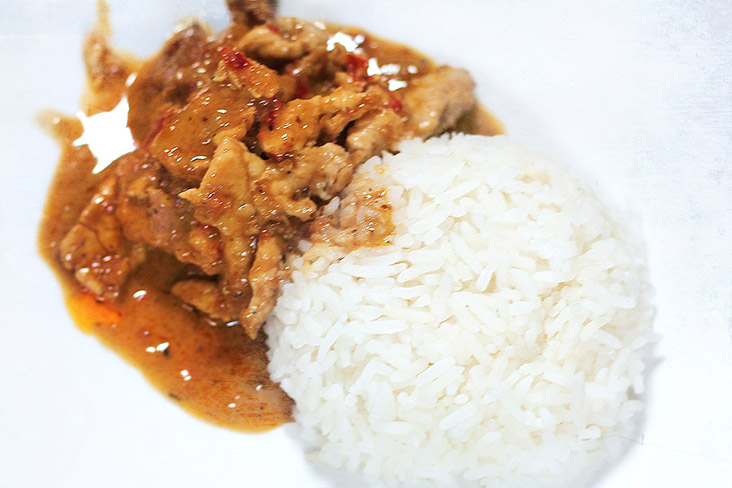 Lots of sweating and stirring, pounding and pontificating as we shared opinions about everything from the weather to the wisdom of using modern technology (i.e. a food processor). When would we get to making the actual massaman chicken curry (kaeng matsaman gai)?

In the end, we learned that everything worth having requires time and effort.

So take a break from your work and your worries. Relax with the loving labour of the kitchen. Make some massaman curry and some memories you can always savour.

A few notes on preparing the ingredients: You’d observe that most of the curry paste ingredients require roasting, which allows their smoky and nutty aromas to be released.

Slicing the dried red chillies before roasting increases surface area and speeds up cooking time. Some ingredients require direct roasting over a small flame, similar to how I charred the onions and ginger for my pho recipe. There are two ways to roast the raw peanuts. First is by baking them in an oven. Alternatively, do a dry stir-fry in a wok over medium to medium high heat. I have outlined both methods in my recipe for fa sang wu (what we call peanut cream in Cantonese).

There are variations on the spices used. Cardamom and cinnamon, cloves and cumin: all are common. Some versions even include star anise, nutmeg and mace.

Thai shrimp paste or gapi is typically made of fermented shrimp (or a mixture of shrimp and small fish). You can find this at Thai specialty grocers in some neighbourhoods but you may replace this with local belacan if you can’t find gapi.

Rather than using a food processor, which admittedly is faster and less labour intensive, do opt for a pestle and mortar. The pounding action crushes the fibres of the ingredients, releasing more of their aromatic oils.

The reason we do this is so we can first emulsify the curry paste in coconut cream which has a higher fat content. The coconut milk is used later in the cooking process to thin out the curry to the consistency we desire.

We will be roasting or toasting the ingredients for the curry paste in stages: beginning with the alliums (garlic and shallots), then the dried chillies and fresh ingredients, and lastly the dried spices.

First roast the garlic and shallots, whole and unpeeled. The easiest way to do this at home is directly on a grill pan or grilling right over the stove top while using a low flame. Look for an even char on all sides.

Once well roasted, which takes about five minutes, remove from the heat and set aside. When reasonably cool, peel the skins from the garlic and shallots.

Next dry roast the dried red chillies, lemongrass, galangal and coriander root in a pan over low heat. Keep roasting them until they release their fragrance, then remove and set aside. 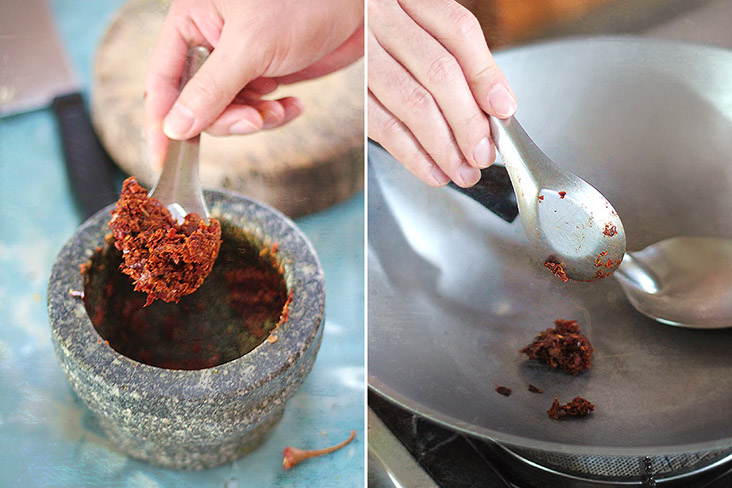 After pounding in a mortar, sauté the massaman curry paste briefly until aromatic.

Finally, toast the dried spices (coriander seeds, cumin, peppercorns, cloves and cardamom pods) in a dry pan over low heat. Once the spices release their aroma, remove from the heat and set aside to cool.

Add the dried ingredients to the mortar and pound until they become a coarse powder. Next add all remaining ingredients, including the shrimp paste and salt. Continue pounding until a fine paste has formed.

Use immediately or store in an airtight container in the fridge for up to a month.

Heat the oil in a large wok over medium heat. Add the curry paste and sauté briefly until aromatic.

Next add the chicken and coconut cream, stirring briskly so that the curry paste emulsifies with the cream while seasoning every piece of chicken. 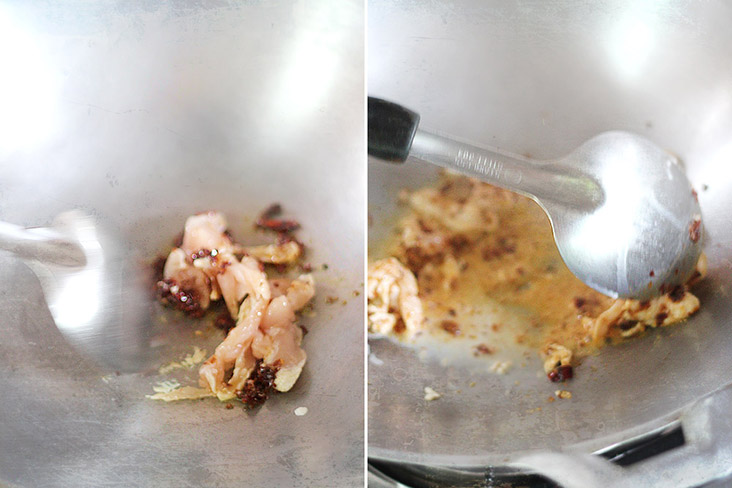 Stir fry the chicken and coconut cream with the curry paste so that everything emulsifies. 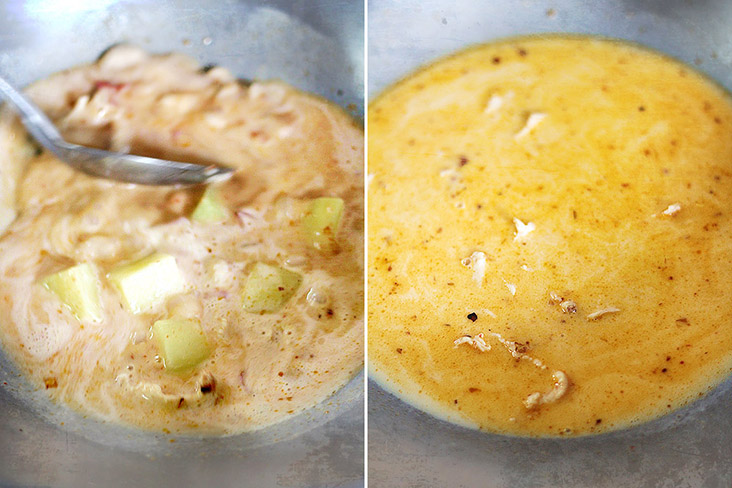 Once the chicken is about three quarters cooked, add the roasted peanuts, parboiled potato, onion and coconut milk.

As the mixture comes to a gentle boil, season with palm sugar, fish sauce and tamarind juice. Lastly add the toasted cardamom pods and cinnamon. 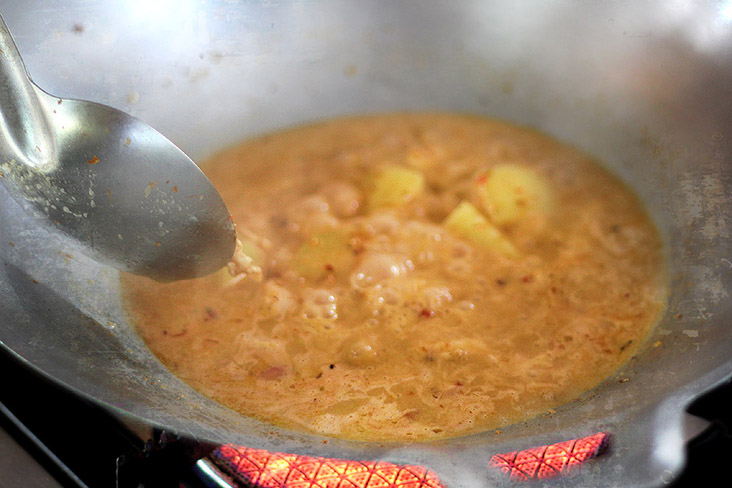 Allow the curry to come to a gentle boil before seasoning.

Bring to a boil. Reduce heat to low and simmer until the curry thickens. Serve hot with steamed white rice.