An aerial view shows smoke rising from damaged residential buildings following an explosion, amid Russia’s invasion of Ukraine, in Mariupol, Ukraine March 14, 2022. — Picture from social media/ Azov regiment press service/via Reuters
Follow us on Instagram, subscribe to our Telegram channel and browser alerts for the latest news you need to know.

“We have already informed the Russian side about it,” she said, demanding Moscow instead open humanitarian corridors to allow an estimated 350,000 people still trapped in the city to leave.

Russia’s Ministry of Defence had earlier said Ukraine had until 5am on March 21 to respond to Russian proposals, warning that more than a “court martial” awaits those who do not surrender.

“We call on units of the Armed Forces of Ukraine, territorial defence battalions, foreign mercenaries to stop hostilities, lay down their arms” said the head of the Russian National Defence Control Centre Mikhail Mizintsev.

The southern port city of Mariupol is a pivotal target in Vladimir Putin’s war in Ukraine — providing a land bridge between Russian forces in Crimea to the southwest and Russian-controlled territory to the north and east.

The city has been under heavy bombardment from surrounding Russian forces since the start of the invasion on February 24.

A Greek diplomat who remained in Mariupol during some of the bombardment said the destruction there would rank alongside history’s most ruinous wartime assaults.

“Mariupol will be included in a list of cities in the world that were completely destroyed by the war, such as Guernica, Stalingrad, Grozny, Aleppo,” Manolis Androulakis said after flying back to Athens.

The UN has described the humanitarian situation in the city as “extremely dire” with “residents facing a critical and potentially fatal shortage of food, water and medicines”. 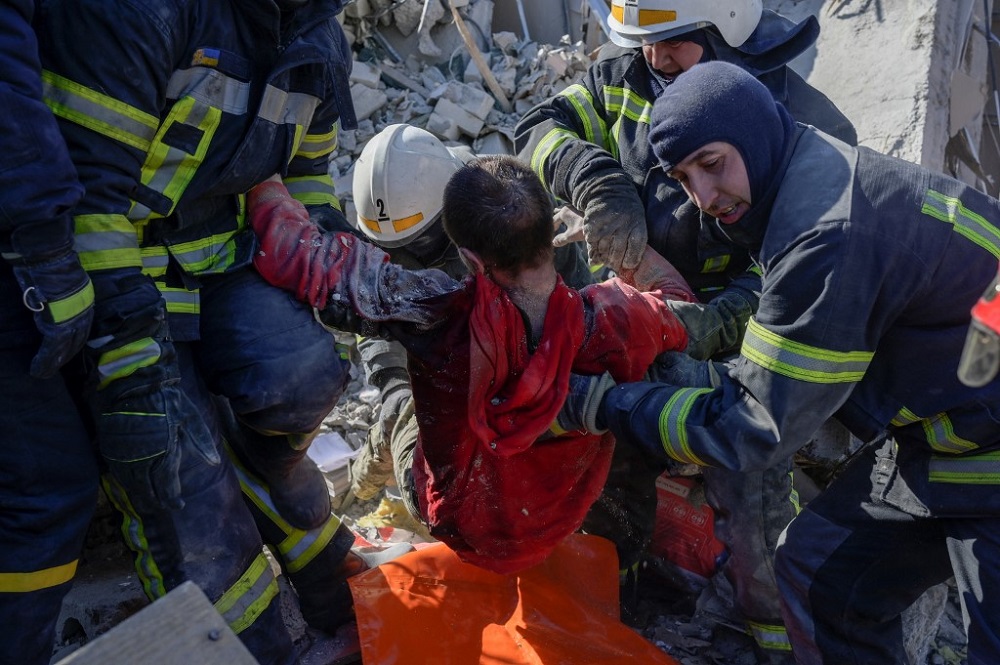 In his latest video address Ukrainian President Volodymyr Zelensky accused Russia of bombarding a Mariupol school sheltering hundreds, calling it an act of “terror that will be remembered even in the next century”.

“Russian forces have come to exterminate us, to kill us,” he said.

It was the latest potentially devastating strike on a shelter for civilians. Last Wednesday, a theatre where authorities said more than 1,000 people had sheltered was hit, with hundreds still presumed missing in the rubble.

Mariupol officials have said occupying forces have forcibly transported around a thousand residents to Russia and stripped them of their Ukrainian passports — a possible war crime.

A group of children stuck in a Mariupol clinic for weeks are among those who have been taken to Russian-controlled territory, a carer and a relative of a clinic worker told AFP.

The 19 children, aged between four and 17 and mostly orphans, had been living in freezing cellars hiding from shelling in harrowing conditions.

As Russian bombing continued across the country, Zelensky again suggested that he and Russian counterpart Vladimir Putin hold direct talks.

After addressing Israeli lawmakers Zelensky — who is accused by Russia of being a Nazi, but is Jewish — thanked Prime Minister Naftali Bennett for efforts to broker talks, which he suggested could take place in Jerusalem.

“Sooner or later we could start the conversation with Russia. Perhaps in Jerusalem. This is the right place for finding peace. If this is possible,” Zelensky said.

Authorities in Turkey, where Russian and Ukrainian representatives have been negotiating, said the two sides were close to a deal to stop the fighting.

But the Ukrainian leader appeared to draw some red lines.

“You cannot just demand from Ukraine to recognise some territories as independent republics,” he told CNN. “We have to come up with a model where Ukraine will not lose its sovereignty.”

The conflict has sparked a refugee crisis of historic proportions, wreaked havoc on the global economy and drawn fierce denunciations from much of the world.

China’s ambassador to the US yesterday denied that his country was sending weapons to Russia for the war, days after US President Joe Biden warned Beijing not to do so.

“What China is doing is sending food, medicine, sleeping bags and baby formula, not weapons and ammunition,” Ambassador Qin Gang told CBS, while making no promises about the future. 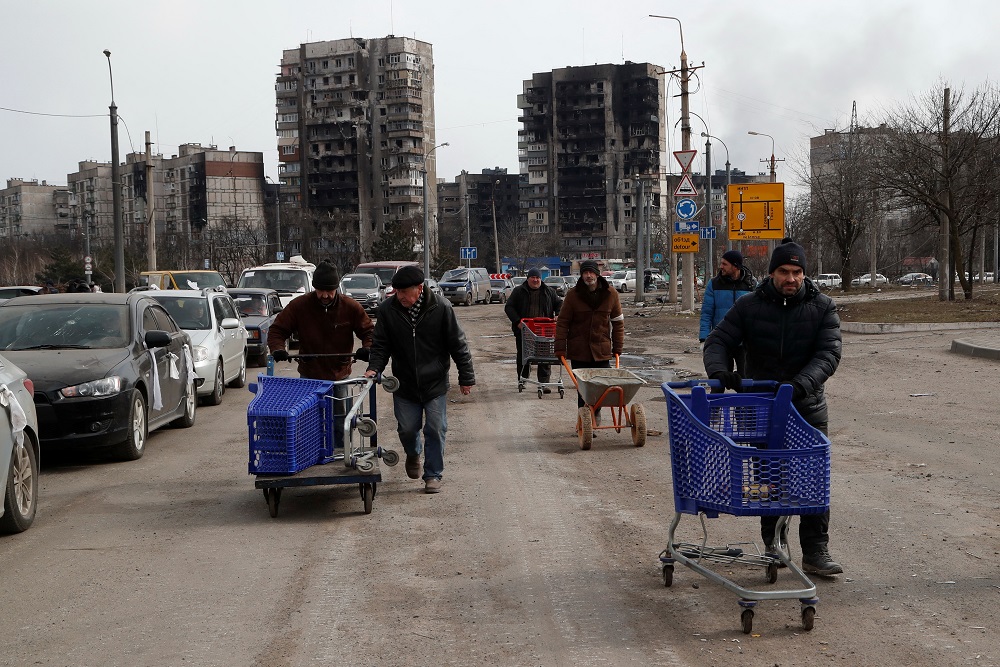 People walk near blocks of flats, which were destroyed during Ukraine-Russia conflict in the besieged southern port city of Mariupol, Ukraine March 17, 2022. — Reuters pic

As the war has ground on, Russian forces — stymied by unexpectedly fierce Ukrainian resistance, and reportedly facing shortages of weapons and supplies — have made increasing use of long-range missiles.

A day earlier, Russia said it had used the sophisticated weapon to destroy an arms depot near Ukraine’s border with Romania.

The Pentagon, however, played down the claim.

In Kyiv, where Russian forces are trying to encircle the capital, a shell exploded outside a ten-storey apartment block, injuring five people.

At least one person was killed when a shopping centre in the city’s northwestern Podilsky district was bombed.

In Chernigiv, which is already encircled, Mayor Vladislav Atroshenko said yesterday that dozens of civilians had been killed after shelling hit a hospital.

Humanitarian conditions continued to deteriorate in the mostly Russian-speaking south and east, where Russian forces have been pressing their advance, as well as in the north around Kyiv.

They are fleeing fighting that, according to Zelensky, has left around 14,000 Russian servicemen dead, a number that “will only continue to rise”.

Russia has provided no death toll since early March, when it said nearly 500 servicemen had been killed. Ukrainian officials said on March 12 that some 1,300 Ukrainian troops had died.

Ukraine has not been providing a civilian toll, except for children, saying at least 115 have now perished. 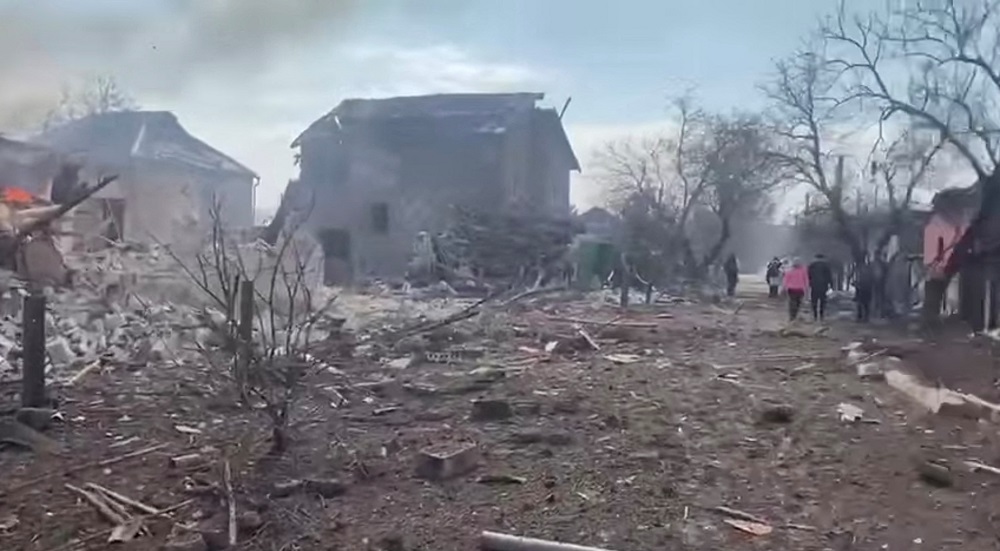 The aftermath of Russian artillery shelling on a residential area where a rocket hit a house in Mariupol, Ukraine, seen in this screengrab from a video uploaded on social media on March 10, 2022. ― Armed Forces of Ukraine/Handout via Reuters

Russia’s war has sparked an unprecedented wave of Western sanctions against Putin, his entourage and Russian companies.

France said yesterday it had seized €850 million (RM3.94 billion) of Russian oligarchs’ assets on its soil.

The war has sparked turmoil for an already vulnerable world economy. Russia is a major exporter of oil, gas and commodities, while Ukraine is a major supplier of wheat.

“Even if the war stopped today, the consequences of this conflict would be felt for months to come,” Beata Javorcik said. — AFP