JANUARY 11 ― Recurring villains have been the main reason behind the latest Spiderman movie success. To date, it has become the first Hollywood movie to earn US$1billion (RM4.19 billion) during the pandemic area.

Such feat is amazing considering the fact that it is not even released in China’s cinema market. Yet.

This formula has seen recent success in Hollywood and do not expect it to go away anytime soon in the future superhero flick.

Malaysian football has many past and present villains. Just like in the movie, the same villains keep on reappearing, though the ones which we hardly missed. This time on the background of recently concluded AFF Championship 2020.

First, the recurrence of inept decision made by FAM. The tournament’s organiser had allowed every participating country to bring 30 players, but FAM had decided to bring 24 players, six short of what is being permitted.

This act of hara-kiri baffled many fans as any outbreak of Covid-19 in the team during this pandemic era will totally disrupt the national team preparation.

As luck or rather misfortune would have it, an outbreak did happen. Coupled with some injuries, Tan Cheng Hoe was left with only 18 players fit for selection during match day.

The good news was it happened during the later part of the group stage. However, the bad news was our opponents for the later part were Indonesia and Vietnam which are Asean football powerhouse.

Some of the young players did not have enough international experience to play against the big guns.

Thus, new players were called up to reinforce the depleted squad.

This seemingly preferential treatment did not escape the ire of other national team coaches, especially Park Hang Seo from Vietnam, who lambasted the organizer for allowing it to happen and said we should own our mistake.

Nevertheless, the additional recruitment did not help much apart from increasing the number of players available for selection. Our team were comfortably beaten by Indonesia and Vietnam.

Secondly, poor scheduling of local football hampered our national team preparation. Our first match in the AFF Championship was held on 5th December, merely 5 days after the final of Piala Malaysia which concluded our local football calendar.

This short amount of time of get-togetherness was probably only for that ie. to get together.

Proper training takes time, and there was barely any left for the manager to infuse tactical nous of his gameplan to the player.

FAM may argue that the postponement of the tournament (twice!) affects its own scheduling effort, but we do know that this is somehow amenable.

Or perhaps FAM had other priority. Asian Cup qualifier will take place in June this year and offer a more lucrative spot in the international football scene. Was FAM serious in putting the team for AFF Championship? We never know.

As the saying goes, “hendak seribu daya, tak hendak seribu dalih” Next, come the question of naturalised players. FAM has been practicing the policy since the past decade hoping that their physical attribute will add some quality into the national team.

In this campaign, their performance has been generally disappointing if not poor. I still remember in 2010, the year we first time won the AFF Championship, there was not a single naturalised player in the national squad.

Heck, even the top scorer of the tournament was a lad born in Kajang, Malaysia.

Our top neighbouring teams were able put on an energetic, mouth-watering display this time without having to rely on naturalised players

This raises the question of whether the policy of employing naturalised players by FAM does improve or worsen the state of our national football team. 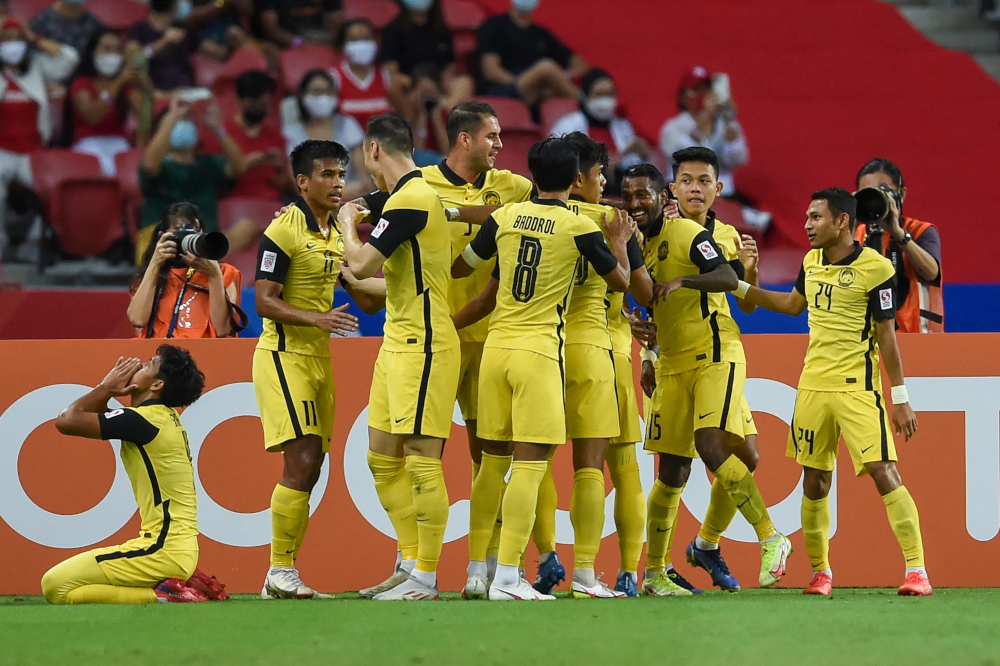 Malaysia’s Kogileswaran Raj Mohana Raj (3rd right) celebrates with teammates after scoring a goal during the AFF Suzuki Cup 2020 Group B football match between Malaysia and Indonesia at the National Stadium in Singapore, December 19, 2021. — AFP pic

One can say pointing finger is easy, but FAM as a national body entrusted to handle our country football affair must quickly learn from recent mistakes.

Millions have been spent over the past decades and we still see little in return.

Other sports such as hockey and rugby have earned reputable international status and are gaining more support from local.

Maybe it is time that we look at other options as a source of national pride?

Just like in the movie, avid Marvel fans will usually stay glued to the screen until the end for postcredit scene hoping to catch a glimpse of what is going to happen next.

Today we, the football fan, rarely stay until the end of any campaign because we know the ending is somehow as expected.

Football is not coming home.