Needs-based policies regardless of race, not driven by identity politics — Sofea Azahar

APRIL 5 — While efforts are taking place to mitigate the heavy impact of the health crisis caused by the unprecedented pandemic through the national immunisation programme and government stimulus packages, the emergence of identity politics appears to be accelerating in the country when the opposite is supposed to take place in the midst of times like this — unity of Malaysians regardless of social status, race and religion.

Without the sense of unity and national spirit, it would then translate into race-based policies rather than needs-based and given the current demographics and overall socioeconomic conditions since the crisis, the latter should be given the attention.

Anecdotally, identity politics that has shaped people’s minds and behaviours in public or through social media is seen as one huge factor resulting in the racial polarisation that we witness in Malaysia and it has certainly been growing by day.

Even in recent years, politicians have been playing mind games more frequently especially during election campaigns in order to gather voters’ support with racist comments so as to scare the voters that their rights will be lost if such political figures/elites are not chosen, and the list goes on.

When identity politics exist, race-based policies is very likely. But the question is, are such policies appropriate or fair as they focus on a specific race rather than being inclusive for all which is needed in a multiracial country such as Malaysia?

This comes to the point made by the advisor to the former Prime Minister, Tun Daim Zainuddin previously, that economic policies have to be needs-based, not race-based which was also mooted by some other political figures.

He said, “Although Bumiputeras (“sons of the soil,” a term Malaysia uses to describe its indigenous population, made up mostly of Malays) are indeed disproportionately represented among the poor, other races too are deeply affected by poverty and low standards of living. Policy-wise, the B40, irrespective of race, must be given priority.”

Ironically, it was during the long reign of Tun Dr Mahathir Mohamad and his Finance Minister Tun Daim that we saw the policy thrust directed to making the already well-to-do Bumiputeras who were relatively a minority compared to the poor majority of the Bumiputera wealthier still via cronyism.

Hence, even if we have to put in place a race-based policy via affirmative action to correct any imbalance, that policy must be subservient to a needs-based policy in the sense that as far as the Bumiputera is concerned, policies should be enunciated to uplift the poor Bumiputeras rather than the Bumiputeras who are already well off.

If we go back to the history of the New Economic Policy (NEP), it was not meant to be race-based according to an economist who was part of the design of the NEP, Ramon Navaratnam.

The idea of NEP was announced by the late Tun Abdul Razak Hussein in 1970 and began in 1971 after the racial riots on May 13, 1969 due to socioeconomic imbalances within the Malaysian society of different races.

It was introduced to achieve national unity through two main prongs – to eradicate poverty regardless of race and to restructure society in order to eliminate the identification of race with economic function.

Policies of the NEP were inclined towards the Bumiputera or more specifically pro-Malay who accounts for the largest share of the population and those who were in the poor segment of the society relatively to the Chinese and Indians who dominated the working class, i.e. smallholder farmers and fishermen.

When it comes to poverty, it can be observed that the NEP was effective in reducing the poverty rate significantly for all races (chart below). 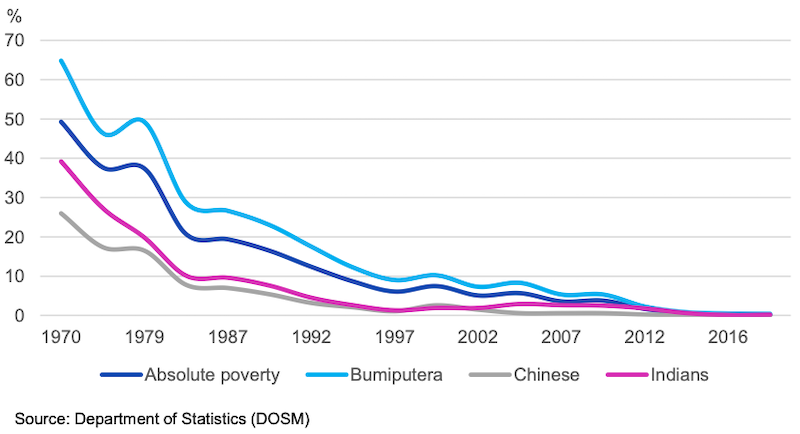 Additionally, NEP’s main restructuring target was to raise Bumiputera share of corporate stock ownership from very low 1.5 per cent in 1969 to 30 per cent in 1990. Statistics have shown progress whereby the share has risen from about 18 per cent in 1990 to slightly above 20 per cent in 2000.

So, we can see that there are positive developments for the targeted groups since the beginning of NEP. Nevertheless, it has been said that the race-based policies have continued until this day.

The NEP has been associated to being one of the contributing factors leading to the polarisation that we see now although it was meant to be needs-based back then, according to an honorary research associate at the Asia Research Institute of the University of Nottingham Malaysia Bridget Welsh.

It is undeniable that the majority of the population is Malay and the low-income group can be said to mainly include the Malays (mean monthly gross income of household, refer to chart below) but if it is up to purely race-based policies and race-based politics, is it fair to let those who are undeserving or privileged enough get the benefits too? 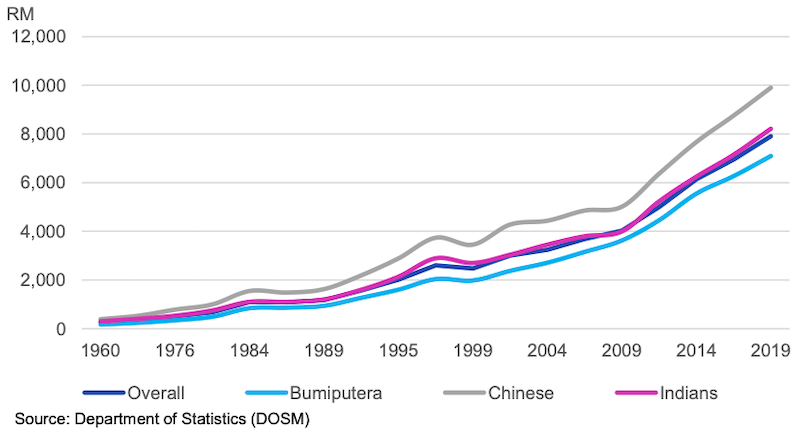 They too contribute to the economic growth of Malaysia and they too need all the help that the government of the day can offer.

Hence, for the purpose of appropriate, fair and effective policy formulation, accurate data reflecting the ground reality is unquestionably needed to prevent further racial polarisation in the country.

It must not be because you’re a Malay or a Chinese or an Indian, and certainly not because you have the money or power to get through the system.

*Sofea Azahar is Research Analyst at EMIR Research, a think tank focused on strategic policy recommendations based on rigorous research.