PETALING JAYA, June 13 — Malaysia model, actress and TV host Amelia Thripura Henderson is still be basking in her win as Model of the Year for Malaysia at the 2019 Asia Model Festival in Seoul, South Korea earlier this week.

Her celebration of the recognition uploaded on Instagram with a caption that read, "never forget where you come from 🇲🇾” was, however, cut short by comments that she was undeserving because she is not Malaysian.

never forget where you come from 🇲🇾 thank you @asiamodelfestival for the award ❤️ (without a doubt the best part of this video is @amberchia at the end 😘) _________ wearing : @glamedge.co

IThe stunning 23-year-old who hails from Klang, Selangor is of Sri Lankan and Scottish parentage. She was taken aback when among over 1,300 comments, which included congratulatory messages from local celebrities, were two that claimed she is not Malaysian.

The first by the user mesh_dola28 stated, “You’re not Malay, the Malaysian people should stand up to foreigners like you.

“So you may be pretty, but you don’t represent Malay people.”

The comment also read, “Maybe some high echelons people is paying you to say this for social engineering. Put it this way... YOU ARE NOT MALAY.”

The beauty with brains, who is a member of Mensa International with a certified IQ of 180, replied both with the same lengthy answer of her origins and added, “Malaysia is my country just as much as it is yours and nothing makes me more proud and honoured to represent my home.”

On Twitter, she not only highlighted both the comments, but also included a screenshot of a now deleted comment by the first person who also replied on the second offending statement, with a derogatory racial slur, saying “Filipino? She’s k*****g”.

imagine having to defend your own citizenship. I never have to reply, but what is the use of having a platform if it’s not used to educate? pic.twitter.com/F2qamX8WXv

more education: using the K word is absolutely unacceptable. It is a racial slur used to demean an entire race, by people who feel like they do not belong in a country they were born into. I am Indian, and proud of it! That would’ve been a better word to use in this context. pic.twitter.com/jCryGoMNIt

“It is a racial slur used to demean an entire race, by people who feel like they do not belong in a country they were born into,” she said. 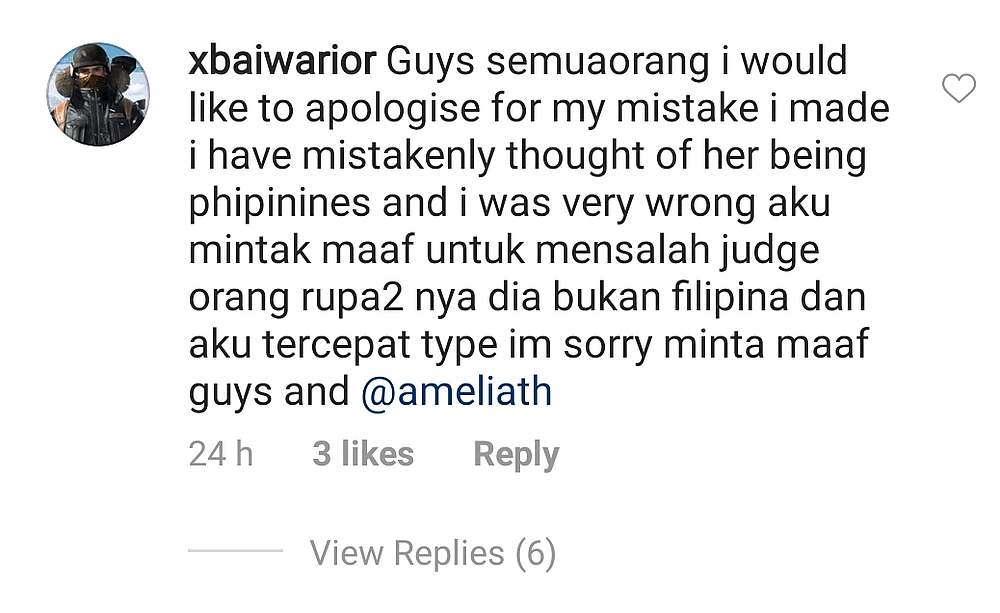 The owner of the second comment meanwhile, later commented once again, apologising for the misunderstanding of thinking Amelia is Filipino.