Monday, 07 Feb 2022 11:37 AM MYT By Alwyn Lau
Follow us on Instagram, subscribe to our Telegram channel and browser alerts for the latest news you need to know.
By Alwyn Lau

FEBRUARY 7 — Very few Chinese folks will say this aloud but during Chinese New Year (CNY), there are some things which will scare the living Tiger lights out of them i.e. the 20 questions relatives ask during gatherings: “Your school results how?” “You director in office already ah?” “When you two getting married?” “How come no children yet?” “Why no sons?”, ad infinitum.

It’d be funny if it didn’t often create either abject horror or horrifying awkwardness among so many CNY celebrants. Festivities are wonderful but I guess being interrogated on some of the personal aspects and decisions in one’s life in the middle of one’s entire clan, could be daunting.

Of course, asking about each other’s lives — especially after having been apart for a year or so — is no doubt a part of what it means to be family.

In the best-case scenarios, it’s not so much “20 Questions” but “20 Ways to Reconnect.”

In fact, it’s not uncommon to have cousins, uncles and aunts proudly pour out their latest achievements, plans and dreams together with the Chinese tea, orange juice and cookies.

Then again, we’d be lying if we said there was zero apprehension about these occasions. Maybe it’s all the cookies and laughing and food and fireworks which make extended family members think the young fellas they haven’t seen in a year will feel perfectly fine being asked questions they’d shun colleagues and block Twitter followers for even raising. 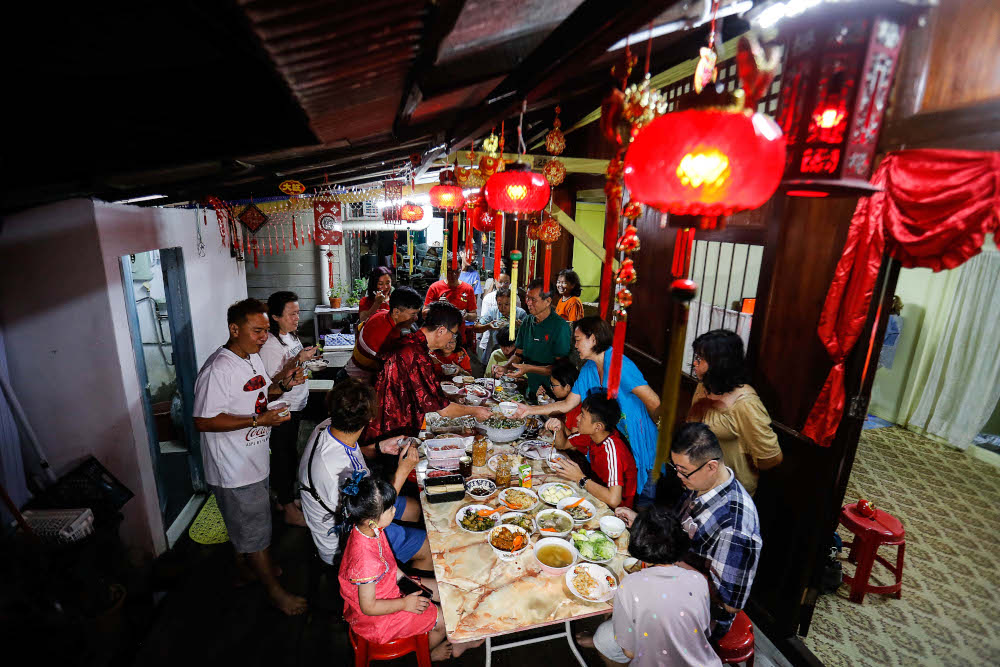 A family having their reunion dinner at Lim Jetty, Weld Quay on January 31, 2022. — Picture by Sayuti Zainudin

Maybe it’s tradition which spreads itself like a red parliament curtain over communities such that every query can be posed without fear of a lawsuit, every intimacy probed with impunity.

And who hasn’t hesitated before proffering a less-than-full-honest or more-than-over-generalised answer?

We say our studies are fine (and throw in how Maths is our favourite subject hoping the questioner hates it), we say maybe we’ll tie the knot in a few years’ time (and joke maybe she or he could have second thoughts), we say we’re too busy to have a kid (just before saying “Oh, hey, YOUR children look wonderful!”), we say this we say that we say anything while simultaneously willing the spotlight to shift away from us.

Ironically one of the surest ways to avoid these awkward “firing squad” moments is to have an actual problem.

No relative will ask a divorcee whether her ex-husband still contacts her. Likewise, only someone ignorant would ask a woman with a failed pregnancy about family plans.

Yet who knows, with social media being what it is, maybe CNY today and tomorrow will see fewer “20 Questions” and more family members simply staring at their phones and mumbling something about Covid-19 or whatever.

The tragedy of Facebook and Twitter is that fewer of us care to speak face to face, which could mean a minor redemption to young couples or adolescents simply hoping to make it past lunchtime without having all their existential decision-making becoming headlines.

Thankfully, most people still care about each other’s feelings to not be unnecessary busy-bodies.

Also, with rising sensitivity and political correctness today I suppose everyone’s more likely to think twice before turning a family gathering into a CSI inquiry.