All set and ready to go

Thursday, 06 Jan 2022 2:47 PM MYT By Player's Blog
Follow us on Instagram, subscribe to our Telegram channel and browser alerts for the latest news you need to know.
By Player's Blog

JANUARY 6 — After last season’s success, my goal is to beat it. My goal is always to do better each year. It’s hard to say because I’ve had such a consistent year (15 top-10s) and had one win, but I can tell you right now I would gladly take a bit more inconsistency and have more than one win. It all depends on how you categorise it. In the sport that we play, it’s hard to only count wins as successes. You can’t just think about a second place as a loss, right? Obviously, the goal in my mind is for me to have a better year.

Being World No. 1 is something you’ve got to earn. I’m No. 1 because of how I have played in the past, so if I want to stay here, I’ve got to keep playing at the level and keep trying to get better. At the end of the day, I can only focus on myself. I will try to improve my game and improve my level of golf. If I can do that and play the way I know I can play, everything else should take care of itself. I’m not thinking constantly of ‘Oh, he’s No. 2 or he’s coming for me or I need to do this or that.’ I’m trying to play the best that I can and hopefully win a tournament. I’m hoping I can have another quality year and win multiple times.

From June of 2020 on, we played a lot of golf and I ended up getting two wins and played really good golf in the majors. And then right away, when everybody has time off, I changed manufacturers and worked harder than I’ve ever worked. I did not want changing clubs to be an excuse, so I did a lot of work and ended up playing great during the year. I was prepared for the first few months to be a bit of a struggle but all the hard work I put in paid off and I started right out of the gate playing great golf and having chances to win. I had my moments with Covid, became a dad, won a US Open, played amazing golf and then played a great Ryder Cup.

However, when the Ryder Cup was over, I was drained from the previous year and a half. I went back to Spain and I just needed a break, not only for me but also for my family. We endured it together and I wanted the time to be a dad and be a husband and just be there for my wife and my son. I’m really glad I did it because since he was born, we had help at night and Kelley had help, but I wasn’t of much help because I was competing and I had to sleep to be able to compete. So as soon as I got back home, I told Kelley I wanted to be more involved, I wanted to help out and for those two months, I really, really, really enjoyed having to wake up a couple times at night and take care of my son. To be able to be there in the morning, feed him, give him a bath at night and just enjoy the simple things of parenthood, knowing that basically once he starts going to school I’m pretty much going to miss 50 per cent of his life. I really wanted to cherish those moments. I know I’m not going to regret any time I decide to spend more time with my family. 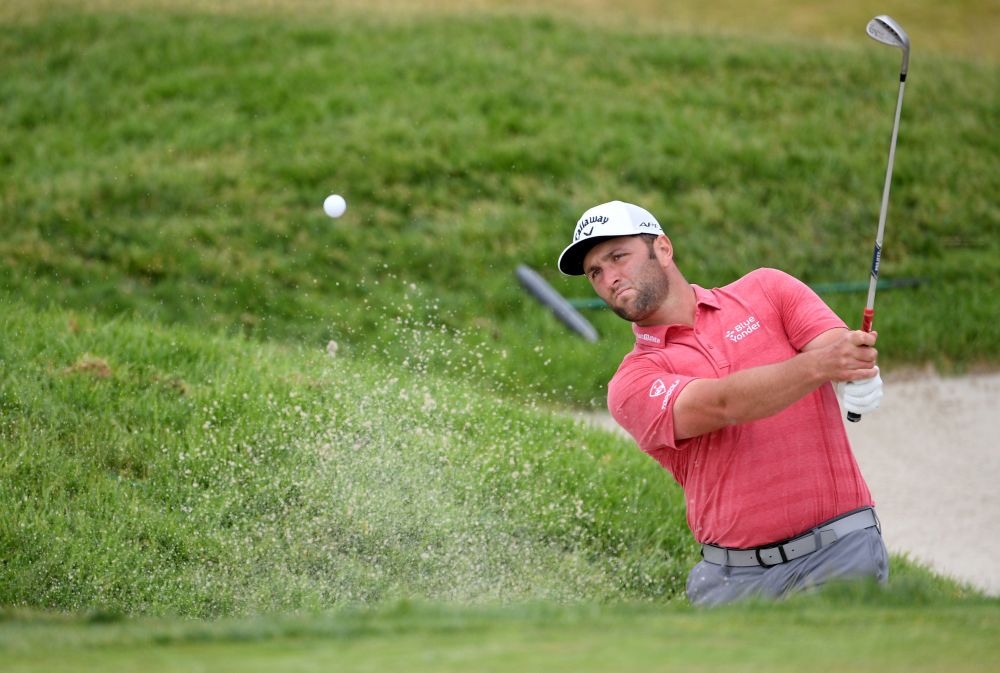 Jon Rahm plays a shot from a bunker on the 11th hole during the final round of the US Open golf tournament at Torrey Pines Golf Course, San Diego June 20, 2021. — Reuters pic

During the first two weeks back home, I was completely off golf. I still went to the gym and worked out just because it’s more of a mental thing. Then I slowly started playing some games with my friends and then practicing. But the first month wasn’t very intense. I’ve now got a new driver and new woods this year that I’m still getting into. It’s a process to get everything approved but I’m really liking it so far. I like the look of it, having a mat-black driver as I’m a very big fan of mat colours. I always try to have a mat-black car and it’s something that I love. Plus being able to see the carbon fiber throughout it, as a Formula 1 fan, it’s something that I really enjoy. It looks really slick. What I like so far is the numbers on Trackman are consistent. My spin rate seems to be a little bit more consistent with the misses. Obviously the better the misses can be, the better it’s going to be for me. That’s what I’m looking forward to.

There’s a checklist on my swing that I can always go back to if I’m not hitting it well. I don’t need my instructor all the time because he’s going to tell me one of those three things pretty much in just a different way. So having the checklist is really important. Golf is not a hitting contest, it’s posting the best score you can post. It doesn’t matter how it looks, it’s just competing and getting the lowest round out there.

It’s always great to be here at the Sentry Tournament of Champions. It means you’ve done a good job, you’ve won a tournament and you’ve had a great year. So happy to be here as it’s a tournament I always look forward to. I’ve done well on this course, so hopefully I can add up to those stats and give myself a chance to win.

You have all the champions of the year, at least most of them, and you’re competing against winners. Not that you’re not throughout the year, but even though it’s a smaller field here, it’s very competitive because of that. You’re playing against the best who have won. So it’s always a task to win here and it would be a great honour to be able to win. I’m glad we’re back in Maui, I’m glad we have spectators and I’m glad Maui can show their support of the PGA Tour and us and enjoy the week.

I feel great, I’m happy and the mind and body are rested. I’m ready to go for the year.

* Jon Rahm is a six-time winner on the PGA Tour and you can watch him and the PGA Tour on Astro Golf Channel and GOLFTV powered by PGA Tour.