Does Malaysia have a trolley problem?

Monday, 26 Jul 2021 9:41 AM MYT By Alwyn Lau
Follow us on Instagram, subscribe to our Telegram channel and browser alerts for the latest news you need to know.
By Alwyn Lau

JULY 26 — No, I don’t mean an issue with the supply of trolleys at the supermarket. The trolley problem is a popular scenario involving ethics.

Imagine you see a runaway trolley about to slam into half a dozen people and, presumably, kill them. You are the only one who can divert the trolley by pulling a lever nearby.

However, if you did that the trolley, although missing the group of people, will inevitably kill another individual.

The dilemma becomes: Do you intentionally cause the death of the one in order to stop the accidental deaths of the many?

The situation is bad either way. And not making a choice is to make a choice.

Given the pandemic situation in our country, one may imagine we have a variation of such a dilemma: Do we reopen the economy or continue the lockdown? Do we allow businesses to open (bringing back income and "normality" in a sense while risking greater infection numbers) or do we continue the lockdown (purportedly holding back the daily positive rate, trying to ensure the safety of as many people as possible, while prolonging the misery of practically everyone in the SME sector, thousands of workers, etc)?

Not unlike the trolley problem, the situation is bad either way. And not deciding is to decide. 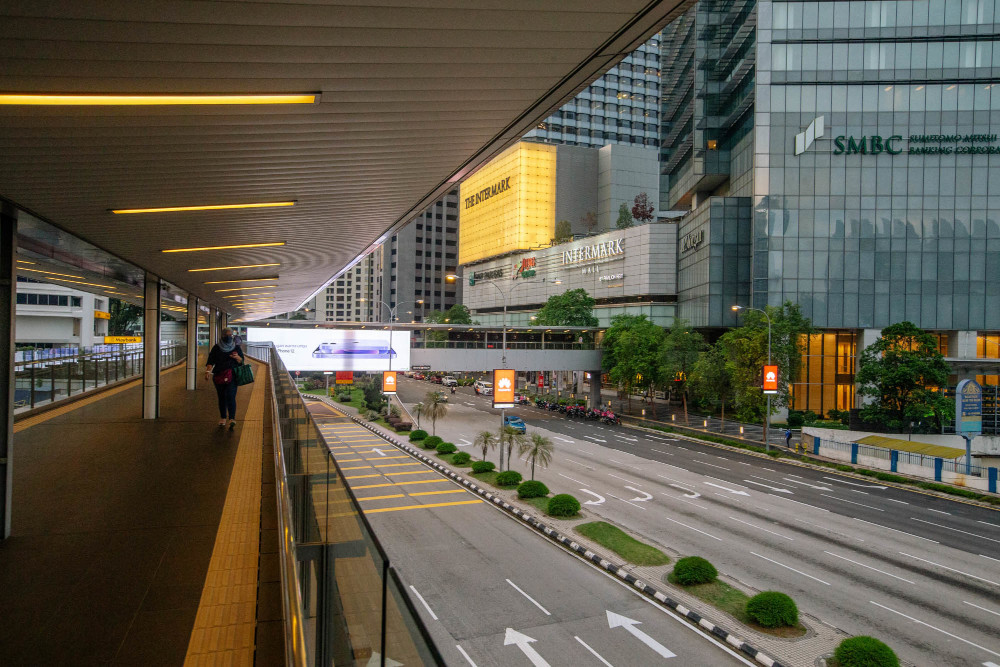 A pedestrian walks along an elevated walkway in Kuala Lumpur July 1, 2021. — Picture by Firdaus Latif

I recently raised this question in a Facebook poll. I asked what should be the priority for the country now: Reopen businesses or reduce infection numbers?

What surprised me was the high number of folks who answered something like, “Both” or “This is not an Either/Or”, as if there wasn’t an inevitable trade-off. Such an answer is a decision to "refuse" the trolley problem, it’s a decision to not decide — which is, of course, to decide without willing to accept one’s decision.

Bad both ways, but…

This essay argues that we should reopen the economy.

Malaysia’s daily positive numbers don’t look like they’re going down anytime soon, even with the lockdown. Sadly, this means that in addition to an overburdened healthcare system, we have millions of folks bordering on depression and thousands who’ve already crossed the threshold.

More than a few have already taken their lives.

If we were to reopen the economy, the #1 problem would be the surge of daily numbers upwards. As bad as this is, at the very least it gives hope in the form of income to the many out there who are languishing at home.

With something to look forward to, perhaps the mental health and job crisis can be lessened from their already dire levels.

Yes, this may cause hospitals to be packed even more — but what else is new? Even with the lockdown, we’re surpassing five-digits regularly.

Maybe the country needs to take a gamble on vaccinations and hope that the increase in daily dosages will bring returns soon? Maybe we should take the harsh step of accepting that some folks will never agree to be vaccinated and if this means they get infected they will not be prioritised for hospital admissions and treatment?

Maybe the rakyat needs to be educated that it’s their choice to make between risking Covid-19 infection and finding work, and if they get infected it’s on them?

Maybe Malaysians should accept that a significant portion of our population remains adamant against following SOPs, etc. even after almost one and a half years, thus more deaths is simply the price the nation pays collectively for such apathy, but that we will refuse to pay the price anymore in terms of a locked down economy?

This, essentially, is the trolley problem. The in-your-face acceptance of difficult decisions which necessitates the giving up of axioms previously held to be "precious" (eg, “We should only reopen after we’ve solved the public health crisis.”).

Remember, to not decide is already to decide. My call is to open up the economy and remind everyone to buck up. What’s yours?