Tuesday, 19 Jan 2021 2:21 PM MYT By Player's Blog
Follow us on Instagram, subscribe to our Telegram channel and browser alerts for the latest news you need to know.
By Player's Blog

JANUARY 19 — Back when I was in junior high, everyone wanted the Jumpman IV’s but there was no chance we could afford a new pair of Jordans back in the day.

A guy I knew had thrown a pair of old ones out at school. I saw them in the can, grabbed them out, tried them on — perfect fit. I brought them home, cleaned them up and officially had my first pair of Jordans; the iconic white and cement-gray combo everyone wanted.

To go from that moment three decades ago, to having a wall of shoes and Michael Jordan’s number in my phone—it never gets old and will never be taken for granted.

MJ reached out to congratulate me after I won the CIMB Classic in Malaysia in 2017 and having won twice in the calendar year, at 41 years old after a major shoulder surgery, I just went all-in—never knowing if I’d get the chance again. 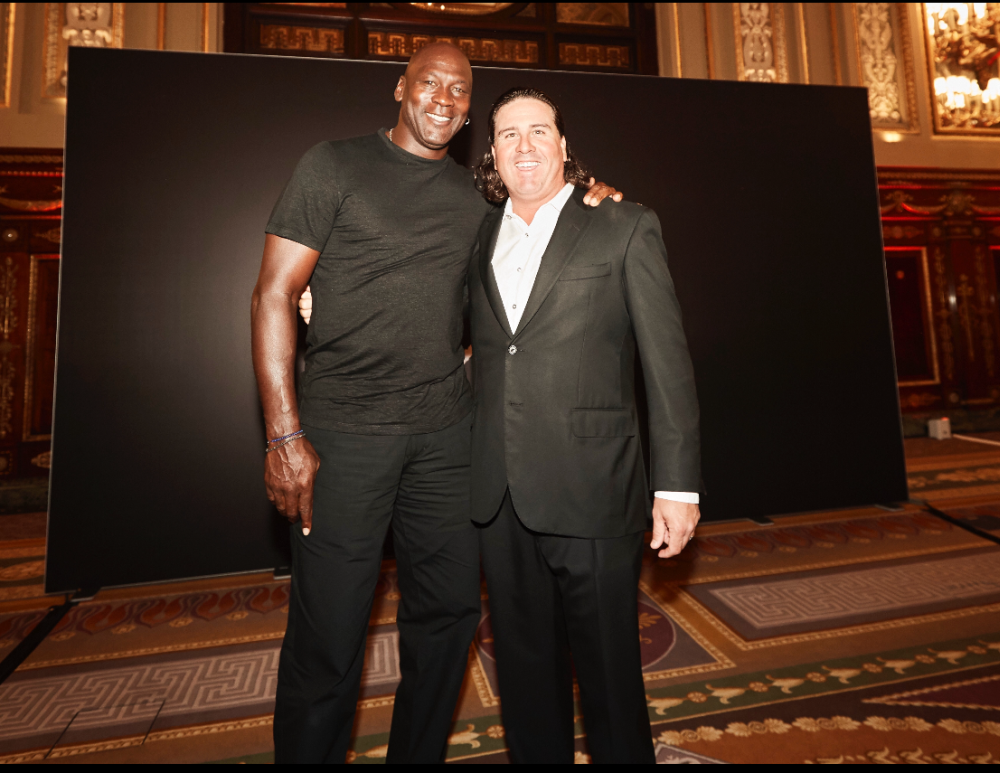 MJ reached out to congratulate me after I won the CIMB Classic in Malaysia in 2017. — Picture courtesy of Pat Perez

He said to let him know if I ever needed anything, so I immediately asked for some shoes. The floodgates opened and within a year, I was a part of the Jordan team.

I actually met MJ through a mutual friend some years back and would see him in passing, but going to Monaco with the other brand ambassadors a few summers ago was where things went next level. Just being in that setting with all those guys and getting some one-on-one time with #23, it was surreal.

I try not to bother him much, but to be able to text with him and for him to actually respond right away, my younger self would never believe me if I went back in time and explained everything that’s happened these past few years.

That trip to Monaco was as one-in-a-lifetime as it gets; just sitting out on the deck, smoking cigars and sipping tequila with the legend, every aspect of that trip and experience was just mind-blowing.

Even better is the fact MJ couldn’t be nicer, cooler and welcoming. Sometimes you meet your heroes and it’s a letdown. This has been the complete opposite.

I started collecting Jordans once I got on the PGA Tour and could actually afford to do so, especially when places like Flight Club started popping up and the secondary-market became a thing, making it easier to track down older models which I was really into.

Out the gate, I started by collecting the ones MJ made famous during his playing days and it just grew from there. It really is an insane hobby if you stop and think about it, and we’ve literally had to renovate my office a second time now to make more space for the shoes. It’s a beautiful sea of Jordans in there.

I haven’t done an official count recently but there’s probably well over 1,000 pairs of Jordans at this point and it keeps growing as the Jumpman crew keeps sending more and more gear through my association with them. I can barely keep up. Every time that delivery truck is barreling up the street, I’m like a kid at Christmas.

Even cooler is the fact my wife, Ashley is so supportive of this hobby. She thinks it’s the coolest thing ever, the fact I went from being a kid who grabbed a pair of shoes out of the trash to now being a brand ambassador for Jordan and acquaintances with the icon whose name is on the shoe. We watched “The Last Dance” series together recently and I think it really helped her understand just how globally massive MJ and his brand truly are.

One of my special pair I have is the Jordan IV "Wahlburgers" which mean a lot to me. Mark Wahlberg (actor) surprised me with the Wahlburgers shoe a couple years back when I was in Los Angeles for The Genesis Invitational. He invited us over for dinner and dropped those on me which was mind-blowing as those are super rare. 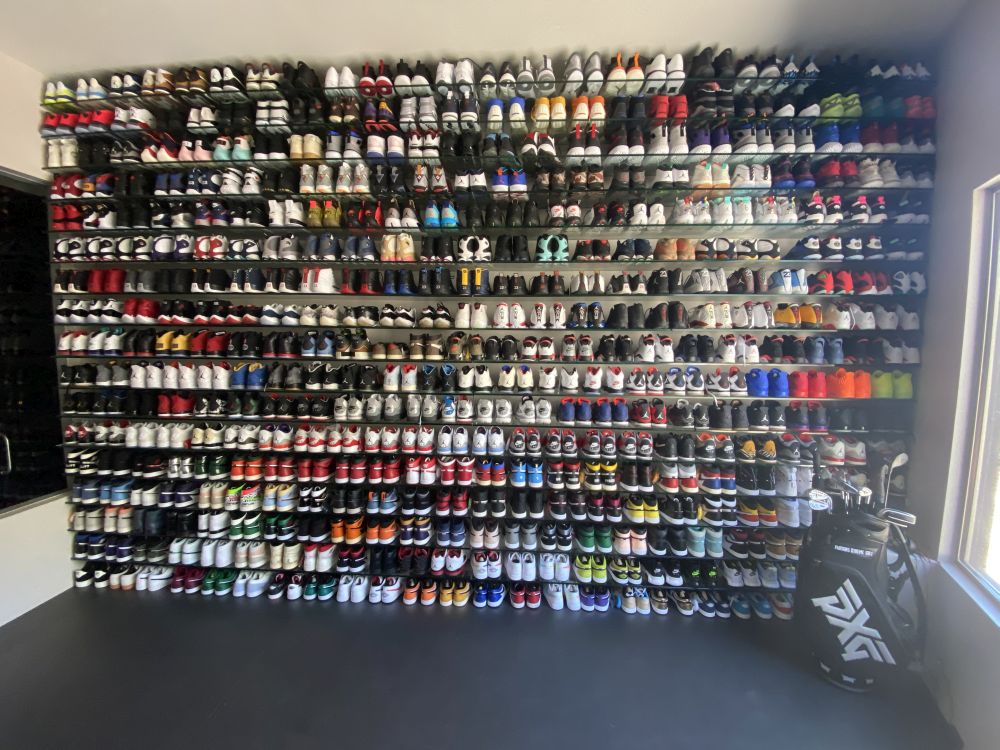 I've probably well over 1,000 pairs of Jordans at this point. — Picture courtesy of Pat Perez

I’ve also gotten my hands on all the Travis Scott shoes which I really dig as the retro “Flu Game” shoes released a few years back. Nothing means more than the Cement IV golf shoes the team made for me, though. Talk about a full circle moment; my first beat-up pair now in a custom golf shoe and there are only two pairs in the world. I still can’t get over it.

People have asked how the Cement IV golf shoes came to be and it’s crazy how nonchalant the entire experience went down. I was sitting next to Mike and playing poker in Monaco when he went outside for a cigar and invited me to grab my tequila and to come with.

The 11 had just come out and I’d mentioned how great that would look in a golf shoe, while reiterating my love for the IV, to which he said, “Well then just make the IV.” I asked what he meant and it told me to just talk to Gentry (Humphrey; VP Jordan Footwear) and to “get it done”.

I couldn’t track Gentry down fast enough and before I knew it, the ball was in motion and within weeks two pairs of Cement IV golf shoes were sent to the house. It’s literally that easy when you a legend’s blessing and he green lights it with the guy behind the guy.

Getting to know Bill over the years was definitely surreal. I first met him back in 2003 and he busted my balls about my finish at Pebble Beach the year before and things just sort of grew from there.

We’d see each other over the years, but around 2015 when things were getting off the ground with William Murray Golf, he invited me on board and I’ve been with the brand ever since.

It’s a natural fit as I love all the gear, as well as the Murray brothers’ attempts to make golf more laid-back, fun and accessible.

As close as we’ve gotten through the brand, it’s still a trip when you’re playing with him at Pebble, standing in the middle of a fairway and you realize you’re paired up with Carl Spackler, “Big Ern” McCracken or Dr. Peter Venkman. It really makes you appreciate how crazy this whole ride has been the past couple of decades. Never saw this day coming when I was dumper-diving for a pair of used kicks.

* American Pat Perez is a three-time PGA Tour winner and you can follow all the action from the Tour in Malaysia on Astro Golf Channel and GOLFTV powered by PGA Tour.