The funny thing about humanity

MARCH 20 ― Two days ago, I watched Ricky Gervais’ Humanity on Netflix. I’ve always been a fan of his dark and appalling humour, but this comedy special left me thinking.

In one of his jokes, he mentioned getting into a Twitter argument with a fundamentalist Christian who was pro-life (against abortion) but only until the child grows up to be gay ― then suddenly he is not pro-life anymore.

That got me thinking.

How ironic would it be for people who are both pro-life to suddenly advocate for abortion if technology ever advanced far enough to detect signs of homosexuality in a fetus?

While I understand that social media is never an accurate measurement of data and statistics, I had to start somewhere. 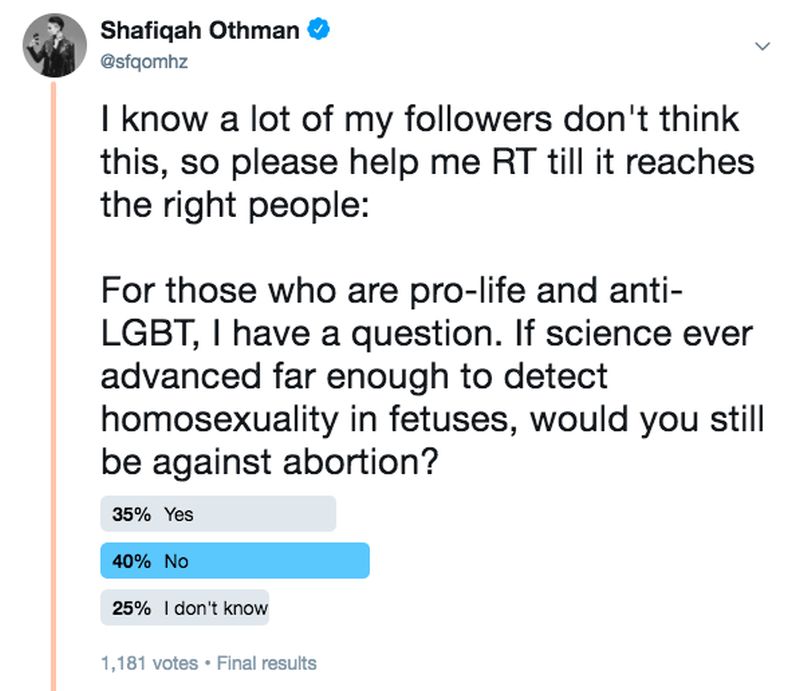 Out of 1,181 votes, the 40 per cent majority voted “No.” I don’t know what I was expecting from the poll; perhaps my expectations were too high but the results left me dumbfounded.

Now, I am pro-choice for many reasons which I shall not state here, for then it would warrant another column. However, I am trying my best to put myself in the shoes of someone who is pro-life. I understand the sentiment behind the thought, thus why the results scared me.

In the pre-Islamic era, female infanticide was widely practised, which was the burying of female babies alive when they were born because there was more honour in having a male child as compared to having a female one.

The Quran forbade this practice. If the technology had existed back then, cruel patriarchal figures might have deliberately caused miscarriages to prevent female children from being born; to “save face.”

Now I know what you're going to ask: Why equate female infanticide to LGBT infanticide? They are two different things. They are different, but they are also two sides of the same coin.

Understanding the context of the pre-Islamic era, you'd know that women were seen as objects and commodities. Thus the killing of female babies was a practice they had no problem with. But as the Quran brought about morals and ethics, ancient Arabia was taught that this was inhumane.

Female infanticide was practised during the jahiliyyah period, a dark time in which women were seen as lesser beings.

If you're willing to end a life because of its sexual orientation, how are you any different from the jahiliyyah people who buried females?

A lot of pro-lifers claim that their sentiments stem from the idea that every human life is sacred and that it is an abomination to prevent a baby the opportunity to live in the world. How terrifyingly easy it is for someone to retract this notion because of prejudice against the LGBT community.

I could go in-depth into reasons why I believe that the LGBT community deserves the right to live (which is a funny thing to demand considering it is an intrinsic human right), but I’m not here to discuss this. Perhaps another time.

I’ll end here for now, but let me just leave you with a few quotes I found while surfing the internet of Aberjhani:

“Love is our most unifying and empowering common spiritual denominator. The more we ignore its potential to bring greater balance and deeper meaning to human existence, the more likely we are to continue to define history as one long, inglorious record of man’s inhumanity to man.

“Diversity is an aspect of human existence that cannot be eradicated by terrorism or war or self-consuming hatred. It can only be conquered by recognising and claiming the wealth of values it represents for all.

“Humanity is not without answers or solutions regarding how to liberate itself from scenarios that invariably end with mass exterminations. Tools such as compassion, trust, empathy, love, and ethical discernment are already in our possession. The next sensible step would be to use them.”

Truly, if our greater intelligence is the hallmark of our species ― a distinguished advantage over all other life on Earth ― then we have to learn to use it better.