Russian President Vladimir Putin (L) and Chinese President Xi Jinping pose for a photograph during their meeting in Beijing, on February 4, 2022. (Photo by Alexei Druzhinin / Sputnik / AFP)
Follow us on Instagram, subscribe to our Telegram channel and browser alerts for the latest news you need to know.
By Zurairi A.R.

KUALA LUMPUR, June 27 — A recent survey by Pew Research Centre found that almost half of Malaysians still view Russia positively, even as global perception against the superpower has fallen to a record low following its invasion of Ukraine starting February this year.

In the survey by the Washington-based pollster, Malaysia charted the highest proportion of favourable response towards Russia among the 18 countries polled, and was also the country that had the highest confidence in Russian President Vladimir Putin “doing the right thing” on global affairs — with six out of 10 Malaysians favouring him.

“In almost every country surveyed, at least seven-in-ten have an unfavourable opinion of Russia. Malaysia is the only country where this is not true,” said the report titled “International Attitudes Toward the US, Nato and Russia in a Time of Crisis” released last week.

In Poland, for example, 91 per cent of respondents said they viewed Russia “very unfavourably”, — even higher than the 69 per cent in the United States.

“In Italy, Greece and Poland, positive views of Russia have declined by more than 30 percentage points since the question was last asked,” the report said.

A whopping 59 per cent of Malaysians also said they had “some or a lot” of confidence in Putin “doing the right things regarding world affairs, compared to just 36 per cent in Singapore.

“In general, Europeans who support right-wing populist parties in their country are more likely to have confidence in Putin to do the right thing in world affairs,” it said.

“A similar pattern exists regarding general ideological leanings. There were large ideological divides in 2021 on attitudes toward Putin, with those on the right of the political spectrum expressing more confidence in him than those on the left.”

Much like their approval of Putin, Malaysian respondents were also confident of Chinese president Xi Jinping, with 62 per cent saying they had confidence in him “doing the right thing” on global affairs.

Singapore was the only country among the other 17 who shared the same opinion as Malaysian on Xi, with a higher percentage of 69 per cent viewing Xi positively. 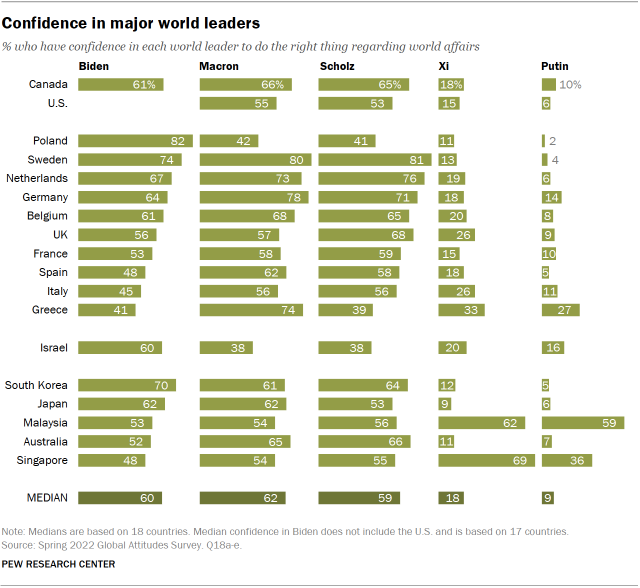 Conversely, Malaysian respondents also viewed the United States negatively, with 56 per cent saying the superpower is not a reliable partner.

Meanwhile, 53 per cent of Malaysians said they were confident that US president Joe Biden is “doing the right thing” on global affairs, compared to 46 per cent who had no confidence.

In addition, 61 per cent of Malaysians also said that the US’ decision to withdraw all American troops from Afghanistan in August 2021 was the right decision, with 53 per cent of them saying the move was handled well.

“Across the Asia-Pacific publics surveyed, views of the US exit of Afghanistan are slightly more positive overall than in Europe. Majorities in Malaysia, Australia and Singapore look favourably on the decision,” it said.

“Despite generally supportive views of the US withdrawal of troops from Afghanistan, public opinion in the countries surveyed is less positive on how the withdrawal was handled... Only in two countries do half or more feel favourably toward the handling of the US exit from Afghanistan: Poland and Malaysia,” it added. 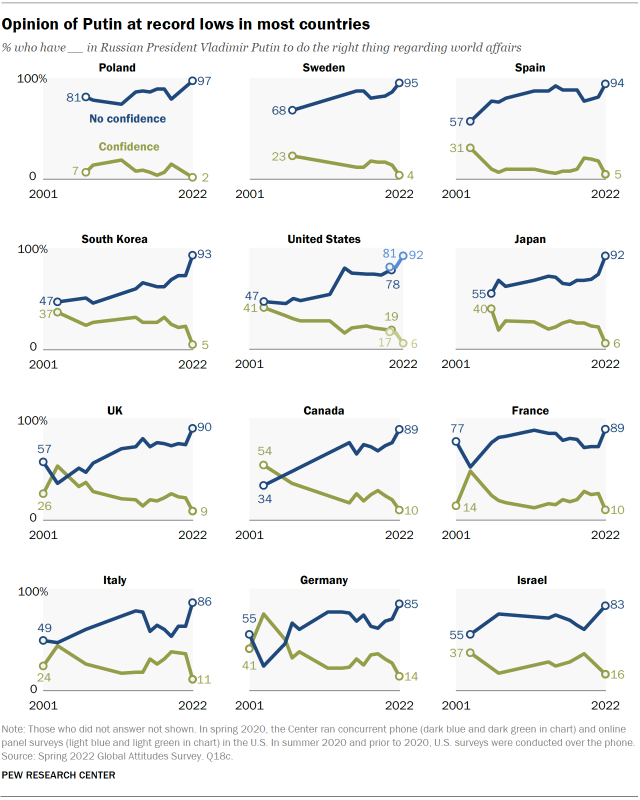 China is Malaysia’s biggest trading partner, with the US as the third after Singapore.

Russia is not even in the top 25, but Putrajaya previously said that relations between the two remain cordial despite the former being implicated in the downing of Malaysia Airlines’ Flight MH17 in 2014.

The report draws on nationally representative surveys of 19,903 adults across the countries from February 14 to May 11 this year, with most occurring after Russia’s invasion of Ukraine which began February 24.

Putin and Lukashenko discuss situation with global supply of fertilisers