Merdeka babies sleep in their cribs in Hospital Kuala Lumpur August 31, 2018. — Picture by Razak Ghazali
Follow us on Instagram, subscribe to our Telegram channel and browser alerts for the latest news you need to know.
By IDA LIM

KUALA LUMPUR, March 1 ― The High Court today declared that two siblings born in Kuala Lumpur to a Malaysian father and Indonesian mother are Malaysian citizens under the country’s Federal Constitution, as they were not born citizens of any other countries.

The two siblings are a girl due to turn 16 and a boy due to turn 15 this year, and their Malaysian father had been trying since December 2012 or slightly more than nine years ago to have them recognised as Malaysians.

The children’s lawyers confirmed to Malay Mail that the decision was delivered by the High Court judge Datuk Wan Ahmad Farid Wan Salleh today to recognise the two teenagers as Malaysians.

The two other court orders granted by the judge are a mandamus order to direct the Registrar of Births and Deaths and the Registrar-General of Births and Deaths to reissue the two siblings’ birth certificates to reflect their status as Malaysian citizens, and a mandamus order to direct the National Registration Director-General to issue an identity card with the status “Warganegara” (Citizen) to the two siblings.

What happened in this case

In the interests of the children, Malay Mail is withholding their names and the names of their parents. For ease of reference, their Malaysian father will be referred to as L. The two children share the same surname as their father.

Based on court documents, the two children were born in 2006 and 2007 in a medical facility at Bandar Baru Wangsa Maju in Kuala Lumpur to the Malaysian father L and an Indonesian national mother, who were not married at the time of their births. In November 2012, L and the children’s mother registered their marriage.

The father L had made several attempts to have the two siblings recognised as Malaysians.

L’s first citizenship application for the two children was made on December 13, 2012 under Article 15A of the Federal Constitution (when the siblings were aged five and six), but this was rejected by the Home Ministry via a January 22, 2014 letter that informed that their applications was unsuccessful without giving any reasons why. By then, the two children were slightly over the ages of six and seven.

The father applied again on May 8, 2014 under Article 15A, but the Home Minister through an April 27, 2018 letter rejected the application without giving any reason.

Article 15A provides that the federal government may register anyone under the age of 21 as a Malaysian citizen, “in such special circumstances as it thinks fit”.

L and the two children had previously in February 2020 and December 2020 wrote to the respondents to demand that the siblings be recognised as Malaysian citizens under the Federal Constitution’s Article 14(1)(b), read together with either Section 1(a) or Section 1(e) of Part II of the Federal Constitution’s Second Schedule within 14 days from the letters’ date. L has yet to receive a reply to these letters.

The Federal Constitution’s Article 14(1)(b) provides that every person born on or after Malaysia Day and fulfilling any of the conditions in Part II of the Second Schedule is a citizen by operation of law — or automatically entitled under the law to Malaysian citizenship. 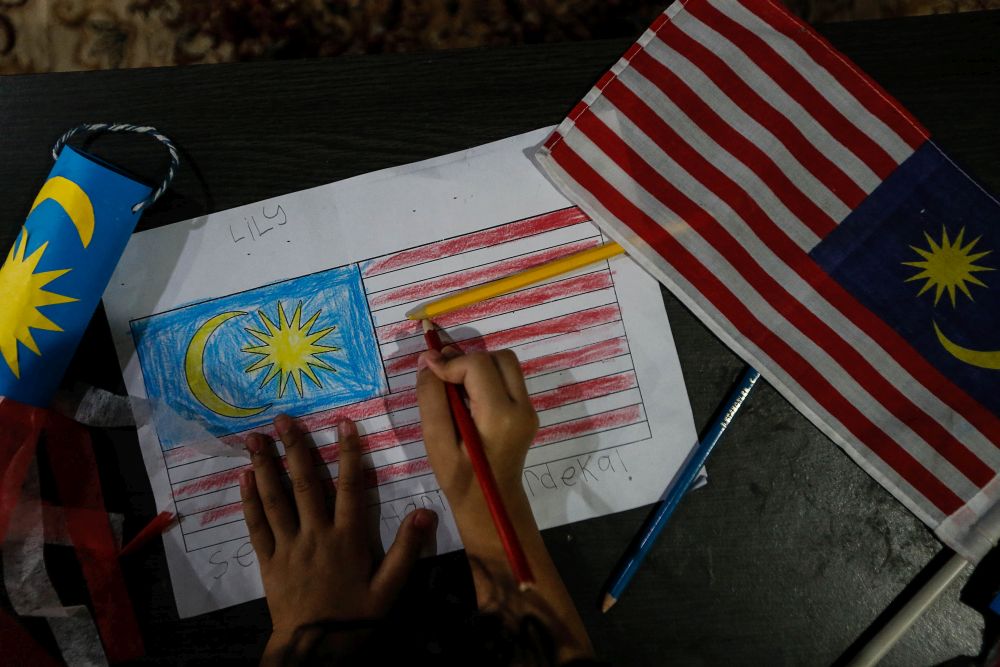 A girl is pictured colouring the Malaysian flag on National Day in Kepala Batas, Penang August 31, 2021. — Picture by Sayuti Zainudin

Surendra Ananth, who is one of the lawyers representing L and the two siblings, told Malay Mail that the High Court granted leave for judicial review on April 21, 2021 and heard the actual judicial review on December 15, 2021 before delivering today’s decision.

L and the two siblings were also represented by lawyers Calvin Khoo and Gasper Wun, while the five respondents were represented by senior federal counsel Nur Idayu Amir.

Based on court documents, one of the main arguments by L’s lawyers is that the Section 1(e) condition for Malaysian citizenship has been fulfilled, as the two siblings were born in Malaysia and were not born a citizen of any country.

The respondents had also argued that they were not qualified to be Malaysian citizens by operation of law under either the Section 1(a) or Section 1(e) conditions.

In an affidavit made on behalf of all respondents, National Registration Department (NRD) director-general Datuk Ruslin Jusoh had said the two children are illegitimate at birth as their parents were not married at the time of their birth, and argued this meant that their citizenship status should follow their Indonesian mother’s citizenship.

Ultimately, the High Court judge today ruled in favour of the two children being recognised as Malaysian citizens.

In explaining the High Court’s decision today, Surendra told Malay Mail that one of the judge’s reasons for why the Section 1(e) condition applies to the two children, was that their father had said they are not citizens of any other country and that the respondents had not disputed or deny this and had only argued that Section 1(e) does not apply due to the mother’s Indonesian nationality.