DNB didn’t reveal if any telco has taken up the 5G availability, but they said they will be making an announcement sometime this month. — SoyaCincau pic
Follow us on Instagram, subscribe to our Telegram channel and browser alerts for the latest news you need to know.
By ALEXANDER WONG

KUALA LUMPUR, Dec 3 — During today’s media briefing, Digital Nasional Berhad (DNB) has revealed that it aims to settle its 5G wholesale agreement with mobile network operators by the end of March 2022. They also shared that consumers will be able to “experience” 5G services by the end of this month.

A DNB representative told us that they plan to make 5G services available in December which is aligned with their license condition. When we asked if this means consumers can subscribe to 5G services from their telcos, they said DNB is providing the availability to the mobile network operators. DNB didn’t reveal if any telco has taken up the 5G availability, but they said they will be making an announcement sometime this month. They told us to stay tuned as DNB will provide updates about how 5G is going to be and how consumers can participate.

It is worth highlighting that telcos must sign a wholesale agreement with DNB before they can offer commercial 5G services to consumers. The commercial negotiation with the telcos is believed to be still ongoing. Recently, Finance Minister Datuk Seri Tengku Zafrul Abdul Aziz revealed that the cost of 5G services to the telcos would be less than 20 sen per GB and it would be cheaper than the cost of offering 4G services on their own network.

Previously, Reuters reported that none of the telcos have signed with DNB due to transparency and pricing issues, and their initial timeline for negotiations had been “too optimistic”. DNB has refuted the report saying that telcos could only sign after the reference access offer is finalised.

Before telcos sign a formal commercial agreement, DNB shared that users will be able to “experience” 5G services by end of this month. This could be yet another 5G showcase similar to the 5G Demonstration Project held in 2019 or a free trial experience for selected users.

Before Singapore launched commercial 5G services, telcos such as StarHub and Singtel had offered free 5G access and data to selected subscribers with 5G-compatible devices. Last year, U Mobile had kicked off its own 5G user trial at Berjaya Times Square where subscribers can connect to their 5G network at no extra charge.

If DNB wants Malaysians to enjoy 5G services before the year is out, there’s a high chance that DNB would allow telcos to provide 5G services for free under a user trial programme. More details should be revealed soon in the coming weeks ahead of the Christmas holiday. 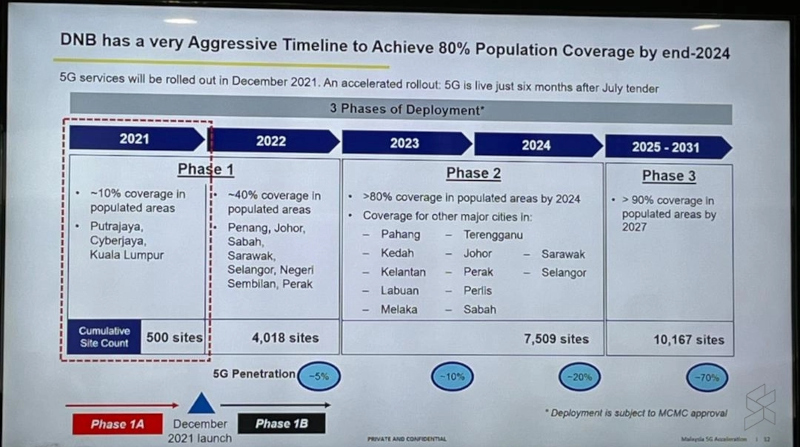 According to DNB, they have an aggressive timeline and they will utilise existing infrastructure to speed up 5G deployment. — SoyaCincau pic

At the moment, DNB is confident of switching on a total of 500 5G sites to cover 10 per cent of Malaysia’s population by the end of this year. The initial coverage areas include Putrajaya, Cyberjaya and Kuala Lumpur. Next year, it aims to increase the 5G footprint to cover 40 per cent of populated areas which will include Penang, Johor, Sabah, Sarawak, Selangor, Negri Sembilan and Perak with a total of 4,018 sites.

By the end of 2024, DNB aims to hit 80 per cent population coverage which will cover major cities in Pahang, Terengganu, Kedah, Johor, Sarawak, Kelantan, Perak, Selangor, Labuan, Perlis, Melaka and Sabah. According to DNB, they have an aggressive timeline and they will utilise existing infrastructure to speed up 5G deployment. — SoyaCincau