In the lawsuit filed in the High Court in Shah Alam against Thomas and his book’s publisher GB Gerakbudaya Enterprise Sdn Bhd, Najib claimed to have been defamed by Thomas through the latter’s statements in his memoir ‘My Story: Justice in the Wilderness’. ― Picture by Miera Zulyana
Follow us on Instagram, subscribe to our Telegram channel and browser alerts for the latest news you need to know.
By IDA LIM

In the lawsuit filed in the High Court in Shah Alam against Thomas and his book’s publisher GB Gerakbudaya Enterprise Sdn Bhd, Najib claimed to have been defamed by Thomas through the latter’s statements in his memoir My Story: Justice in the Wilderness.

Najib referred to several paragraphs made by Thomas in Chapter 42 of the book under the caption “Altantuya” as found in pages 404 and 405 as the alleged defamatory statements.

In this lawsuit, Najib is claiming for several court orders, including for compensation in the form of general, aggravated, exemplary or punitive damages, as well as an order for the alleged defamatory passages to be removed from the book.

In the lawsuit, Najib is also seeking for an unqualified apology ― in terms to be approved by Najib’s lawyers ― to be published in at least three major newspapers of Najib’s choice for three consecutive days, an undertaking by Thomas and the publisher to not write or publish the allegations and a permanent injunction to stop them from further publishing the same or similar statements.

When contacted by Malay Mail, a lawyer from the law firm Shafee & Co ― Muhammad Farhan Muhammad Shafee ― confirmed that the lawsuit was filed and served today. 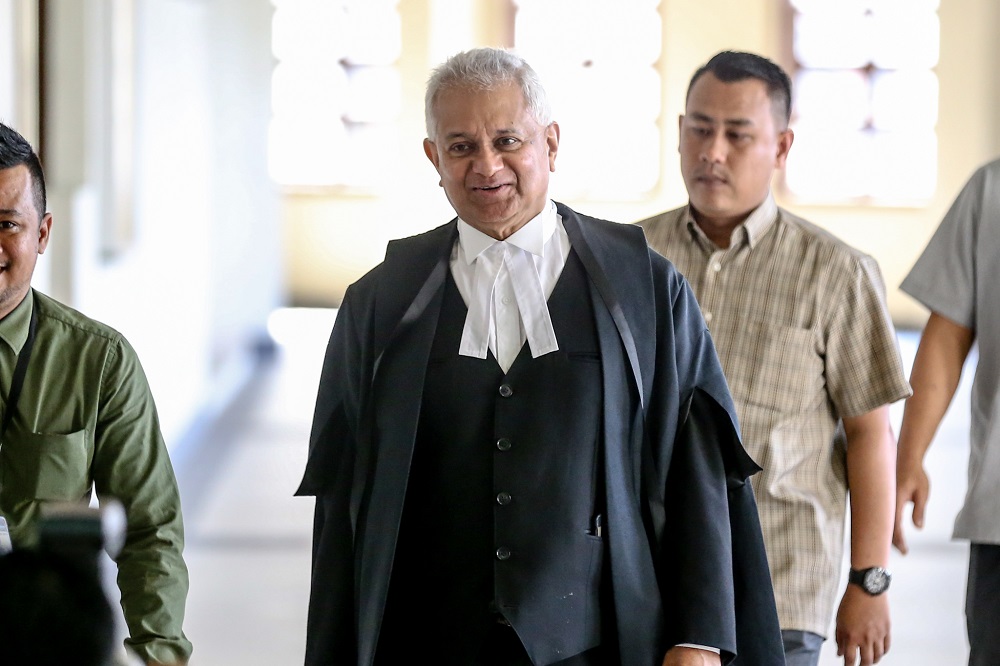 What Najib is claiming

In his statement of claim, Najib claimed that the alleged defamatory statements in Thomas’s book — which was released on January 30 this year — would have been understood to mean that Najib was allegedly “guilty of a conspiracy” to murder Altantuya despite the conviction of two former police commandos in the courts.

Najib claimed that the book’s alleged defamatory statements would be understood to carry the meaning that he had directly associated himself with former chief inspector Azilah Hadri and former corporal Sirul Azhar Umar — the two convicted persons — with Altantuya’s murder, and that he was allegedly linked to the alleged conspiracy as deputy prime minister and had allegedly misled the public and covered his tracks as prime minister.

Najib said the alleged defamatory statements would also be understood to mean that he allegedly had a hidden agenda to have Altantuya murdered and had allegedly given instructions for her to be eliminated as a purported foreign spy and for national interest.

Najib claimed that Thomas was “mischievously placing the seeds of doubt and mistrust” in readers’ minds that he was in alleged conspiracy with the two convicted persons and responsible for Altantuya’s murder, but asserted that the allegations in the book had no merits and could not be proven in court and were scandalous comments made for collateral political purposes.

In accusing Thomas of having allegedly acted with malice, Najib claimed that Thomas had written Chapter 42 in the book in an “inflammatory, reckless, sensational and defamatory manner” without factual basis.

Najib claimed that Thomas as the attorney-general then had been biased against Umno and Barisan Nasional and was allegedly in favour of DAP and PKR and their leaders, further accusing Thomas of having abused his position to allegedly make up evidence against Najib over Altantuya’s murder.

Najib claimed that Thomas had the alleged motive of unlawfully bringing a murder charge against him without bail being offered.

Najib also claimed that Thomas had wanted to ensure that the former would be imprisoned and barred from contesting in the general election to deal “the biggest blow” against Umno and BN, and to demolish Najib’s recently-found popularity that was allegedly troubling parties opposed to Umno and BN.

Having asserted that the alleged defamatory statements are all false, Najib in the same lawsuit claimed he has suffered and continues to suffer damage to his reputation as a result of the statements in Thomas’s book.

Najib claimed to have been subjected to humiliation and embarrassment due to the publication of the book, which he said contained grave allegations against him and which allegedly showed malicious conduct and reckless disregard by Thomas and the publisher on whether those allegations would be defamatory towards him.

Claiming to have suffered serious injury to his reputation and character due to the book, Najib in seeking for compensation via aggravated damages said he would be relying on several matters including the nature of the alleged defamation, alleged malice and alleged failure to verify facts before publication and alleged knowledge that what was written was allegedly false or recklessly written.

Separately, Najib had also on October 22 filed another civil lawsuit against Thomas and the Malaysian government, where he sought for RM1.9 million in compensation over alleged wrongful and alleged malicious prosecution where he has to face 35 charges in four criminal cases.

The lawsuit was filed on Najib’s behalf by another law firm, Raj, Ong & Yudistra.

Lawyer Yudistra Darma Dorai — from the law firm who had filed the lawsuit for Najib — told Malay Mail that the lawsuit has been served today on both Thomas and the Malaysian government.

This separate lawsuit is scheduled for case management on November 19.

Thomas was Malaysia’s attorney-general from June 2018 until his resignation on February 28, 2020 following a change in government from Pakatan Harapan to Perikatan Nasional.