Prosecution: If RM6m cheques genuine ‘political donation’, why was it given to Zahid and not BN directly?

The prosecution today was presenting its arguments in the High Court on why Datuk Seri Ahmad Zahid Hamidi has to be called to enter his defence over eight bribery charges, including two charges involving the RM6 million cheques. — Picture by Ahmad Zamzahuri
Follow us on Instagram, subscribe to our Telegram channel and browser alerts for the latest news you need to know.
By IDA LIM

KUALA LUMPUR, Oct 4 — A businessman’s RM6 million cheques given as a purported “political donation” should have been passed in 2017 to Barisan Nasional directly, instead of being handed over to then deputy prime minister Datuk Seri Ahmad Zahid Hamidi and paid out to a law firm, the prosecution said today.

The prosecution today was presenting its arguments in the High Court on why Ahmad Zahid has to be called to enter his defence over eight bribery charges, including two charges involving the RM6 million cheques.

Under these two corruption charges, Ahmad Zahid was accused of having on April 26, 2017 corruptly received gratification from Datasonic Group Berhad’s director Chew Ben Ben in the form of two cheques issued by Sarana Kencana Sdn Bhd for RM5 million and RM1 million — which were made payable to law firm Lewis & Co — as a “reward”.

Under the same two charges, Ahmad Zahid was accused of having received the two cheques totalling RM6 million as a reward for his role as the home minister then in carrying out any transactions that later led to Datasonic Technologies Sdn Bhd’s appointment to supply Malaysian passport chips for five years through direct negotiation between this company and the Home Ministry.

Today, deputy public prosecutor Gan Peng Kun noted that Ahmad Zahid’s lawyers had sought to rely on the claim by two former Datasonic Group officials that the RM6 million was not meant for bribery.

(Abu Hanifah retired from Datasonic Group Berhad on January 31, 2020, while Chew resigned from the same company in March 2021.)

Gan however cited past court judgments where it was stated that it is the duty of a trial judge to give a maximum evaluation to all evidence available and that the testimony or evidence given by all prosecution witnesses must withstand strict scrutiny and cannot be taken at “face value”.

“We submit the evidence of witnesses SP32 (Abu Hanifah), SP34 (Chew) that the money is a political donation should not be taken at face value,” he said.

Even if the High Court finds it needs to consider Abu Hanifah’s and Chew’s intention, Gan argued that the evidence that has been brought forward in court in Ahmad Zahid’s trial so far shows that the RM6 million could not have been meant as a political donation.

“First, if it is true that the money was intended to be a political donation, then why it was given to the accused, the home minister, whose ministry was instrumental in giving the job to supply passport chips to Datasonic Technologies, and not to other ministers?

“Secondly, the money was made payable to Lewis & Co, and not to Barisan Nasional,” Gan said, noting that the law firm is not related to BN.

Gan added that if it was true that the RM6 million was meant to be a political donation, the cheques should be made payable to BN, instead of being handed by Ahmad Zahid to Lewis & Co’s partner Muralidharan Balan Pillai to be banked into Lewis & Co’s account.

Gan argued that the circumstantial evidence points to the irresistible conclusion that the RM6 million cheques were meant as a reward for Ahmad Zahid’s role as home minister that led to Datasonic Technologies subsequently being given the job of supplying the passport chips.

Gan also noted that Chew had told the court that he would not have suggested to Abu Hanifah to give the RM6 million cheques to Ahmad Zahid, if Ahmad Zahid was not the deputy prime minister and home minister then.

Gan then referred to then High Court judge Raja Azlan Shah in the 1977 judgment in the corruption case of former Selangor mentri besar Datuk Harun Idris, where the judge had said the circumstances where the money or gratification was solicited gives rise to the inference that it was solicited corruptly.

In considering whether there was corrupt intention in the soliciting of a political donation, the judge in the 1977 judgment had said the donations — whether via cheque or not — would ordinarily be personally handed over by a representative of the firm making the donation “at a proper place and in the presence of witnesses, not in some ‘back alley’”.

The judge had in the 1977 case said that a donor would ordinarily want to be present to show that he is participating in whatever worthy cause the recipient is involved in — politics, charity, education or welfare — and that such a donation would be properly presented and properly acknowledged. (In that case, the purported donation of $250,000 (the Malaysian currency was then in $) allegedly for Umno was given in two batches, namely in cash at an airport before Harun’s departure overseas and in cash placed in a locked tin box kept at a bank which was left at Harun’s disposal or made available for him to access.)

“In our case, the alleged donation was handed by SP34 (Chew) to the accused (Ahmad Zahid) in the accused’s official residence, not in some ‘back alley’, but without presence of media or close aides of the accused, bearing in mind he was the deputy prime minister.

“The similarity in Harun Idris’s case with our case is too glaring to ignore. Therefore subjecting all evidence to maximum evaluation, the cheques are not a political donation but a gratification to the accused as reward to appoint Datasonic Technologies as supplier of passport chips,” Gan argued. 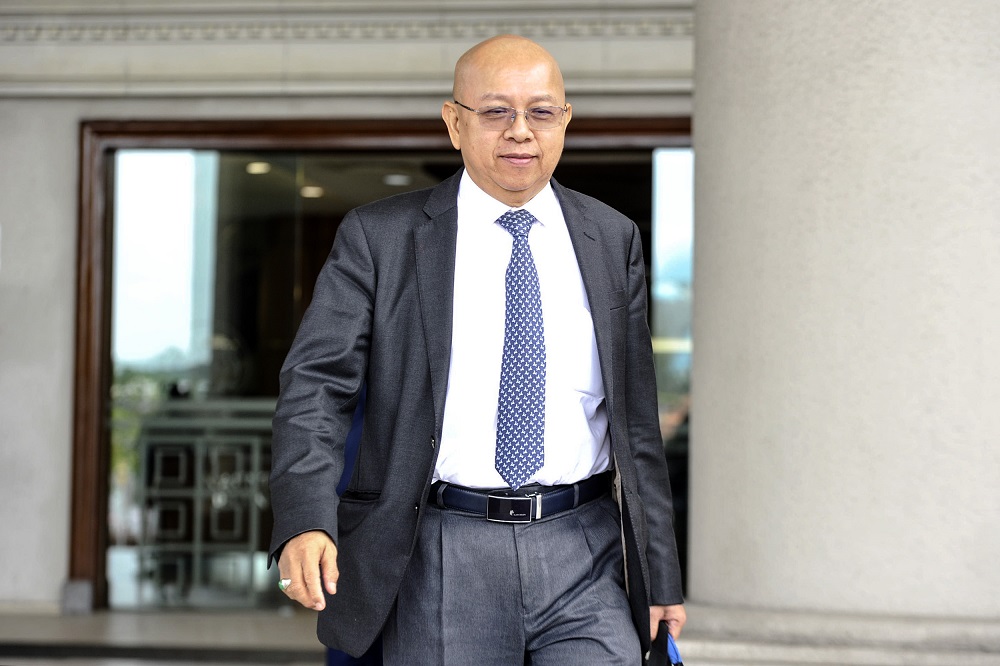 As for Ahmad Zahid’s lawyers’ arguments that there is no connection between a handwritten minute by Ahmad Zahid in October 2015 and the RM6 million payment in April 2017 due to a gap of three years, Gan today clarified that the actual timeline that should be looked at is from June 2016 when Datasonic Technologies started supplying the passport chips.

He said that this would mean there was only about a gap of 10 months between the start of the contract and when the RM6 million cheques were handed over by Chew to Ahmad Zahid.

As for the October 2015 minute by Ahmad Zahid, he had as home minister written and signed off on brief instructions to the Home Ministry’s then procurement division secretary Datuk Abd Aziz Md Nor to ask for the expediting of a key document required for the passport chips project’s award to Datasonic Technologies.

The minute by Ahmad Zahid stated that the proof of concept — a process where the company has to present its product to the related government agency — had been completed, with Ahmad Zahid also asking for the Letter of Acceptance (LOA) be issued immediately.

Gan noted that Abd Aziz had previously testified that the word “segera” or immediately was rarely used by a minister, and that urgent attention had to be given when such a word was used.

Gan said that the Home Ministry officials were initially not agreeable for Datasonic to supply the passport chips, but that things took a different turn when Ahmad Zahid wrote the October 2015 minute which later led to Datasonic Technologies being approved to supply the chips.

Gan said Ahmad Zahid’s minute — which was done without first discussing with senior Home Ministry officials — had changed the initial position taken by the ministry’s officials that were not agreeable to Datasonic Technologies, saying: “Without go ahead from the Home Ministry, the contract certainly could and would not be awarded to Datasonic.”

“This is what we meant by the accused was instrumental in the award of the contract to Datasonic Technologies,” he said.

Gan argued that Ahmad Zahid was actually actively involved in ensuring Datasonic was awarded the contract.

Datasonic Technologies later asked to start supplying the chips from June 2016 (before the previous supplier’s tenure ended) instead of December 2016 and that this request was approved following another minute by Ahmad Zahid for this to be considered, with Gan arguing this led to a passport shortage in mid-2016 as Datasonic Technologies’ chips were not compatible with the passport books supplied by the previous supplier.

Gan said Chew met with Ahmad Zahid twice, with the first being in September 2016 when he was asked to explain the passports shortage and the second being in April 2017 when their conversation later touched on the upcoming general elections and with Chew saying he had asked whether he and Abu Hanifah could contribute to BN and by how much.

Ahmad Zahid had said the amount would be up to them and had said the cheques were to be made out to Lewis & Co, the prosecution noted. As for the RM6 million cheques being issued by Sarana Kencana, Gan disputed the claim by Ahmad Zahid’s lawyers that this company was not affiliated to Datasonic Technologies.

Gan highlighted that Chew had previously explained the use of Sarana Kencana cheques by saying that he had suggested to Abu Hanifah to use his own money since Datasonic could not withdraw money from the company account without the board of directors’ approval.

Gan also argued that the two corruption charges involving the RM6 million cheques as a reward for Ahmad Zahid’s role in conducting “any transactions” that led to the project’s award was not vaguely worded and did not make it difficult for Ahmad Zahid’s lawyers to prepare a proper defence, noting that the charges already clearly said that the transactions were over the project’s award to Datasonic Technologies.

Gan also said that Ahmad Zahid’s lawyers were not misled as they were given documents —carrying Ahmad Zahid’s October 2015 minute — about 11 months before the trial started in November 2019, and that there is no miscarriage of justice as his lawyers were given sufficient opportunity to cross-examine the prosecution witnesses, and that these two corruption charges are ultimately not defective.

In this trial, Ahmad Zahid — who is the current Umno president — is facing 47 charges, namely 12 counts of criminal breach of trust in relation to charitable foundation Yayasan Akalbudi’s funds, 27 counts of money laundering, and eight counts of bribery charges.