Datuk Seri Ahmad Zahid Hamidi is pictured at the Kuala Lumpur Court Complex September 15, 2021. — Picture by Ahmad Zamzahuri
Follow us on Instagram, subscribe to our Telegram channel and browser alerts for the latest news you need to know.
By IDA LIM

KUALA LUMPUR, Sept 15 — Datuk Seri Ahmad Zahid Hamidi should not have to face two of eight corruption charges in a trial now because of “unreliable” testimony from the prosecution’s star witness, his defence lawyer told the High Court today.

Lead defence counsel Hisyam Teh Poh Teik argued that the star witness, textile wholesaler Junaith Asharab Md Shariff who had made “donations” worth millions of ringgit purportedly for religious purposes, was not credible when testifying about the former home minister’s supposed promises to give projects after the 14th general election.

He pointed out that the prosecution has also declared its own witness as “hostile” due to his conflicting testimony in court.

Junaith Asharab was the 36th prosecution witness who told the court that he had in 2017 handed over 10 cheques worth a total of RM5 million to Ahmad Zahid in his house, and that this was witnessed by Ahmad Zahid’s younger brother Datuk Seri Mohamad Nasaee Ahmad Tarmizi.

Junaith Asharab, who runs Berani & Jujur Trading, said that the RM5 million was his donation for a mosque and a tahfiz school in Bagan Datuk, and had also confirmed that all 10 cheques of RM500,000 each did not have the recipient written on it.

However, Hisyam argued today that Junaith Asharab had later denied making these three statements under cross-examination.

Teh said the High Court should reject Junaith Asharab’s contradicting testimonies on these paragraphs as these were not reliable, arguing that this should then result in Ahmad Zahid no longer being prosecuted over corruption charges (Charges 11, 12, 13) and money laundering charges (Amla Charges 11, 26). Earlier, Teh said that Junaith Asharab had explained in court why he contradicted his own testimony, noting that this witness had claimed that his statement to the MACC was following what a Malaysian Anti-Corruption Commission officer had said.

Teh said the prosecution had not challenged the witness by saying that such an explanation is incorrect, saying that this meant the court should accept what Junaith Asharab said.

Teh highlighted Junaith Asharab too had said that he felt pressured while being investigated by and giving his statement to the MACC for hours, and that there were purported threats to charge him and agreeing that he would sign anything to be released from the investigations.

Teh said the prosecution should have sought to rebut Junaith Asharab on these points, such as by calling the officer who had recorded Junaith Asharab’s statement to the MACC.

“So this was not done by the prosecution, the question is why did they not do that? The opportunity was in their hands but they did not do that,” Teh said, before going on to say three of the corruption charges and two of the money laundering charges against Ahmad Zahid cannot stand.

Teh went on to say that Junaith Asharab’s testimony can be supported by other independent evidence, such as by law firm Lewis & Co’s partner Muralidharan Balan Pillai who agreed that the law firm held funds for Yayasan Akalbudi (a charitable foundation where Ahmad Zahid is a trustee).

Teh also cited public-listed firm MyEG’s announcement in October 2018 to Bursa Malaysia that the company had never made any payment to secure government concessions, and that it had no knowledge of dealings between Mastoro Kenny IT Consultant & Services and Ahmad Zahid and that it had never awarded any projects with Mastoro Kenny.

Junaith Asharab’s former Perak schoolmate M. Kumaraguru M. Muthusamy had previously told the court that he had in 2016 set up Mastoro Kenny on Junaith Asharab’s request as the latter claimed to be able to obtain projects from public-listed firm MyEG Services Bhd, but said this company never received any projects from MyEG or anyone since its formation until it closed down in 2018 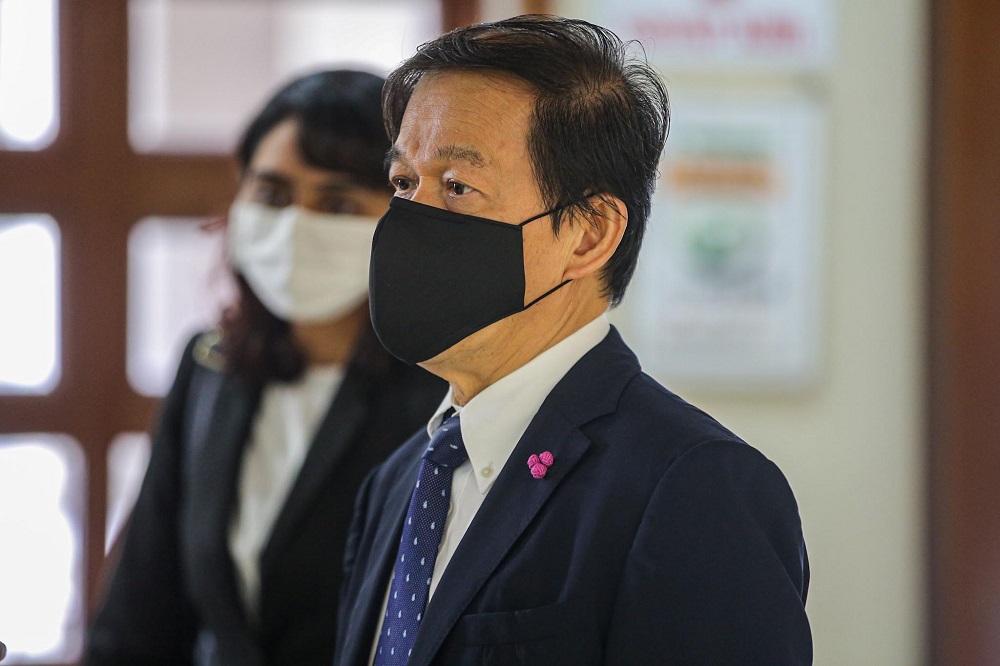 What were the RM13m donations for?

Apart from the RM5 million donation made via 10 cheques in 2017, Junaith Asharab had also made a “donation” worth RM8 million through 13 cheques that he handed over in 2016 to Ahmad Zahid in his residence with Mohamad Nasaee witnessing.

Teh said Junaith Asharab had previously told the court that both the RM8 million and RM5 million were both donations for the building of a mosque in Bagan Datuk and for a tahfiz or religious school in Bagan Datuk.

Teh said the court should accept this explanation as the prosecution did not dispute this, saying that this was “direct evidence” from Junaith Asharab that he gave the cheques totalling RM13 million for the sole, single purpose of “charity and religious advancement”.

The judge had asked if the cheques’ purpose was allowed under Yayasan Akalbudi’s company constitution or Memorandum and Articles of Association in terms of receiving donations, with Teh agreeing and saying: “Yes, My Lord, we say there’s nothing illegal, nothing outside, ultra vires the objects of the foundation.”

Teh said the corruption charges against Zahid over these RM13 million cheques should fall if the court accepts Junaith Asharab’s explanation on their purpose.

Teh today responded to various written submissions by the prosecution, including its assertion that Ahmad Zahid as a home minister then “definitely had a say” on who “MyEG projects” in the Home Ministry would be awarded to.

Teh argued that this assertion cannot stand, as someone ― whose name has been used behind his back without his knowledge to commit a crime ― is not liable until and unless charged under Section 34 of the Penal Code for bearing common intention to commit the crime.

Teh also argued against the prosecution’s assertion that Junaith Asharab “who had planned to get MyEG projects under the Home Ministry” had readily agreed to contribute upon Ahmad Zahid’s request for contributions to build a mosque and tahfiz school in Bagan Datuk, as well as the prosecution’s assertion that Junaith Asharab must have told Nasaee of his intention to get the MyEG projects and that Nasaee must have communicated this intention to his brother Ahmad Zahid.

“This is speculation, My Lord, pure and simple,” Teh said, saying that the prosecution had not called in Nasaee as a witness to testify in court.

“The law does not allow speculation, guesses of that nature. So this again is totally baseless,” he argued, again reiterating that the three corruption charges must fall.

In this trial, Zahid ― who is a former deputy minister and currently the Umno president ― is facing 47 charges, namely 12 counts of criminal breach of trust in relation to charitable foundation Yayasan Akalbudi’s funds, 27 counts of money laundering, and eight counts of bribery charges.