The Pahang State Forestry Department destroyed about 15,000 durian trees in Hutan Simpanan Batu Talam within nine days. — Picture courtesy of Samka
Follow us on Instagram, subscribe to our Telegram channel and browser alerts for the latest news you need to know.
By EMMANUEL SANTA MARIA CHIN

KUALA LUMPUR, July 11 — A group of Pahang-based durian farmers has chastised the Pahang State Forestry Department (JPNP) for chopping down almost 15,000 durian trees in just over a week, calling it illegal, appalling, and one that destroyed the surrounding nature and livelihood of these farmers.

The group of farmers under the Save the Musang King Alliance (Samka) condemned the “cruel and heartless” enforcement by JPNP, something Samka’s president Wilson Chang said they would be taking legal action against.

He claimed the actions of Samka had violated an existing court order granted to the farmers that prohibits any enforcement against the durian farms within the disputed parcels of land in Raub.

“The authority carried out the enforcement in Hutan Simpanan Batu Talam, which is located in Mukim Tras and subject to the interim order. Hence, the state government has no authority to circumvent the court order by carrying out enforcement operations against the farmers.

“Samka will take legal actions against the state government’s enforcement actions, file a lawsuit against the government for contempt of the court, and proactively defend the legal rights of farmers. 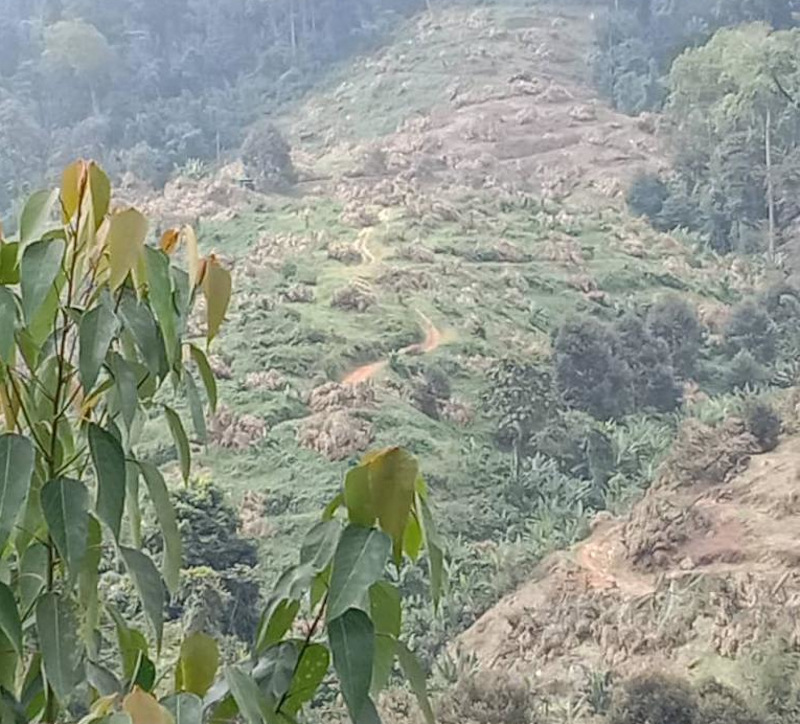 Samka condemned the ‘cruel and heartless’ enforcement by JPNP, something Samka’s president Wilson Chang said they would be taking legal action against. — Picture courtesy of Samka

“Lastly, the farmers will never submit themselves to the oppression by the state government and the consortium. Nor will they sign any unequal contracts with the consortium, which will essentially turn them into “modern-day slaves”,” read Samka’s statement.

Chang expressed disappointment towards JPNP’s actions, claiming the nine-day operation had managed to destroy trees planted and nurtured by these farmers for more than 20 years across the affected 250-acres of land.

He also decried the adverse environmental impacts caused by the deforestation exercise, saying some of the damage done would be irreversible.

“As such, the forestry department’s excuse of ‘environment preservation’ is unjustifiable and only made the department itself a laughingstock.

“In the eyes of the Pahang Forestry Department, 15,000 durian trees were merely numbers,” said Chang.

This after JPNP Chief Assistant Director (Enforcement) Nor Azirim Ahmad lauded the tree-culling exercise by his department that started on July 3, and has since chopped down trees across 101 hectares in just nine days.

Nor Azirim was quoted saying how he felt proud at the speed the operations were conducted to chop down the 15,000 trees, saying it was down to the cooperation of more than 100 JPNP staff.

The senior official, however, did also state the operations will include replanting exercises in the cleared land, saying some 20,000 trees are set to be planted in the plots that used to house the Musang King durian trees. Chang expressed disappointment towards JPNP’s actions, claiming the nine-day operation had managed to destroy trees planted and nurtured by these farmers for more than 20 years across the affected 250-acres of land. — Picture courtesy of Samka