Covid-19 ICU patients at record high again with 943, as Malaysia adds another 103 deaths

Health director-general Tan Sri Dr Noor Hisham Abdullah also said 943 Covid-19 patients have been warded in the intensive care units (ICU), another record high. — Picture by Shafwan Zaidon
Follow us on Instagram, subscribe to our Telegram channel and browser alerts for the latest news you need to know.
By SHAHRIN AIZAT NOORSHAHRIZAM

This is the second time this month the country’s Covid-19 fatalities breached 100-mark within 24-hours, the highest was on June 2 at 126.

Health director-general Tan Sri Dr Noor Hisham Abdullah also announced 943 which is another record high of Covid-19 patients that have been warded in the intensive care units (ICU).

He said 450 of those in ICU need ventilators.

Of today’s deaths, 68 were those above 60 years old, an age bracket deemed to be high risk. Thirteen were aged 40 and below, including two 21-year-old men who died at Hospital Sultan Ahmad Shah in Temerloh, Pahang and Hospital Sungai Buloh in Selangor, respectively.

Ten were brought in dead.

All but nine of the deceased were Malaysians.

Only 15 did not have pre-existing health problems.

“A total of 103 death cases today involving 43 cases in Selangor, 18 cases in Kuala Lumpur, 12 cases each in Negri Sembilan, nine cases in Johor, six cases in Kelantan, four cases in Pahang, three cases in Melaka, two cases each in Sarawak and Kedah, as well as one case each in Sabah, Penang, Perak and Labuan,” Dr Noor Hisham said in a statement. 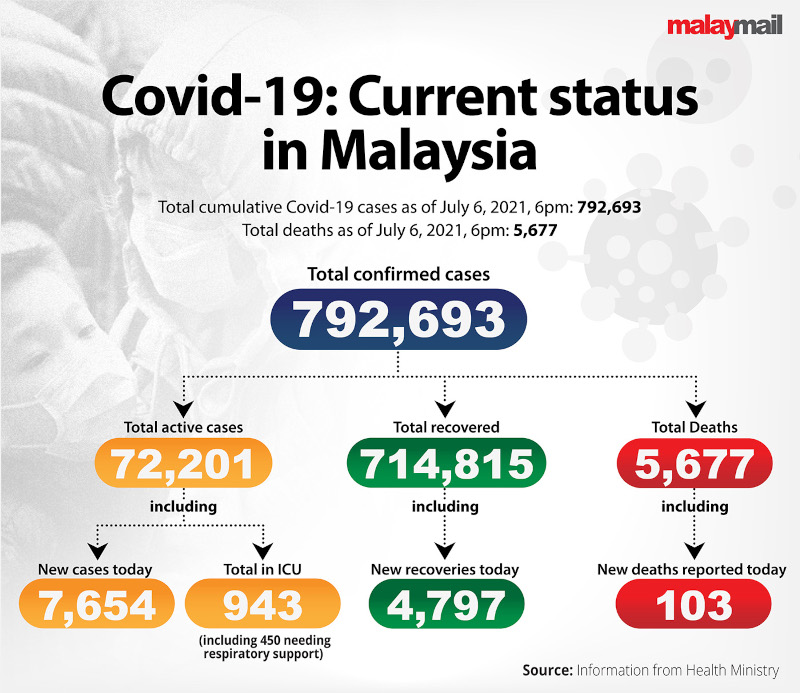