GEORGE TOWN, June 24 — The southern coast of Penang island is a secluded spot and a rich breeding ground for fish, prawns and crabs that have been the main livelihood of thousands of fishermen in the area and around Penang for decades.

It was the spot where Zakaria Ismail has been fishing since he was a child back in the 1970s.

“This is the place where I could get bountiful fish and prawns, sometimes I can earn up to RM700 per day from my catch,” he said during a Facebook live session at the Muslim Youth Movement of Malaysia Facebook page today.

The Sungai Batu fishermen unit chief said it was a misconception that fishermen could not earn a living at all and that they needed to get new jobs to get a stable income.

“It is true our income varies day by day but it was not as if we are not making a living, we are earning every day and at the same time, we are also providing a service, we are bringing fresh fish and seafood for the people, we are part of the food security chain,” he said.

He said there have been certain groups criticising him and the fishermen for protesting against the proposed Penang South Reclamation (PSR), also known as Penang South Islands (PSI), project.

“If you are not a fisherman, you do not know what it is like, how we depend on the sea for our livelihood, how we want to continue with this profession and how we are also providing food security for the people,” he said.

He said the southern coast of Penang island has an abundance of fish and prawns that even fishermen from other parts of the island would go there to fish.

“We are not territorial, anyone can come here to fish, our friends in Tanjung Tokong were so badly affected by the reclamation there that they would sometimes venture here,” he said.

With the PSI project soon to materialise, he said the fertile fishing ground at the southern coast of Penang island will be destroyed.

“You can forget about affordable fish and seafood that are wild caught here by our local fishermen,” he added.

The fishermen had already suffered the consequences of construction and sludge that had impacted the fishing grounds off the southern coast back when the second Penang bridge was being built.

The construction of the RM4.5 billion Sultan Abdul Halim Mua’dzam Shah Bridge started in 2008 and was completed and opened in 2014.

Zakaria said the sludge from the construction of the bridge, which linked Batu Maung on the southern side of the island to Batu Kawan on the mainland, had caused pollution on the fertile fishing grounds in the southern coast.

“We were badly impacted during that period when they were constructing the bridge and they were not even doing massive reclamation unlike this PSR project,” he said.

He said it took at least five years for the thick sludge to slowly disperse and for fish, prawns and crabs to come back to the site.

He could foresee that the reclamation of 4,500 acres to create three islands off the southern coast would bring even worse impacts and permanently destroy the natural marine ecosystem.

He hoped the state government and the federal government would cancel the project entirely to protect the marine ecosystem and the people’s food security.

“We are not against development, they can develop other places without destroying the environment, our livelihood and the people’s food security,” he added.

Zakaria had represented 185 fishermen to file an appeal to the Department of Environment against the PSI project back in 2019. 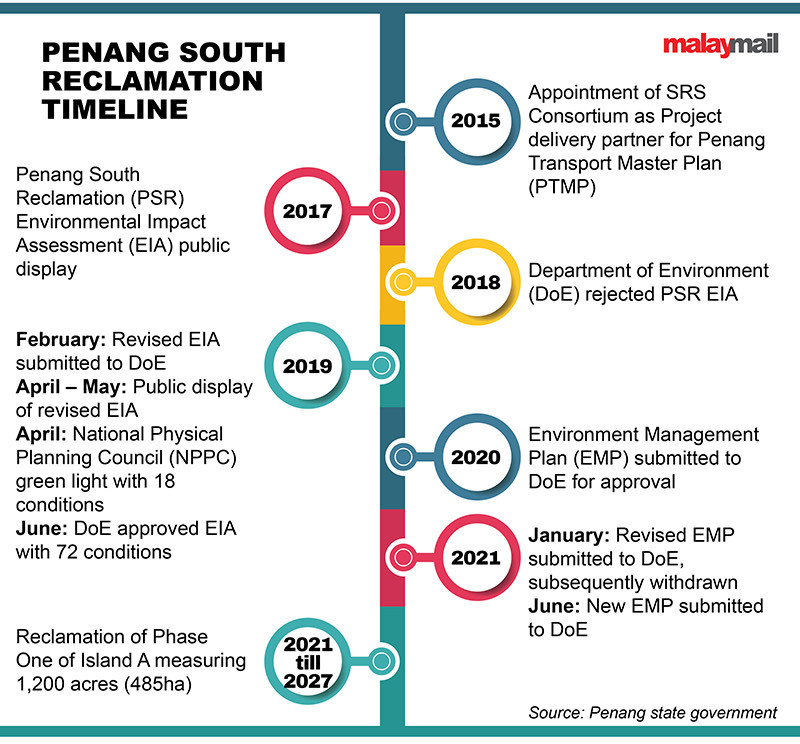