Ismail Sabri: EMCO at two localities in Kunak, Sabah from June 24 to July 7

Senior Minister (Security Cluster) Datuk Seri Ismail Sabri Yaakob said the enforcement is aimed at stopping Covid-19 infections from spreading beyond at-risk areas within these localities, which have recorded high numbers of cases based on screening tests conducted. — Picture by Miera Zulyana
Follow us on Instagram, subscribe to our Telegram channel and browser alerts for the latest news you need to know.

Senior Minister (Security Cluster) Datuk Seri Ismail Sabri Yaakob said the enforcement is aimed at stopping Covid-19 infections from spreading beyond at-risk areas within these localities, which have recorded high numbers of cases based on screening tests conducted.

“Until now, the Health Ministry has conducted 16 screening tests at Kampung Pangi Hujung, with 11 positive cases, while at Kampung JKR Lama, 15 positive cases were detected from 42 screenings done in the locality.

“After conducting a risk assessment with various agencies in the movement control order (MCO) technical committee and based on the Health Ministry’s advice, the government has agreed to enforce the EMCO in both localities,” he said in a statement regarding the MCO and EMCO today.

In addition, Ismail Sabri said the EMCO at Kampung Kebayau in Kota Belud, Sabah that was scheduled to end tomorrow would be extended for another two weeks till July 7 as there were still infections within the community and new cases in the locality.

Ismail Sabri said following a reduction in cases, the EMCO enforced in Taman Perdana, Lahad Datu, Sabah would be lifted at 11.59pm tonight while the EMCO in Kampung Sungai Obar, Batu 7 and Phase 9B Taman Indah Jaya in Sandakan, Sabah, as well as Kampung Sungai Penchala, Kuala Lumpur, will end tomorrow as scheduled.

The EMCO enforced in Kampung Sin San and Kampung Singgahmata, Pulau Banggi in Kudat, Sabah will also end tomorrow, a day ahead of schedule.

Touching on the MCO standard operating procedure (SOP) compliance, he said 959 individuals were detained for various offences yesterday, with 923 compounded and 36 remanded.

He said the offences included not practising physical distancing, failing to register themselves when entering premises, not wearing face masks and unauthorised interstate and inter-district travel, in addition to eating at eateries and carrying passengers over the approved limit.

He also advised the public to continue to comply with the SOP although the number of Covid-19 infections has dropped below 5,000 daily cases recently.

“In the current situation, we cannot be complacent as the trend of cases is still not stable and SOP compliance needs to be maintained by everyone to reduce the spread of infections and to flatten the Covid-19 infection curve.

“Therefore, I hope everyone will play their part including by being self-disciplined for the safety and health of all,” he added. — Bernama 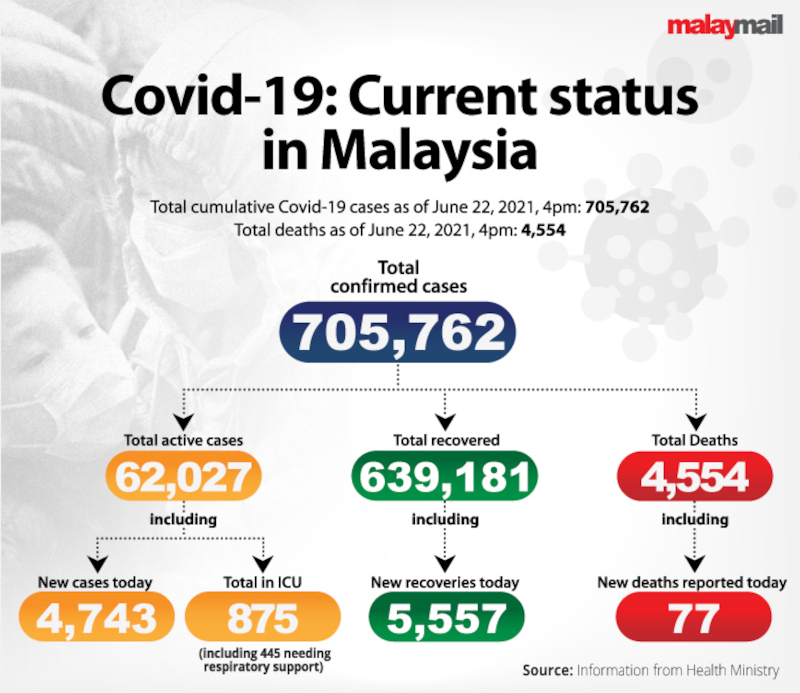