The use of plastic packaging has predictably surged, especially in the food delivery category as merchants seek to keep costs down while ensuring food safety. — Picture by Sayuti Zainudin
Follow us on Instagram, subscribe to our Telegram channel and browser alerts for the latest news you need to know.

KUALA LUMPUR, Dec 7 — Plastic waste, instead of decreasing as planned, is on the rise due to Covid-19, threatening to derail the country’s fledgling environmental efforts.

Since the beginning of the pandemic, when stay-at-home advisories became effective, people have steadily moved their lives online and getting their meals, groceries and goods delivered.

The use of plastic packaging has predictably surged, especially in the food delivery category as merchants seek to keep costs down while ensuring food safety.

Plastic waste usually comprises slightly more than 13 per cent of all municipal solid waste in Malaysia.

Plastic, other than being extremely useful, versatile and durable, is insidious. Because of said virtues, the chances of humans ever giving up plastic is slim to none.

Since it was created in 1869, the material has been pervasive, showing up in everyday items from cosmetics to cars.

Up to August this year, according to the Malaysian Plastics Manufacturers Association, plastic production has grown by 0.7 per cent, compared to five per cent in the same period last year.

Plastic lasts forever in the environment; not degrading after it has outlived its usefulness. To put it into context, we are living with plastic trash manufactured at the turn of the last century.

An Arizona State University study on human organs released in August confirmed microplastics are in our bodies and studies have also found plastic in animals.

When the movement control order (MCO) was announced in March, many businesses in the food and beverage industry realised it meant higher plastic use and therefore more plastic waste. Some took steps, such as limiting the use of plastic products when serving their customers by using cardboard takeaway containers instead of plastic and asking diners to forego plastic cutlery.

But even then, little can be done to cut plastic completely out of their take-out and delivery system, not unless they wanted to risk food safety and reduce risk of transmission of the coronavirus.

“(However) we still use plastic, but our plastic is degradable plastic. Last time, we used paper bags but for delivery, it is quite challenging … on rainy days, rainwater would soak into the paper bags,” he said.

He added that as restaurants have a small profit margin, it is not unusual for vendors, especially the smaller ones, to use plastic packaging instead of the more expensive and less secure paper and cardboard containers to deliver their goods.

Another contributor to the plastic waste increase is the dearth of alternative packaging.

“You’re buying a lot more packaged food. As you consume the food, there’s more waste generated out of the household. And generally, most packaging now is plastic,” said Mizan.

The waste management expert added there was little incentive to reduce its use due to the low cost and convenience of plastic. 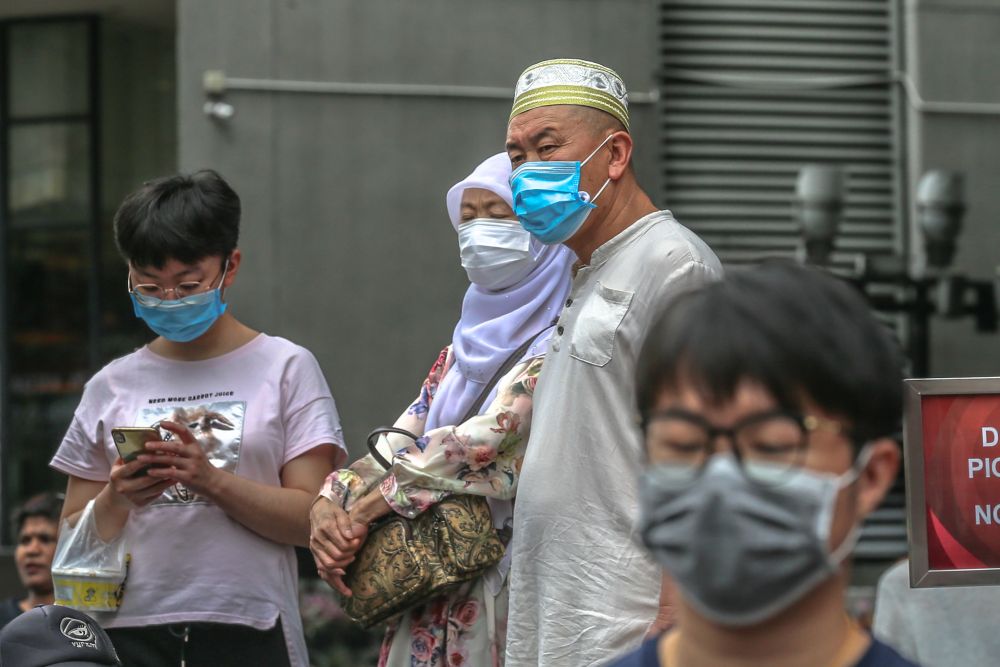 Face masks are not recyclable, and neither are food containers that still have food residue in them. — Picture by Firdaus Latif

So people are using more plastic products because of the pandemic. But can’t people just recycle more to make up for it?

Solid Waste and Public Cleansing Management Corporation (SWCorp Malaysia) Federal Territories director Mohd Zahir Shari said recycling went up because people were spending more time at home and as such, had more time to process and separate their trash for recycling.

However, the pandemic also created other complications in recycling and waste management.

“Recycling went up during the MCO. But you have to keep at it,” he said.

In the end, it was not enough to offset the increased use of plastics.

One complication is that many of the plastic products that have seen increased usage are not recyclable. Face masks, for instance, are not, and neither are food containers that still have food residue in them.

Another is that the pandemic has shut off the informal contributor to recycling in Malaysia: the scavengers who collect recyclables from households, in dumpsters and on the streets.

Mizan said many waste-pickers have not been able to continue their activities during the pandemic out of fear of contamination or exposure to the coronavirus, saying it has derailed Malaysia’s efforts to reduce plastic waste.

“Because of contact, people are worried that recovering post-consumption plastics could expose them to some element of danger, infection or Covid-19. So nobody is fishing plastics out of the general waste anymore,” he said.

“Some people say it’s biodegradable but it’s only biodegradable under specific conditions. For example, there (has to be) enough oxygen, enough sunlight … but the same plastic immersed in water won’t biodegrade,” said Mizan.

What doesn’t get or cannot be recycled ends up in landfills, or in some places, incinerators.

The rest, either via littering or illegal dumping, ends up in the oceans, according to Prof P. Agamuthu, a solid waste management researcher at the Institute of Biological Sciences, Universiti Malaya.

Acknowledging the risk of plastic pollution and microplastics, the government launched the Roadmap Towards Zero Single-Use Plastics in 2018, which aims to eradicate single-use plastics in 10 years.

Although slotted for this year, public education and awareness messaging have not taken off. However, other aspects of the roadmap, such as a pollution charge for plastic bags and giving plastic straws only on request, are becoming a policy in all states.

However, most experts think current efforts are too weak or too little considering how much plastic use Covid-19 has sparked. They say the commitment required to effect the necessary changes to reduce plastic and protect the environment has been slow in coming.

“If you want to achieve a real reduction in plastic usage, the ban (on single-use plastics like plastic bags) has to be a total ban. We should not just talk about banning plastic or charging for plastic. We should give them a substitute so they will have another option,” Agamuthu said.

He said Malaysia needed to develop other options for reducing plastic, such as following the example of China and using organic materials to replace plastic.

Mizan echoed Agamuthu’s sentiments, saying a commitment to change was needed as every generation becomes more aware of environmental issues.

“(The younger generation) are more aware but it has not translated into action. It’s the economic factor that is driving their behaviour,” he said.

Ahmad agreed, saying he has not noticed any difference in plastic consumption between the older and younger generation.

As such, he said the government and interested groups have to be more aggressive in changing people’s mindset and attitude over plastic.

“We have to educate people to change their way of life,” he said.

He admitted changing mindsets is an uphill battle, citing the group’s experience at Pulau Ketam, Selangor.

The MNS has had a project to educate residents and clean up Pulau Ketam, which has a huge trash problem caused by garbage deposits from the mainland and from its residents.

“People don’t see (the need to protect the environment) until (something bad) happens in front of their eyes,” he said. — Bernama