The bulk of Selangor’s cases came from the Teratai cluster, linked to Top Glove Corporation Bhd's foreign workers. — Picture by Yusof Mat Isa
Follow us on Instagram, subscribe to our Telegram channel and browser alerts for the latest news you need to know.
By R. LOHESWAR

KUALA LUMPUR, Dec 1 — Selangor topped the number of new positive Covid-19 cases today with 891 out of a total of 1,472 new cases, the Health Ministry reported today.

The bulk of Selangor’s cases came from the Teratai cluster linked to Top Glove Corporation Bhd that involved foreign workers at several factories in the district of Klang, Kuala Selangor and Kepong.

A total of 778 cases were reported in the Teratai cluster. Of the total number of cases today, five were imported cases.

“Since November 7, 6,603 individuals in the Teratai cluster have been screened and from that, 5,056 positive cases were detected involving 331 locals and 4,725 foreigners.

“As many as 1,501 individuals tested negative while 46 are still awaiting their results,” its director-general Tan Sri Dr Noor Hisham Abdullah said in a statement today.

“As such, the Health Ministry welcomes the defence minister’s announcement to extend the enhanced movement control order at the workers’ hostels from today until December 14.

while authorities conduct thorough screening of workers as well as take preventative measures.”

Dr Noor Hisham also revealed that there were three deaths today, bringing the total number of deaths to 363.

Death #361 was a 64-year-old female from Sabah who died at Hospital Tawau. She had a history of diabetes, high blood pressure and intestinal cancer.

Death #362 was a 51-year-old male who died at Queen Elizabeth Hospital in Sabah. He had a history of high blood pressure, diabetes and heart disease.

Death #363 was a 24-year-old male who died in Queen Elizabeth Hospital in Sabah.

Apart from that, there are currently 120 positive cases in the internal care unit, with 44 in need of the ventilator. 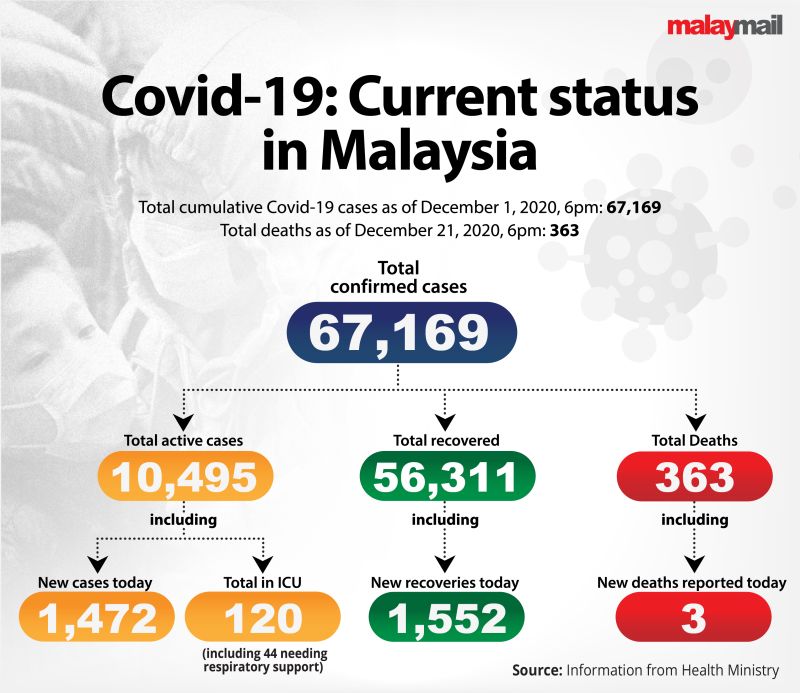