Soldiers and police officers conducting checks at a roadblock during the movement control order (MCO) in Kuala Lumpur March 29, 2020. — Picture by Firdaus Latif
Follow us on Instagram, subscribe to our Telegram channel and browser alerts for the latest news you need to know.

KUALA LUMPUR, March 30 — Cheras in Kuala Lumpur and Jerantut in Pahang are now orange zones or Covid-19 hotspots with between 20 to 40 cases, while Malaysia only has 35 districts that are free of Covid-19 cases as Keningau has as of yesterday recorded its first case, the latest data from the Health Ministry shows.

Based on the latest maps showing the number of Covid-19 cases according to district as of March 28 and if the Health Ministry’s designation is to be applied to Putrajaya too, there are now 11 orange zones throughout the country which have each recorded at least 20 cases.

This marks an increase from the eight orange zones as of March 26, as Cheras which had 19 Covid-19 cases then had increased its tally to 25 cases on March 27, further maintaining this figure as of March 28.

If the federal territory of Putrajaya — which only had 18 cases on March 26 before growing to 20 cases on March 27 and maintaining this tally as of March 28 — is to be considered as a district, it would also be part of the list of orange zones. (The Health Ministry’s own map did not indicate whether the entire federal territory of Putrajaya would also be considered an orange zone.)

What is the significance of being an orange zone? Well, it only takes several cases for an area to tip over and be recategorised as a red zone.

According to the Health Ministry’s designation of hotspots, districts with the colour code orange are those where between 20 and 40 Covid-19 cases have been recorded, while those known as the red zones are where more than 40 cases have been reported.

As of March 28, the 11 orange zones nationwide with the highest number of cases are Batu Pahat in Johor and Lahad Datu in Sabah at 34 each, Seberang Perai in Penang and Kota Kinabalu in Sabah at 30 each, followed by Kuala Muda in Kedah at 29. 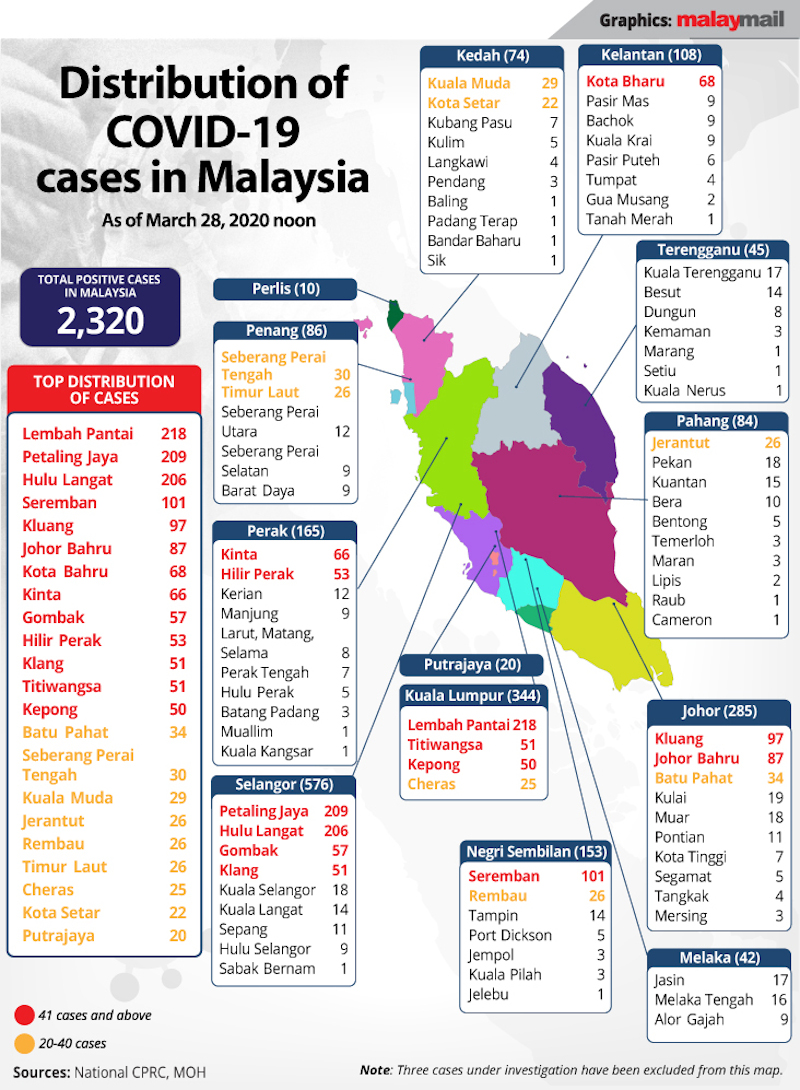 No new red zones, but more villages under lockdown

It may be a relief to note that there has been no addition on March 28 to the 15 red zones nationwide that were recorded on March 26, but the number of cases in the red zones have continued to grow within those two days.

As of March 28, numbers have worsened in all the 15 red zones as compared to March 26, with some adding on far more Covid-19 cases compared to the others.

Over in the only two red zones in east Malaysia, Covid-19 cases in Kuching in Sarawak also grew to 72 cases (March 28) as compared to 52 (March 26), while Tawau’s tally grew to 57 cases from 50 cases during the same period.

Malaysia is currently in the middle of a month-long movement control order (MCO) until April 14 that aims to slow the spread of Covid-19.

Although being designated as a red zone does not necessarily mean more restrictions of movement, the government has stepped up controls in selected villages — with a high concentration of Covid-19 cases — in red zones.

Last night, the government announced yet another enhanced MCO, this time in seven villages in red zone Hulu Langat in Selangor from March 30 to April 13.

The enhanced MCO on 3,918 residents in the seven villages from Batu 21 to Batu 24, Sungai Lui, Hulu Langat came after the Health Ministry detected 74 positive Covid-19 cases out of 274 residents of a tahfiz school in Batu 23, Sungai Lui. Who has been hardest hit

Logically, the states or federal territories with higher number of red zones also tend to be the ones more severely affected in terms of number of cases, especially Selangor — which has four red zones — accounting for 576 or almost 25 per cent of Malaysia’s total 2,320 Covid-19 cases as of March 28.

For the rest of the states that only have one red zone each, Sabah has 197 cases as of March 28, while Negri Sembilan has 153 cases, Sarawak has 118 cases, and Kelantan has 108 cases as of the same day.

The latest list according to state and federal territory On the far end of the opposite spectrum as compared to the orange and red hotspots, there are only 35 districts throughout Malaysia as of March 28 that have yet to record any Covid-19 cases.

As of March 28 however, the number fell to 35 when Keningau in Sabah recorded its first case. 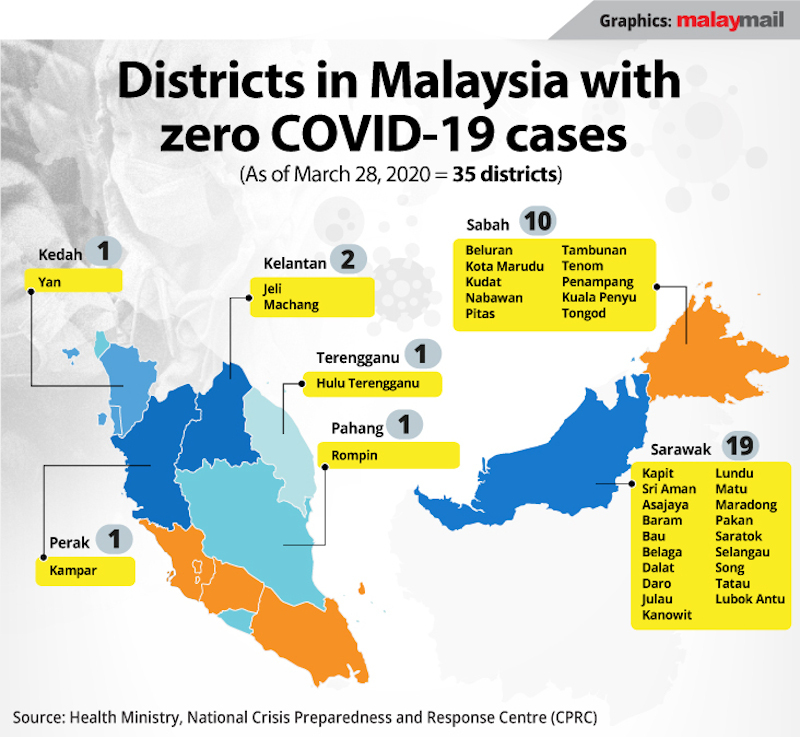 As it stands now, the eight deaths announced yesterday brings the Covid-19 death toll in Malaysia to 35.