The groups added that they also did not trust the government to have an exhaustive list of all vulnerable communities in need to assistance. — Picture by Hari Anggara
Follow us on Instagram, subscribe to our Telegram channel and browser alerts for the latest news you need to know.
By YISWAREE PALANSAMY

KUALA LUMPUR, March 29 — Over 120 groups are jointly urging the government to reconsider its move to stop them from sending food to households at risk during the movement control order (MCO).

Putrajaya announced the move yesterday to try and reduce individual movement, directing such groups to send their aid supplies to government departments and agencies that will then redistribute these.

In a statement today, the 127 NGOs said Putrajaya should allow them to continue their work in a safe manner and suggested that the government was underestimating the effort involved.

“We certainly appreciate the gravity of the Covid-19 situation, and are fully committed to assist the government in every possible way to battle Covid-19 and stop the spread of the virus.

“At the same time, we are concerned that there is a lack of appreciation as to just how many vulnerable communities are affected by the movement control order, and are having difficulties accessing basic necessities such as food.

“These communities include the B40, urban and rural poor, Malaysians who have lost their income as a result of the MCO, the elderly, the house bound, the sick, orphans, orang asli, migrant workers, refugee communities, and many, many more,” the organisations said. The groups added that they also did not trust the government to have an exhaustive list of all vulnerable communities in need to assistance, to want to take over serving them immediately.

They added that NGOS were not supplanting the government’s efforts, explaining that the #KitaJagaKita concept trending on social media was also not meant to imply any failure on the government’s part.

The group said that it was only to highlight the severity of the Covid-19 crisis and the need for society to care for those in need.

“We plead to the government to allow all NGOs that have been distributing food, medicine and other aid to be allowed to continue doing so in a way that is safe and responsible, in full cooperation with the government, and in accordance with the health and safety guidelines of the government.

“We are certain NGOs involved will continue taking every required measure, including the consistent use of hand sanitisers and masks, social distancing, and the minimising of the number of people involved,” they said, adding that everyone must do their part together as a united nation.

Senior Minister Datuk Seri Ismail Sabri Yaakob announced yesterday that groups feeding the poor and homeless during the MCO will be asked to stop and divert their supplies to government agencies that will take over the activities.

Those who used to feed the homeless like soup kitchens and welfare homes have struggled to get food to feed the needy during the MCO.

The senior minister said the move was to minimise individual movement during the MCO as the spread of Covid-19 has yet to abate.

Malaysia recorded another 159 new cases despite being 11 days into the MCO, bringing the country’s total infections to 2,320 with 27 deaths. 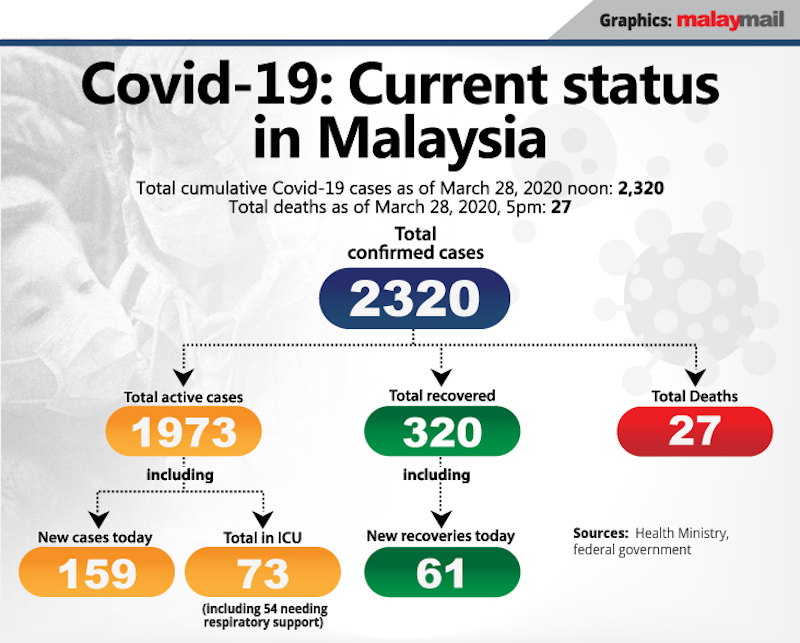