PM: Malaysia under movement control order from Wed until March 31, all shops closed except for essential services

KUALA LUMPUR, March 16 — Malaysia will be under a nationwide movement control order from this Wednesday (March 18) until March 31 due to the Covid-19 outbreak, Prime Minister Tan Sri Muhyiddin Yassin announced today.

The prime minister said that the government has decided to implement a ‘restriction of movement order’ under the Prevention and Control of Infectious Diseases Act 1988 and the Police Act 1967.

“The government’s priority now is to avoid the spreading of new infections, which will affect more people.

“Therefore, drastic action needs to be taken. The government has decided to implement ‘restriction of movement order’ starting from March 18 to March 31,” he said in a special announcement broadcast on Astro Awani, RTM, TV3 and BernamaTV.

Muhyiddin said this means that all business premises have to be shut down, except for outlets such as supermarkets and grocery stores selling daily essentials.

He said all government and private premises would be closed during the movement control order, except for essential services such as utilities, telecommunications, transport, banking, health, pharmacies, ports, airports, cleaning and food supplies.

He said that the movement control order also means all Malaysians will be banned from travelling abroad, and that no tourists or foreigners will be allowed to enter the country.

“Malaysian who have returned from abroad have to self-quarantine for 14 days,” he added.

“All private and public higher learning institutions together with vocational training centres will be closed nationwide,” he said.

Muhyiddin said that the government is aware of the difficulties and troubles that will be faced by Malaysians due to this decision, but stressed that it has to be taken in order to curb the spread of Covid-19 that could cause fatalities.

“We have seen how drastic the cases have increased in so many countries and we don’t want the same thing to happen here. Thus, controlling the movement of the public is the only way to avoid people from being infected,” he said.

“Don’t worry and panic. Always remain calm. I believe, with this measure in place we can curb this infection in the near future. I urge everyone to follow the orders,” he added.

Muhyiddin also assured that there would be enough supplies of food, daily needs and healthcare products, including face masks, and they would be available for all.

He also said that a special meeting of the National Security Council will be chaired by him daily to monitor and oversee the Covid-19 situation.

The Health Ministry today confirmed that 125 new Covid-19 positive cases have been reported, with 95 cases linked to one cluster alone.

This brings the total number of positive cases in Malaysia to 553, with 42 having since been declared free of Covid-19 and discharged. 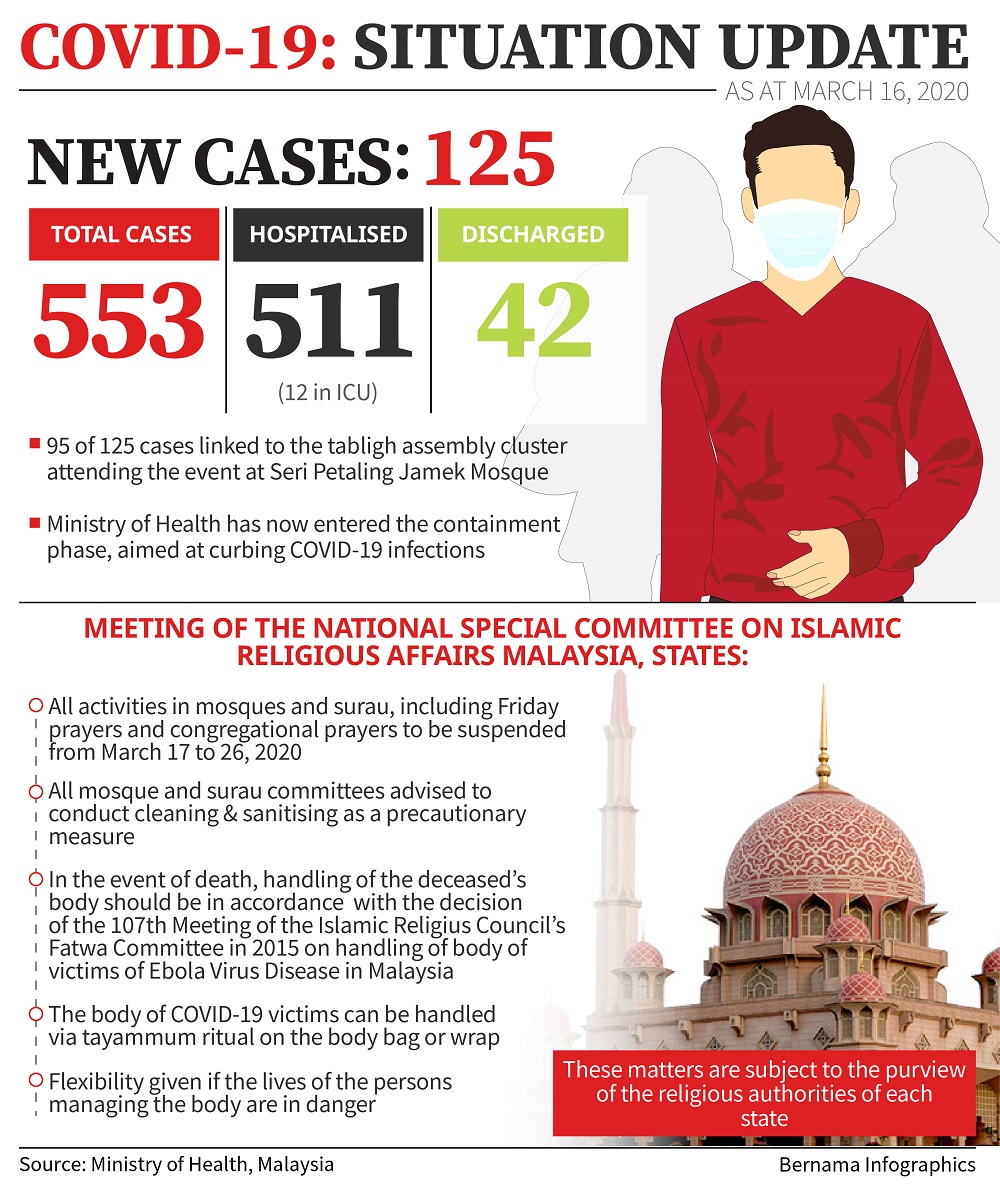